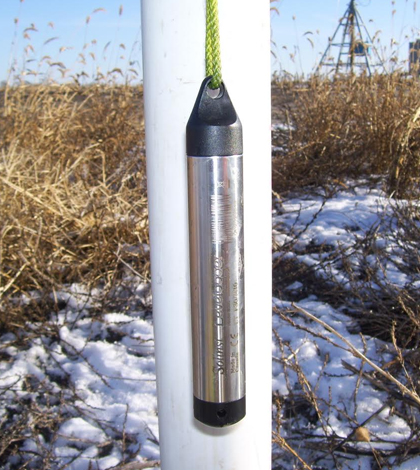 Groundwater managers everywhere need data to best conserve the resource, and they commonly obtain those through water level sensors. Installed at key points of interest, the sensors give precise information on the fluctuations underway.

But for the general public, these exact level measurements are something rarely seen. And as a result, there is a lot of misconception of groundwater supplies in many parts of the U.S.

This is true in northern Indiana and southwest Michigan, where folks routinely drive by crop fields getting watered by liquid pulled up from underground. Because of that, many of them believe that groundwater pumping is harming aquifers.

But the reality is that it isn’t, says Todd Feenstra, L.P.G., owner of Tritium, Inc. The company currently has more than 60 Solinst water level sensors in monitoring wells throughout the region. More loggers are deployed in 10 vented stream gages in nearby areas.

“Simply put, there is a great need to ‘Define the Resource.’ Very few people have a good understanding of how vast and valuable the groundwater resources in southwest Michigan and northern Indiana are,” said Feenstra. “There is also a lack of understanding, at all levels, of the impact of high-capacity groundwater pumping on the aquifers and surface waters.”

Much of the large-scale network, covering six counties in the two states, was installed beginning in 2009. In 2014, Feenstra and others at Tritium, Inc. began to integrate Solinst loggers based on ease of use, reliability and cost. A water level sensor is housed in this groundwater monitoring well at a farm site. (Credit: Todd Feenstra / Tritium, Inc.)

“There is not a specific aquifer we are looking at. Virtually all the high-capacity wells in our study areas are installed within unconsolidated, glacial sediments. The geology and hydrogeology is very complex within multiple aquifers and aquitards at most locations,” said Feenstra. “The primary generalized geologic sequence, from the ground surface down, is a three-layer system comprised of an unconfined aquifer at the surface, an aquitard and a deeper leaky-confined aquifer.”

Tritium, Inc. staff downloads data from water level sensors every few weeks. And the network has revealed a lot of interesting insights about the region’s groundwater over the years.

These include determining the hydraulic characteristics of aquifer systems, monitoring the impact of irrigation on aquifers and surface water and predicting long-term impacts on the environment and other water wells.

“We see repeated cycles of pumping (short and long duration) with full recovery. Groundwater level recovery time is equal to or less than the pumping time,” said Feenstra. “… The groundwater resources are vast, resilient, responsive and a singularly unique resource with tremendous value.”

Other trends he’s noticed include a clear rise in groundwater levels when the spring frost comes out of the ground and that levels respond almost instantly to changes in pumping rates. And there is no evidence of groundwater mining, even in some of the most irrigated areas. Feenstra says that groundwater managers commonly use the water level information to compile numerical models, predict drawdown for pumping periods in anticipation of drought and to gauge interference on nearby water wells and lakes.

“(Data are also used in) irrigation season levels to demonstrate full recovery and to provide opportunity for multiple pumping tests,” said Feenstra. “(And) aquifer performance testing to obtain hydraulic characteristics of the aquifers and aquitards.”

Moving forward, hopes are to expand the network of water level sensors by another 50 monitoring wells by the end of 2016.

“‘Define the Resource’ has become our mantra. … Data collection is paramount. Greatly increased data collection is critical to define the hydraulic characteristics of the aquifers, measure the impacts of groundwater pumping and define the long-term seasonal variations,” said Feenstra. “There is also a tremendous need for these improved datasets in order to create predictive models that reasonably represent the area.”

Other groups gathering similar data in the region include seed corn companies that gather infiltration measurements in fields. Growers use soil moisture sensors to gather measurements to inform irrigation needs. IDNR has three active groundwater monitoring wells in northern Indiana that are part of the National Groundwater Monitoring Network backed by the USGS, which has active gages at several locations in southern Michigan and northern Indiana. MDEQ is collecting miscellaneous stream discharge measurements across the state’s southwest.