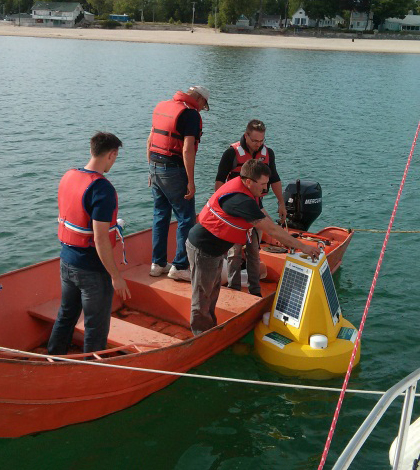 A Niagara Region crew deploys a water quality data buoy at one of the beaches the test for swimmer safety. (Credit: Doug Nguyen)

The Niagara Region of Ontario has more water going for it that its famous falls. Between Lake Erie to the south and Lake Ontario to the north, the regional government tests more than 25 public beaches to ensure the water is safe for swimmers.

But when public health officials learned that gaps in the standard testing protocols could lead to unsafe beaches being left open or safe beaches kept closed, they put a plan in motion to join the shift in beach science towards more timely predictions based on real-time water quality data.

The Niagara Region’s issues were part of a growing recognition that the “persistence model” of monitoring for E. coli — an indicator of harmful pathogens in swimming water — isn’t always adequate.

“We sample today and kind of assume that whatever the result is is going to persist the next day or for future days,” said Glen Hudgin, environmental health manager with Niagara Region. “If we get a good result on yesterdays sample, that means the water quality is going to be good for another week until we sample again. And certainly that’s not the case.”

The regional government gets its beach testing mandate from the province of Ontario, which has a minimum standard of testing beaches using that model just once a week. Hudgin said they tried testing some beaches every day to see how E. coli levels fluctuated, and the results suggested they weren’t provided the best service to beach-goers. “We discovered that there were lots of days where there would be spikes in E. coli that we didn’t catch in time because of the lag in getting reports back from the lab,” Hudgin said. And those spikes would lead to closures the following day even though E. coli levels had fallen back.

The region may have a solution in predictive modeling, a beach monitoring method that’s catching on in the United States and has been recommended by the U.S. Environmental Protection Agency. It relies on real-time water quality and weather data collected by sensors that are sometimes installed directly on the beach and in the water. Customized computer models take in those data and generate a prediction of E. coli levels.

A “Nowcast” system in use across several U.S. Great Lakes cities is a prominent example of predictive model beach advisories at work. In 2013, the U.S. Geological Survey reported progress on models for dozens beaches in Ohio, Wisconsin and Illinois. The City of Chicago expanded a predictive model pilot program to all 24 of its beaches shortly after that.

Like the Chicago system, the Niagara Region’s predictive models use data from weather stations and water quality buoys installed at the beaches. The buoys are equipped with YSI 6600 multi-parameter water quality sondes collecting water temperature, turbidity, total dissolved solids and wave heights. Hudgin said they experimented last summer with SonTek Argonaut-XR current meters for velocity measurements but found that their location within the surf zone led to them getting turned over in bad weather or buried in sand. The data collected by the buoys every fifteen minutes is radioed to weather stations on shore. Sensors there measure wind speed and direction, rainfall, relative humidity and solar radiation. Both the water quality and weather data are transmitted from there via satellite to an online data management system.

So far, the agency has buoys and weather stations in Lake Ontario at Lakeside Park in Port Dalhousie, and Lake Erie at Long Beach in Wainfleet and Crystal Beach in Fort Erie. They chose those beaches based on how prone their are to E. coli fluctuations and their popularity. Fort Erie beaches are especially popular, Hudgin said, attracting both Canadian and American tourists.

The models for the Niagara Region beaches were originally based on data from other locations as they waited for information from their own sensors to accumulate. The models are still under development and aren’t yet accurate enough for the agency to base their beach closures on, but they plan to post results from both the persistence model and the predictive model on their website this summer, Hudgin said.

“We’re collecting a tremendous amount of data,” he said. “We haven’t nailed it all down yet, but as we continue from year to year to collect this data, we feel that we’re going to get better and better at understanding what’s going on.”

Top image: A Niagara Region crew deploys a water quality data buoy at one of the beaches the test for swimmer safety. (Credit: Doug Nguyen)