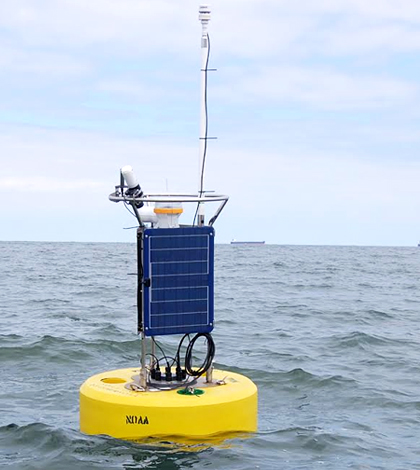 Recent studies of changes to global climate have identified higher than expected acceleration in the warming of waters off the Arctic coast. The higher temperatures are linked to sea ice loss which is leading the growing anticipation of new Arctic shipping routes.

The projected expansion in maritime activities within Arctic waters has commercial, non-governmental and government agencies, including the National Oceanic & Atmospheric Administration’s (NOAA) National Ocean Service (NOS), actively planning and preparing. An example of this is the NOS’s Center for Operational Oceanographic Products & Services (CO-OPS) currently testing and developing systems for real-time monitoring of oceanographic and meteorological parameters in infrastructure-limited areas which can be applied in northern Arctic regions.

CO-OPS’ scientists and engineers are working on options for coastal ocean monitoring stations that can provide measurements critical for maintaining the National Water Level Observation Network (NWLON), which contains more than 200 long-term observatories throughout the United States’ coastal waters.

Recent station designs for remote coastal locations have a seabed platform (e.g., bottom mounts from Mooring Systems Inc.) with multiple sensors that measure pressure (for water level determination), salinity and temperature. Long-term system deployments in North Alaska will present installation challenges corresponding to each specific site of interest. For example, these stations need to keep operating for several years, even in harsh conditions, and one option to achieve this is to run a cable from an offshore station to a station onshore. Short-term installations use similar bottom-mounted sensors as above, but are for temporary requirements, like filling gaps in monitoring during ice-free conditions, or supporting NOAA hydrographic survey applications or modeling applications. These bottom mounts are linked to surface buoys with acoustic modems which allow for the data to be relayed from the bottom mount to the buoy which then uses satellite telemetry for relaying data back to facilities on shore for researchers to have access to near real-time data.

Since the Alaskan offshore is a new locale for the observation network, researchers at NOAA are refining monitoring system design through Atlantic Coast field testing before any systems are placed along the remote coasts of North Alaska.

Steady operation of long-term pressure gauge systems in deep, offshore ocean sites has already been studied by the agency, while recent efforts by CO-OPS have focused on nearshore, real-time applications. One deployment of the buoy and bottom-mount system has been completed in the Chesapeake Bay, followed by another, more recent test deployment (September through November 2015) using the same buoy in St. Andrews Sound, Georgia along the Intracoastal Waterway.

“The main objective is to develop real-time systems that can be used in remote regions with very limited coastal infrastructure,” said Robert Heitsenrether, a physical scientist at NOAA. “Recently one area of primary interest is the Arctic Coast of Alaska,” but having such systems would also be useful in keeping the agency’s hydrographic charts up to date or providing ships and freighters with information on the water.

At the outset, NOAA scientists had a good idea for the type of short-term system they were looking to develop. Heitsenrether says the team was looking to build a platform for their needs, which included a buoy with a large instrument well, solar power and a weight of less than 300 pounds, so that it could be deployed easily from a small vessel. Aside from the buoy and power system, they also wanted to do all the system integration themselves, which would let them design and select the best mix of gear for NOAA’s needs.

A NexSens CB-950 Data Buoy was purchased to serve as the platform’s base. The researchers added a Sutron Xpert data logger to its well, which coordinates with a bottom-mounted Seabird SBE 26+ pressure sensor and a seabird Conductivity, Temperature and Density sensor (CTD) and topside Airmar weather station. Also mounted on top of the buoy are a GPS unit, to let managers know the platform’s location at all times, and Iridium satellite communications gear. Its first deployment, in Chesapeake Bay, took place in the fall of 2014 and was impacted by some setbacks. This included a nor’easter storm event that knocked out the data logger just five days after the buoy had been deployed. Going through the troubleshooting and repair process caused some headaches, but eventually, the buoy was repaired and redeployed for a short success at the tail end of the test. The researchers learned a lot along the way, Heitsenrether says, and as a result the 2015 version of the system was significantly improved.

So for the second go-around in St. Andrews Sound, Georgia, the enhanced system was deployed for a 60-day test from September through November 2015.

A cellular modem has been added to the platform, which can be turned on or off through commands sent to the Iridium modem onboard. That addition lets researchers communicate with the buoy remotely from any location. For the more-extreme situations, there is also a WiFi module that makes it possible to interface with the data logger from a boat within 100 feet of the buoy.

“We can hang a modem over the side of the boat,” said Heitsenrether. “It’s doable. It’s just not convenient.”

Those improvements proved to be very helpful as the scientists embarked on conditions in the St. Andrews Sound, which present more currents than the buoy has dealt with so far. In the Chesapeake Bay, there was more wave energy, but less currents and a significantly smaller tidal range, Heitsenrether says.

This most recent field test successfully concluded in late November. The bottom-mount and buoy system completed 60 days of real-time operation, with greater than 95 percent data throughput.

“The big picture idea — pending funding and planning — is to test deploy this system at a site in Alaska within the next year or two. The plan is to take it up to the North Coast of Alaska somewhere,” said Heitsenrether. “As far as the two tests we’ve conducted, our team considers the system design to be mature enough for operational applications. There are a few minor system refinements to implement this year but the system should be ready for a test in Alaska this coming summer.”