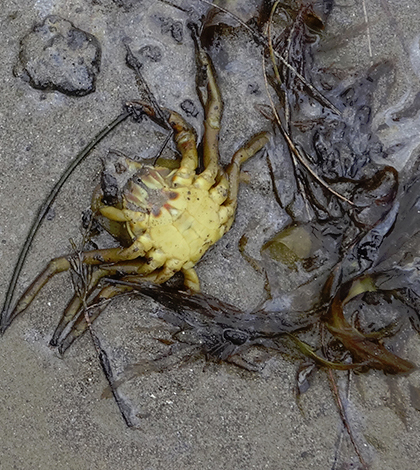 NOAA has released the software program CAFE to help responders dealing with pollution answer two important questions: What’s going to happen to the contaminant released and what, if any, species will be harmed by it? (Credit: Beckye Stanton, California Department of Fish and Wildlife)

When an industrial accident results in a chemical or oil spill, respondents race against time to clean the mess up. But with nearly any spill, a certain level of environmental contamination is to be expected. The more the responders know about the properties of the spilled material, the better they can mitigate damage to local flora and fauna.

The National Oceanic and Atmospheric Administration released a new piece of software to the public that provides information about the fate of spilled toxic materials and what animal species might be affected. The Chemical Aquatic Fate and Effects (CAFE) database contains entries on more than 35,000 toxic materials, including oils and dispersants, industrial chemicals and pesticides.

Those entries address many chemical and physical properties of a subject material, including density, water solubility, flashpoint and molecular structure. The database also provides information on a chemical’s photo-oxidation and biodegradation rates so that responders know how long traces of the chemical will survive in the environment.

Jim Farr, a NOAA chemist and CAFE developer, said the database is six years in the making and, as a result, is incredibly comprehensive.

“Basically just about every toxic material that we use and know about is in this database,” Farr said. “It’s a tool I would have liked to have had when I first started my job with NOAA, actually.”

Farr works for NOAA’s Office of Response and Restoration, one of the primary responders to the 2010 Deepwater Horizon rig explosion and oil plume in the Gulf of Mexico. In fact, Farr said, his team’s response to the incident forced him to delay work on CAFE by about two years. CAFE presents a step-by-step questionnaire that helps users determine the ecotoxicity of a material in any aquatic ecosystem. After the user inputs details about the size of a spill, known species in an area, and the materials involved, CAFE produces a graphical curve showing comparative toxicity to different species over time at various chemical concentrations.

“It’s a very quick way to determine how dangerous a material is in an aqueous environment,” Farr said.

The software can assess contamination across a range of time scales, from a matter of hours to days.

“Generally, people run these tests for 24 hours,” Farr said. “In our scenarios, we very rarely have situations where the organism is going to be exposed for that period of time. If the chemical is spilled into a waterway or a river, the current carries the chemical downstream — fish in that river might only be exposed to that chemical for an hour or two.”

“We have a to-do list,” Farr said. “One of the main things that we need to be sure we’re doing is keeping up with our sources of data.” Farr noted that ECOTOX is updated four times each year, and while a quarterly CAFE update is out of the question, he would like to see the database replenished annually.

The CAFE user interface was designed for ease of use, and while there are some complicated technical aspects that could pose a challenge for people without some chemistry expertise, Farr said the included manual and how-to documentation should make it possible for anyone to generate ecotoxicity curves after some reading.

“I envision this more as a tool for practitioners in the field than the lay public, but that’s not to say that they couldn’t download it and, with a little study, understand quite a bit about it,” Farr said.

What’s more, there’s nothing stopping a layperson from experimenting with the software. CAFE is available freely to the public on the Office of Response and Restoration’s website.

Top image: NOAA has released the software program CAFE to help responders dealing with pollution answer two important questions: What’s going to happen to the contaminant released and what, if any, species will be harmed by it? (Credit: Beckye Stanton, California Department of Fish and Wildlife)