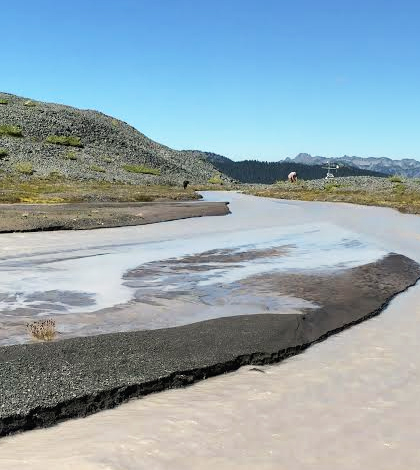 In Washington state’s Nooksack Watershed, home of the Nooksack Indian Tribe, much of the sediment transported in streams comes from natural processes. But still others contribute to the overall sediment loads, including the harvesting of timber, agricultural activities and land developments.

Tribe members question how these sediment loads are impacting the habitats and survival of threatened Chinook salmon that use the watershed for spawning. Also of interest is the increasing role that climate change is playing in affecting the region’s terrain, with factors like drought and temperature change impacting glaciers in the watershed.

To get at the answers, tribal researchers keep a close eye on turbidity, a parameter that fluctuates depending on a variety of factors.

“We have about 15 routine sites where we collect turbidity measurements in primarily agricultural land in the Nooksack River Watershed of Whatcom County, Washington,” said Jezra Beaulieu, water resources specialist with the Nooksack Indian Tribe. “We have another four locations in the upper watershed, two of which are glacially fed and two of which are snow-fed, in order to decipher differences in sediment output of contrasting watersheds.”

At the agricultural sites that they routinely visit, she and others collect information on a great deal more parameters, including pH, dissolved oxygen, temperature, specific conductivity, salinity and fecal coliform bacteria. Nutrients, like phosphorus, are monitored as well.

In locations throughout the upper watershed, Beaulieu says that water managers with the tribe collect temperature and streamflow data along with gathering discrete samples for studying suspended sediments and Oxygen 18, which serves as an indicator of glacier melt’s contribution to flow. “We have started to really focus on climate change impacts to the upper watershed and its effects on water supply, sediment output and water temperature, which informs the tribe of ultimate impacts on aquatic habitat salmonid resiliency,” said Beaulieu.

Turbidity data are useful for understanding the timing and seasonality of sediment pulses that course through the upper watershed, she says, as well as how they could affect salmon at different stages in their lives.

These metrics are commonly gathered using a Hach 2100Q Portable Turbidity Meter, which serves largely as a spot-checking device when tribal managers are out sampling streams. In some areas, Beaulieu says that FTS DTS-12 Digital Turbidity Sensors get used to measure the parameter continuously.

And since tribal researchers have collected so much information over the years, the U.S. Geological Survey has asked for their help on a project there.

“We are teaming up with the U.S. Geological Survey on our sediment monitoring project in the upper watershed, as we have a very extensive dataset of sediment and turbidity in the Nooksack Watershed,” said Beaulieu. “Our next step is to use our baseline data to develop and calibrate a geospatial hydrology model that will incorporate climate change projections. The outcome of the model will help the Tribe to predict how sediment output might change in the future with more intense precipitation and less snow in the winter, and less precipitation but higher glacier melt in the summer.”

The detailed measurements taken so far have yielded some truly worthwhile results, showcasing differences that can be created by watershed composition.

“The summer of 2015 was anomalously warm with very little snowpack, so the glacier streams were full of fine sediment for a prolonged period of time during very low streamflows,” said Beaulieu. “So it has been interesting to compare the differences between glacial watersheds and rain- / snow-dominated watersheds that primarily see turbidity / suspended sediment spikes during flood events.”