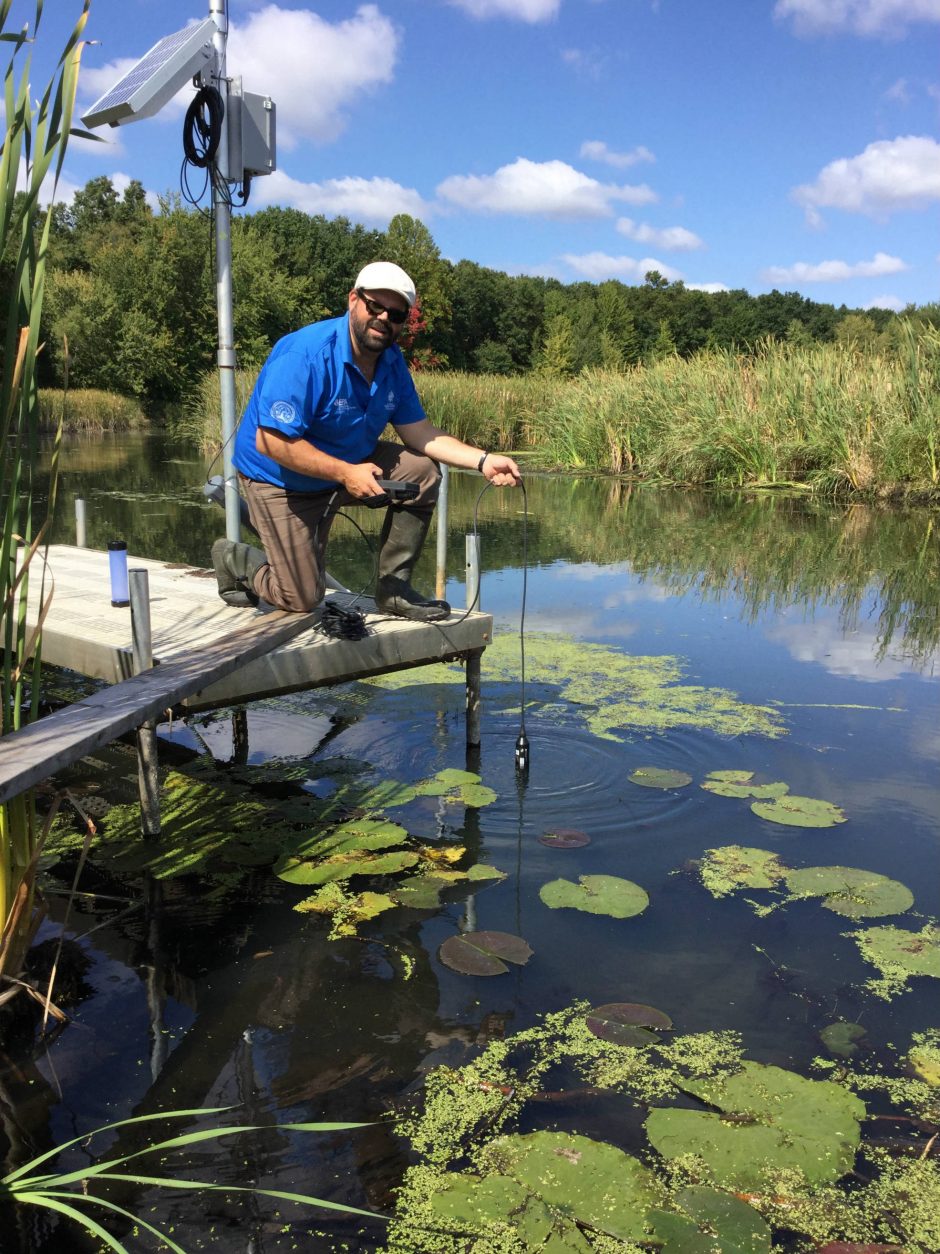 Eric Kerney has served as Senior Environmental Specialist for the Nottawaseppi Huron Band of Potawatomi since 2010. Formerly a water resource specialist, Kerney’s specialties include water quality monitoring and Geographic Information System (GIS) mapping. “The tribe was concerned about the impacts of runoff to our waterways, drinking water aquifers and wild rice,” he says.

When he first arrived, Kerney’s equipment consisted of a V2 6820 multi-parameter probe which couldn’t even connect to the computer. The setup was designed to assess the current conditions of water chemistry, E. coli, total Phosphorus and total Nitrogen. While the state of Michigan did monitoring on a five year rotating basis of the area, there was no one in the field observing impacts in the St. Joseph River Watershed year by year. Physical and chemical properties of the water were not being checked frequently, nor were pathogen levels.  The Pine Creek Reservation is in southwest Michigan, about 15 miles south of Battle Creek in Calhoun County. When issues arose with the existing equipment, the Water Program upgraded to a YSI ProDSS, which utilizes EcoWatch Software. The new unit was much smaller and easy to deploy in the field, simplified the calibration process and allowed a better digital interface.

More improvements were on the way. “We more recently acquired a Fondriest NexSens data logging system with a MAST wireless telemetry and a LIVE web data center. We also now have a Lufft WS601 Multi-Parameter Weather Sensor and an in situ Aqua Troll continuous water monitoring device,” he says. Weather data is gathered once or twice a month, and diurnal monitoring is also performed. At Pine Creek Reservation the dissolved oxygen (DO) level of the water has also been of interest. When the data coming in was only from spot checking, daily variations in temperature and oxygen levels went unnoticed. “Now that we have telemetric capability, our data is much better,” says Kerney. “I admit that installing the system required a bit of a learning curve. Now that we’ve got it up and running, however, it’s been great to have live data. Not only do I get a better picture of what is happening in the environment, it’s been helpful for engaging visitors and tribal members because they can look at the data for themselves. It’s easily accessible.”

Making use of his background in Environment Resources and Geography from Western Michigan University, Kerney has worked hard to incorporate mapping to visualize data and water quality trends.

“One of the key things I have introduced here are story maps.” Essentially, story maps use geography as an anchor for information. They tell the story of place, issue, trend or pattern placed into a geographic context. Interactive maps are combined with photos, text, illustrations, video and/or audio in ways that meant to be intuitive for the user.  The data from the NexSens system can be incorporated directly into the interface as well, and another map shows the most recent data collected with the ProDSS at each sampling station. In the context of Pine Creek Reservation, they provide tribal stories and information of special interest to the tribe. “Story Maps are becoming widely used tools by Tribal and other governments to communicate to their citizens,” says Kerney. “We are using UAV videos to highlight beautiful aerial views of ecological restoration projects, and the plentiful water resources of the Pine Creek Reservation.” The tribe currently functions with a small but experienced staff of five, and during summer months there may be as many as ten employees including seasonal workers.  There is also a Tribal Youth to Work Program, where high school students help gather data at the reservation one day a week. Usually one or two students participate. Tribal interns from both Michigan State University and the University of Michigan have also been hosted.

“Partnering with the Wild Rice Restoration Program has also become a mainstay of water monitoring activities.  While an essential part of Tribal Lifeways up through the 19th century, the collection, processing and consumption of mnomen (wild rice) was nearly lost in recent times.  The rice variety that grows near us (Zizania aquatica) is now a state threatened species, and the tribe has focused on understanding how this resource can once again grow on the reservation.  Being a plant that literally grows in 1-2 feet of water, the quality of our waters is interconnected with the health of wild rice.”

Currently NHBP has a partnership with Bowling Green State University to better discern the genetic differences in the wild rice populations throughout southwest Michigan, and determine how related these various populations may be. “One of the issues we are interested in is climate change and how it has affected the tribe, and will affect it in the future,” says Kerney. “Long term monitoring helps us understand climate trends. This in turn will help the tribe determine how lifeways will need to be adapted as climate changes over time.”

The tribe itself has undergone rapid change and growth in the past decade. More of the historic land base has been recovered, and tribal government employment has risen to over 200 in 2018. The tribe’s establishment of FireKeepers Casino Hotel in Battle Creek has also led to the employment of over 1,700   people. There are nearly 1,400 NHBP tribal members, and the tribal service area covers seven counties in west and central Michigan. After decades of organizing and legal battles, NHBP was re-recognized in 1995 by the federal government. After the designation, access to housing resources greatly improved for the tribe. Originally settled on around 120 acres, the tribe currently has over 1,000 acres.  In addition to the restoration and stewardship work conducted by the Environmental Department, the government has built a modern government campus on the reservation with 35 housing units, most LEED certified.

“Pine Creek Reservation has been the tribal homeland since 1840,” says Kerney. However, the Nottawaseppi Huron Band of the Potawatomi Tribe was forcibly removed to Kansas.   Some of the current Band’s founding members escaped during the trek, while others returned after completing the forced march. After achieving recognition, NHBP was able to receive federal assistance to begin rebuilding its government and recovering a nearly lost language and culture.  That was a turning point that lead to expansion of the tribe and its resources. “It was the spark that ignited a fire for the tribe,” says Kerney.

“The reservation is located primarily among rural farmland near the small Village of Athens, Michigan. The Pine Creek flows through the reservation amongst a remote marsh, and then flows into the Nottawa Creek.  Both lie within the larger St. Joseph River Basin, the most heavily farmed and irrigated watershed in Lake Michigan. Runoff from agricultural impacts is the primary concern to Tribal Waters,” says Kerney. While some positive management practices have been implemented, the tribe is monitoring levels of nutrients and E. coli in waterways. The tribe receives essential assistance from the U.S. Environmental Protection Agency for monitoring Tribal Waters and other core protection programs.  The tribe has received CWA 106 funding since 2010, and anticipate receiving a small amount of additional yearly funding through the CWA 319 Program. The water program has taken several years to mature, and this has culminated in the development of a Non-Point Source Assessment and Management Plan.  These documents outline specific practices for reducing runoff from all sources into the Pine and Nottawa Creek Watersheds. Also, the NHBP Government provides support for the Water and GIS programs, along with several other federal agencies. In 2010, all the tribal concerns about water quality were shown to be justified when the largest inland oil spill in U.S. history occurred in the Kalamazoo River area, when approximately a million gallons of oil were spilled. “The tribe was pulled into the Natural Resource Damage Assessment and Recovery (NRDAR) process, in a way we could not have anticipated.  This has brought the upper Kalamazoo River into our focus for wild rice restoration, and further recovery of ecosystem services. We anticipate future involvement in Restoration Projects and potential; establishment of long-term water monitoring stations in the watershed. In addition to the wild rice, some other notable species at Pine Creek Reservation are the threatened Eastern Box Turtle, sandhill cranes and the American Columbo, Frasera caroliniensis, a rare native plant. Diverse turtle and frog species also abound, as well as deer, turkey and fish.

Tradition gives the tribe a great connection to the land of Pine Creek. The seasons bring tribal happenings such as active sweat lodges, maple sugaring—the first sign of spring, and the wild ricing, which occurs at the end of summer. Each month has a moon named for traditional seasonal activities that occur during the time.  June, for example, is called the strawberry moon.

“It’s been an enlightening experience working with the tribe,” Kerney enthuses. “It’s been great to see the tribe reclaim its own sovereignty and be a small part of the work to protect and restore the environment at Pine Creek.”

“While NHBP cannot endorse Fondriest, we have found the YSI water quality probes to be an excellent tool in the Tribe’s journey into protection of its water resources,” adds John Rodwan, Environment Director at Nottawaseppi Huron Band of the Potawatomi.