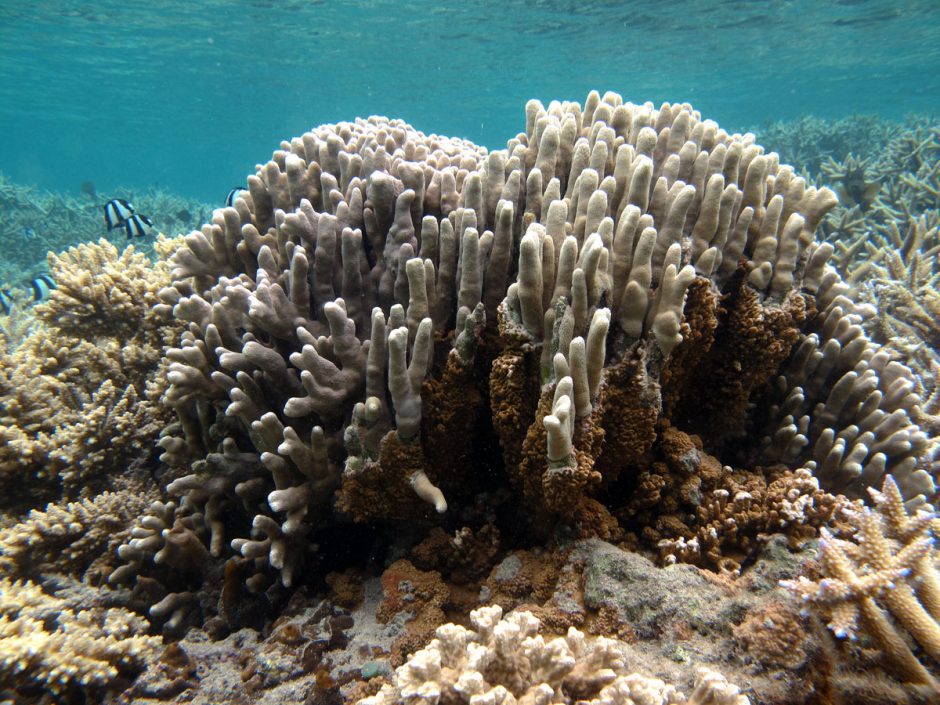 Ocean acidification is a hot topic in scientific circles; even for researchers, it is a deceptively complex issue. Recent work from a team of researchers, students, and alumni from the School of Ocean and Earth Science and Technology (SOEST) at the University of Hawai’i at Manoa reveals that human activities in the form of nutrient pollution can accelerate the harmful effects ocean acidification has on coral reefs.

Coral reefs protect coastal communities against some of the rigors of extreme weather and food insecurity. However, these benefits are mostly dependent upon the complex, fragile, three-dimensional structure of coral reefs. To ensure that coral reefs survive and thrive, bioeroding processes and organisms can’t outpace calcifying organisms, such as corals, which continue to rebuild the reef’s structures. When they do, the reef dies faster than it can be rebuilt.

The study’s lead author, Nyssa Silbiger, now an assistant professor at California State University, Northridge, is an alumna of the UH Manoa Hawai’i Institute of Marine Biology (HIMB) at SOEST. 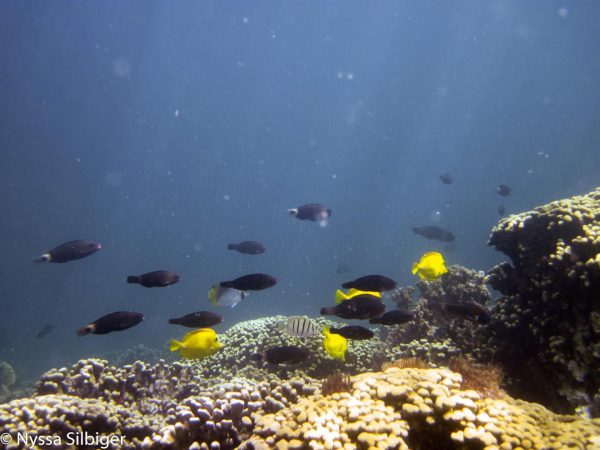 Image of a coral reef in Kaneohe Bay, Hawaii, where the experiment was conducted. (Credit: Nyssa Silbiger, https://www.eurekalert.org/multimedia/pub/172376.php?from=396271.)

Other research indicates that human activities are producing carbon dioxide (CO2) emissions that are driving processes such as ocean acidification. These processes are pushing coral reefs toward an overall loss, as the calcifying organisms are not able to keep pace with bioeroding organisms and processes, leading to declines in three-dimensional coral reef frameworks.

“We came to this conclusion by looking at the relationship between reef calcification rates (how fast calcifying organisms, such as corals, create the reef skeleton) and the amount dissolved compounds in the water that are the building blocks of coral reefs (calcium and carbonate),” details Dr. Silbiger. “Under low nutrient conditions, we saw exactly what we expect to see; the reefs grew faster when there more of these dissolved compounds in the water (we use a parameter called aragonite saturation state to measure this). However, when nutrients were high, this relationship completely broke down. The calcification rates were always low, and the corals were not able to capitalize on the important compounds that help them grow. Ocean acidification is driving down the concentrations of the dissolved compounds that are necessary for corals to build their skeletons, so together with nutrient pollution, it is like a one-two punch.”

The researchers collected samples of carbonate sand, coral, macroalgae, and rubble from the fringing reef of Coconut Island at the Hawai‘i Institute of Marine Biology at a predetermined collection site. The goal was to create mini-reefs under controlled conditions. 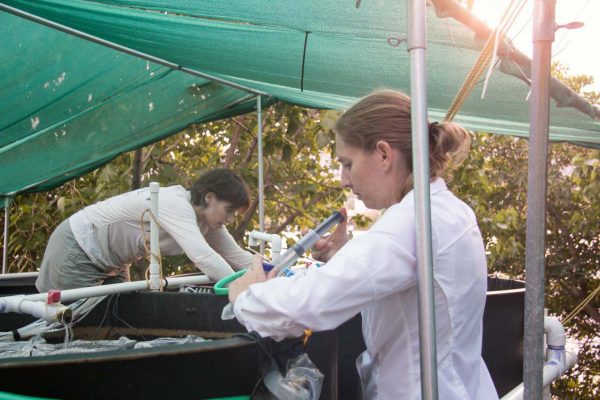 “We did this experiment in an outdoor aquarium facility so that the mini-reefs experienced natural light,” Dr. Silbiger describes. “In addition to nutrients, we also controlled the temperature and water flow to make sure that all of the aquariums were the same.”

They collected and prepared 36 clonal coral fragments or nubbins of two dominant coral species in the area. The nubbins were allowed to recover for two days, and then weighed and randomly assigned to mini-reefs.

“We collected the two most dominant coral species in Kaneohe Bay, where the experiment was conducted,” remarks Dr. Silbiger. “These two species were Montipora capitata and Porites compressa. We also collected a dominant seaweed, Gracilaria salicornia, dead coral skeleton that contains a community of bioeroding organisms (organisms that natural break down the coral skeleton), and sand.”

Highly fouled pieces algae were removed from the G. salicornia specimens prior to the experiment, which were then wet weighed and randomly assigned to mini-reefs. 36 sand cores of the same size, 7 centimeters in diameter by 2.5 centimeters deep, were collected, analyzed, and placed in the mini-reefs. 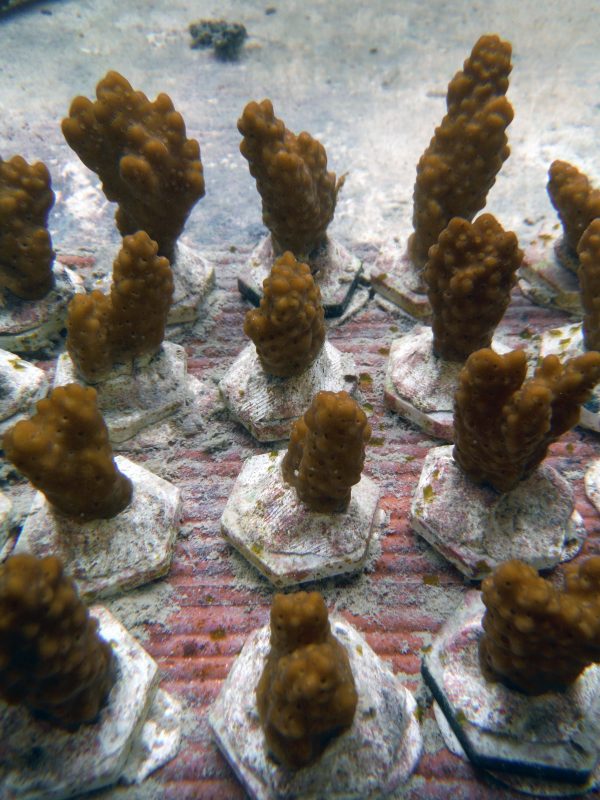 The team continuously added nitrate and phosphate to the mini-reefs. They then compared the mini-reefs to a control, mimicking natural systems, measuring calcification, dissolution, photosynthesis, and respiration—the four critical ecosystem functions of coral reef communities.

“Therefore, if nutrients are changing photosynthesis and respiration rates, they are also indirectly changing local pH,” explains Dr. Silbiger. “To put this into perspective, what we call ‘ocean acidification’ is the global change in ocean pH due to the absorption of CO2 from fossil fuels. As nutrient pollution can indirectly change pH, together with global ocean acidification they could have compounding effects on coral reefs.”

While the team confirmed the existing consensus that nutrients from fertilizers indirectly affect coral reefs by giving an edge to seaweeds and other organisms that can overwhelm reefs, the team also found that nutrient pollution can directly reduce the ability of corals to construct reefs.

“Calcification and dissolution describe how fast the skeletal framework of the reef is being built (calcification) or broken down (dissolution),” details Dr. Silbiger. “Both are natural processes, but in order for coral reefs to persist, the rate of calcification has to be higher than the rate of dissolution.” 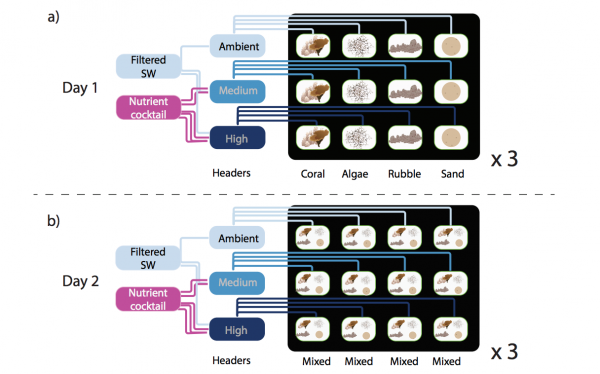 Researchers had already proven that ocean acidification increases rates of dissolution. The question that the current study answered in the affirmative was whether nutrient pollution could accelerate this process and make reefs more vulnerable.

“The framework of the reef provides essential ecosystem services that are important for human health and our economy,” asserts Dr. Silbiger. “For example, fish and other marine life that we eat use the highly complex skeletons that corals create as shelter. In addition, the coral reef framework has the capacity to absorb up to 90% of wind-driven wave energy from storms, protecting our coastline. If reefs lose their ‘function’ to calcify, they will also lose these important ‘services’ to protect our coastlines and provide food to local communities.”

In essence, the nutrient pollution from human activities is creating a compounded problem that in the end will affect human settlements in very serious ways.

“Our study shows that local stressors like nutrient pollution and global stressors like ocean acidification are interacting and accelerating the breakdown of coral reefs,” states Dr. Silbiger. “Our data indicate that both local management actions such as reducing nutrient runoff and seepage into groundwater, and global management actions such as reducing global CO2 emissions, are required to protect reefs from declining rapidly.” 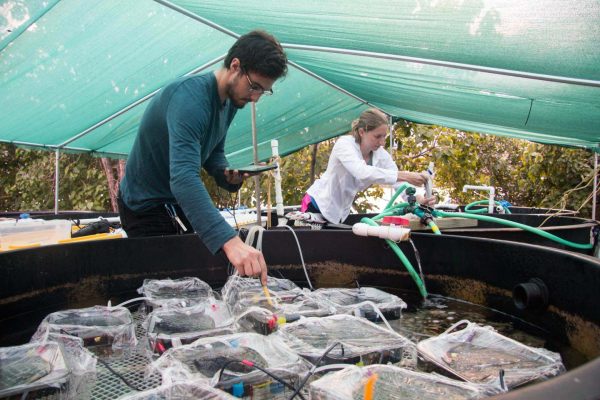 The research team will soon be working to determine how other coral reef denizens, such as fishes, impact these processes, the overall function of coral reef ecosystems, and their resilience.

“Coral reefs are complex networks and many reef processes affect coral reef resilience,” remarks Dr. Silbiger. “We are excited to incorporate higher trophic levels, which include fishes, into our future experiments.”

The researchers hope that these findings and their importance are not missed by those in a position to make management decisions.

“We hypothesized that nutrients could directly alter how reef organisms balance the chemical cycling of the reef, but the strength of the findings did surprise us,” adds Dr. Silbiger. “Nutrients from fertilizers are often thought to impact reefs indirectly. What this work emphasizes is that the nutrients directly compromise how corals and other reef organisms breathe and how their metabolism influences the chemistry of the reef, making the whole system more susceptible to the global threats reefs face from ocean acidification.”