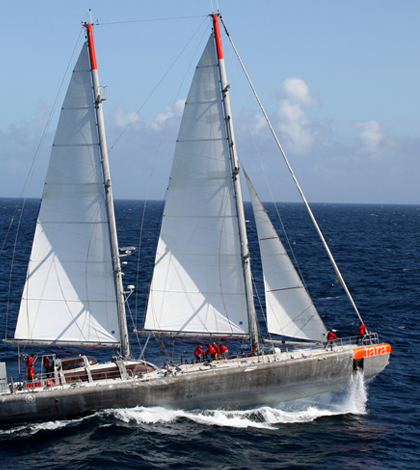 Humans put about 7 gigatons of carbon into the atmosphere each year. Of those 7 gigatons, the ocean takes up about 50 percent. But how the seas take up all this carbon, the ocean carbon flux, is not fully understood.

The role of phytoplankton, microscopic plants that drift in the ocean, is acknowledged to be significant in ocean carbon uptake but there are thousands of varieties of phytoplankton and all may not play the same role. In addition, bacteria and viruses have a role to play in ocean carbon fixation too, but sorting through the thousands, if not millions, of the ocean’s microbes and linking them to an ocean carbon sequestration function is daunting, to say the least.

Enter Matt Sullivan, assistant professor of microbiology and civil, environmental and geodetic engineering at Ohio State University. He is on an interdisciplinary team of faculty researchers, post-doctoral researchers and doctoral students that have taken on the seemingly impossible task of sifting through all of the ocean’s microbes and linking them to carbon fixation functionality using novel genetic and data module pairing techniques. As a result, ocean science has moved a few steps closer to solving the mystery of which microbes have the largest roles in fixating the ocean’s carbon.

“We asked ourselves why no one had done the type of investigation we had undertaken before, since it seemed like such an obvious and important thing to work on. It turned out the answer was: No one had done it before because it’s very, very hard to do,” Sullivan laughs.

The team would not have been able to obtain the enormous amount of data needed to understand which ocean microbes were key to carbon sequestration without the Tara Oceans Expedition, a multi-year, international data-gathering enterprise involving approximately 200 scientists from many different countries. Ports of call and visit dates in the Tara Oceans Expedition. (Credit: ENN.com)

The Tara project utilized a sailboat outfitted with the best equipment obtainable, sample-gathering nets and filters and multiple teams of scientists ready and willing to sail all over the world for 30-day stretches at a time. Harvesting samples from a hundred sites all over the Indian, Atlantic, Pacific and even a couple from the Southern Ocean surrounding Antarctica, the scientists hoped to obtain a fairly representative picture of what ocean microbes were present all over the world, their abundances and also their roles in ocean carbon flux and sequestration.

The Tara sailboat utilized a traditional CTD (conductivity, temperature, depth), which is a rosette of bottles, for capturing samples. Samples collect small ocean organisms, including small fish, phytoplankton, bacteria, archaea and viruses. Genetic material from all of these creatures was captured and stored on filters. The filters were then stored frozen in liquid nitrogen and/or -80 Celsius freezers with preservatives to maintain the integrity of the creatures’ DNA.

In order to obtain a sense of the relative abundances of the tiny ocean creatures collected through the Tara Project, Sullivan and other Ohio State researchers used a variety of sophisticated techniques. The most important imaging technique was the Video Plankton Recorder (VPR), a camera that replaces a bottle in the CTD and captures images of organisms while the other samples are being taken.

Another technique used was flow cytometry, where a laser strikes a carefully controlled stream of water. The laser responds to the fluorescence of particles, in this case cells, giving a cell count estimate in the water sitting in the laser’s path. In this way, a numeric estimate of the organisms can be obtained.

Microscopy techniques were used also, including dissecting microscopes, also known as stereoscopes, and Single Plane Illumination Microscopy (SPIM), all of which are used to examine organisms in 3D. The SPIM gives especially impressive resolution and a high number of scans of the multi-cellular or single-celled organisms. SPIM makes optical sectioning and multiple-view imaging of organisms possible.

In terms of analyzing the genetic information gleaned from thousands or perhaps millions of ocean creatures, Sullivan and his team turned to a metagenomics approach, wherein the genetic material of a whole community of captured organisms is analyzed at once. Illumina sequencers were used to obtain metagenomics data. Organismal abundances for bacteria, archaea and eukaryotes could be estimated using the conserved gene markers that 16S and 18S ribosomal genes encode. For the viruses, which lack such barcode genes, Sullivan and the team had to rely upon recent metagenomic analyses which assemble viral genomes and genome fragments from the fragmented datasets to identify populations which are approximately equivalent to species. Once they had these marker genes (for bacteria, archaea and eukaryotes) or populations (for viruses), organismal identities were made by using the Basic Local Alignment Search Tool against publically available databases.

“Unfortunately, the vast majority of the organisms in the oceans are novel, so were not yet known. For viruses, in particular, we had to create our own databases,” Sullivan notes.

Gene sequencing was used to create maps of ocean organisms. These maps gave some indication of which organisms were out there in the world’s oceans and their relative abundance. However, as massive a task as that one was, the truly difficult work had yet to be tackled.

“We had amassed an unprecedented dataset telling us which organisms were where in the world’s oceans and how abundant they were relative to each other, but we were left wondering which microbes were tied to the function we really cared about? Which ones were related to carbon flux in the ocean? That was the difficult question we needed to answer,” Sullivan recalls.

It was at this point that the larger Tara Oceans Consortium chose to develop and apply a novel approach which allowed them to move forward in their quest to understand which organisms were most closely tied with ocean carbon uptake and transport. They used organism maps and network analytics to determine which microbes occurred together and then asked which of these modules most correlated to the measured carbon transport throughout the oceans. To find which organisms in those modules best predicted ocean carbon flux, they used the “leave one out” method whereby one organism at a time was removed from the data input to see how it affected the model’s predictive ability. If the model became much worse after the organism’s removal, it was clear that the organism must have had a significant link to carbon flux. “It happened that I had done my doctoral work on Synechococcus, so the findings were pretty exciting to me,” says Sullivan. “Even though Prochlorococcus was considerably more abundant, our results showed that it was Synechococcus that best predicted carbon flux throughout the open oceans.”

Besides taking up large amounts of the ocean’s carbon, Synechococcus, commonly present in coastal waters, is also responsible for producing some 15 to 30 percent of the oxygen we breathe. “It’s a very important microorganism,” says Sullivan.

Sullivan and his team are some of only a handful of researchers who have looked into the role of viruses in ocean carbon flux, and they are the only team to discover that the associated viruses of Synechococcus have an outsized role in ocean carbon flux.

“Viruses are our specialty,” says Sullivan. “In addition to creating a global predictive model of carbon flux that includes viral contributions, there are other mysteries about viruses we are working to uncover. For example, 99 percent of the viral populations we saw we could not identify. They are just not known yet. In a separate study, we used mass spectrometry to look at purified viral proteins, but there’s a lot out there that must exist that we just don’t know about yet. We call all this unknown – ‘viral dark matter.’ With the Department of Energy’s Oak Ridge National Labs, we developed a proteomic assay to better identify viral structural proteins in complex communities with high-end mass spectrometry via the LTQ Orbitrap system.”

Sullivan and the OSU team are doing analyses that would have been impossible just a few years ago. “The technology has advanced so much just recently. We are computationally much more savvy than we used to be. We can get sequence data at scales we never dreamed of before,” Sullivan explains.

A couple emerging areas Sullivan hopes to get further into are microdroplets, which allow for separation of complex mixtures into a cell by cell separation and new sequencing technologies, such as those represented by 10X Genomics and Oxford Nanopore, which will allow for faster real-time data.

“I’m delighted that our research approach worked so well,” Sullivan enthuses. “Here we were dealing with these extremely complex communities of ocean organisms where virtually everything is unknown and yet we were able to make measurements of viruses that predict 89 percent of the variability we observed in ocean carbon flux. That Synechococcus plays such a big role is a twist we did not anticipate and changes the kind of research we will do moving forward. It’s all just so astonishing.”