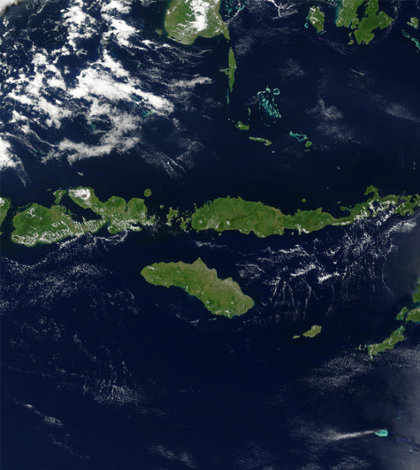 The depletion of ocean oxygen driven by human-caused climate change is expected to be evident over much of the world’s oceans by approximately 2030-2040, but in some areas researchers have already seen significant oxygen decreases.

“Human-induced climate change is driving oceanic deoxygenation with potentially serious impacts on marine ecosystems. However, because there is substantial natural variability in dissolved oxygen in the ocean, it is hard to know definitively when the influence of human-caused changes are evident,” says Matt Long, a scientist at the National Center for Atmospheric Research (NCAR), who has been investigating oxygen depletion in the ocean. He and his colleagues used a model to study future expected oxygen loss in the world’s oceans.

Concerning the modeling work, Long adds, “The year-to-year variations in oxygen form a sort of envelope to which ecosystems are naturally adapted. We used a fairly novel modeling framework to quantify when human-caused climate change causes ocean oxygen levels to clearly fall below this natural envelope of variability.”

Long’s approach used an Earth system model which is fully coupled. The model takes into account the dynamics of oxygen concentrations in the ocean over a three-dimensional space. The model simulates how oxygen concentrations vary as a result of atmospheric conditions, changing circulation and ocean biology. It provides a useful framework with which to study climate change.

A large ensemble is used in the model beginning in 1920. “Small perturbations in temperature are made in the model, and this makes sufficient noise for us to use that ensemble to evaluate the envelope of natural variability of oxygen concentration in the ocean,” Long explains. The model Long used for the work was run for the years 1920-2100 on the Yellowstone supercomputer, which is NCAR-operated. At least 24 simulations were performed.

The model was global, but the focus of analysis was on a particular density surface to eliminate variability. Density surfaces naturally move up and down in the water column.

Some locations are naturally more dynamic than others in terms of their oxygen concentration, and the model incorporates that dynamism. The data incorporated in the model focused on the North Pacific, a dynamic area where plenty of long-term observations are available.

“We looked at the oxygen concentration itself,” says Long. “We also looked at the natural perturbations of the climate. For every year of the model, we looked at the concentration at a specific location. If we were seeing a 2 standard deviation difference from what seemed to be typical, then we would suspect there was a human-caused oxygen depletion loss going on there.”

Next, trends in oxygen concentration were considered using a probability distribution. Trends were compared to transient runs. “We asked if it looked like we were experiencing trends outside what we would expect to be natural trends,” Long explains.

After that, spatial patterns were considered. Long looked at how the readings in the ocean varied.
“We tried to define what the patterns associated with natural modes of variability were,” he says, “and we compared these to the patterns driven by human-derived warming.”

Next, different regions were considered, including oxygen-minimal zones. “For example, equatorial zones tend to be naturally low in oxygen. It’s an area where denitrification occurs, though that may change,” says Long.

Creatures in equatorial ocean habitats may be hurt in the future as oxygen values get lower, since they will be living in a fragmented habitat that is partly viable and partly non-viable, due to the likely increase in the number or size of ocean dead zones as oxygen decreases.

“California’s West Coast is likely to see some huge effects from lower oxygen levels in the ocean,” Long mentions. “We are already seeing intermittent hypoxic zones there.” Ocean dead zones can occur because of low oxygen or deficiencies in other nutrients. Some of these factors are natural while some are caused by humans. “We see deoxygenation happening along with other processes, such as ocean acidification and increased metabolic demands on organisms due to global warming,” he explains.

While oxygen concentrations naturally vary in the ocean, the human-driven warming over time causes levels that fall out of the normal range. These deviations are made clear by the model.

“In looking at the results, we weren’t focused on an absolute change, but rather a change relative to the typical spread,” says Long. “We wanted to quantify when you would be able to detect human change as opposed to natural change.”

Results suggested that significant decreases in oxygen concentrations have already occurred in the southern Indian Ocean and in the eastern Pacific and Atlantic Oceans. East Africa, Australia and southeast Asia, on the other hand, had yet to show significant differences in oxygen levels as late as 2100.

Long continues to work on the model at NCAR. He mentions that a weakness of his modeling studies is that some areas of the ocean may not be represented as well as others due to lack of observational data.

“We have hardly any data for some areas,” he admits. “It would be great if we could get some ARGO passive floats in some areas. They can give vertical profile data every two weeks or so. At the moment, less than five percent of the floats of that kind have oxygen probes, but it would really help if all of them did.”

While satellites can be useful for gathering many kinds of data, Long says they don’t do very well at getting oxygen measurements that are useful for modeling purposes.

He can get chlorophyll content, however. “It would be good to get biomass distribution data and physiological adaptation information and add that in also,” he says.

Long says many people were surprised that oxygen levels were getting measurably lower all over the globe as his research shows.

“We really need to mitigate climate change. We really do,” he emphasizes.