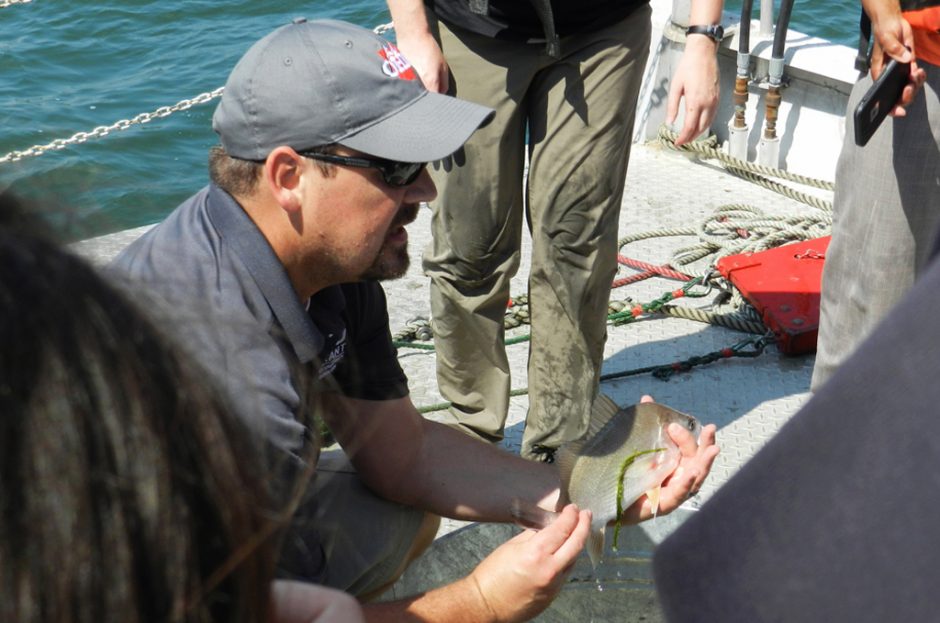 Chris Winslow is the interim director of the Ohio Sea Grant. The Environmental Monitor recently caught up with him during a meeting of science reporters at Ohio State University’s Stone Lab on Lake Erie’s Gibraltar Island. Winslow told us about some of the projects going on under Ohio Sea Grant to help address harmful algal blooms (HABs) in the lake.

Environmental Monitor: Can you tell us a little about your work on the Field to Faucet Initiative?

Chris Winslow: Field to faucet is all Ohio State (OSU) awardees because it’s a College of Food, Agricultural and Environmental Sciences initiative. These are OSU projects, but the co-PIs are coming from Heidelberg University, University of Toledo, Bowling Green State University, but you’ll see the state — there’s (Ohio) EPA, Department of Natural Resources, the U.S. Geological Survey is in on some of these projects. So it is a very collaborative effort going forward.

EM: We heard there’s a project looking to extract nutrients directly from manure — How does that work?

CW: So basically there’s a series of centrifuges and hydrated lime on the back of a semi truck and they are pulling through filtered water. That comes out the back at about 1 milligram per liter. So you can irrigate your fields in that area and not have to worry about increasing your soil phosphorus and runoff. The cool thing about this is that the separated lime’s solid, so after this whole coagulation process goes through, the lime solids are held in what we’re calling lime or phosphorus cakes. These are the concentrated phosphorus that’s pulled out of the process. And those cakes now no longer have the volume of water associated with them, so they can be shipped out of that distressed watershed and sold to other farmers to use as fertilizer.

Right now, it’s running. They’re using the Quasar digesters and they’re not actually running manure through this yet but they’re testing it on what actually comes out of these digesters, removing the phosphorus and nitrogen from that material. They will then actually move it to a farm and do it with that material. … With the manure, it’s an unproven concept. They’re going to do it with manure and see if there’s anything that needs to be tweaked or changed. So that’s what will happen over the next five to six months is to do manure trials instead of digester material. EM: How is your team working to leverage smartphone technology to help farmers?

CW: We’re making an app that farmers can use when they’re on their fields. So they can use this app to record what is my crop? Am I doing corn, soybean or wheat? And what kind of tillage did I do on my acreage? How much fertilizer did I add this year? What was the rainfall this year? Or how much did I irrigate? So they can type all of this into the app while they’re on their field doing the work so they can track it. There is currently an app out by the Ohio Farm Bureau Federation, but that app is different. The Farm Bureau app is to keep farmers in compliance with 4Rs. Two separate apps, but the one that’s being developed by John Fulton (associate professor in OSU’s Department of Food, Agricultural and Environmental Science), basically it’s this idea of nutrient stewardship. So letting farmers know, when I do this with this amount of crop rotation and fertilizer application, it resulted in this yield. So really giving tools to farmers so they can kind of know how their fields are producing.

EM: What about drones?

CW: There are drones now that are fitted with cameras that are actually looking at the spectra coming back off the water source, being able to look at what organisms are living in there. One of our investigators has a drone that has been using optical images to look at those wave spectrums. It has actually been outfitted with a water collection device, so it can actually go out to the stream, collect a water sample and then take a photograph of where that water was taken from and bring it back to the researcher. So the researcher can actually analyze the organisms in the water, like which zooplankton or chlorophyll or cyanobacteria are in there, and correlate that with the wavelengths that are coming back off the water.

This is not new stuff as far as the wavelengths go. This is what the satellites have been doing for Dr. (Rick) Stumpf (scientist at the National Oceanic and Atmospheric Administration) for the HABs forecasts. But the problems with the satellites, if you have a cloudy day or the satellite’s not passing over when you wanted it to, you’re missing data. So this allows you to do it at very specific locations. This also allows us to get inland because the satellites have a certain grid size, like 1-kilometer resolution. These have much finer resolution, you can take these to smaller inland lakes. EM: There is also talk of developing a sensor that can measure cyanobacteria toxins in real time. Can you give us an update on that?

CW: As you guys know, right now the ELISA (enzyme-linked immunosorbent assay) kit that wastewater treatment plants are using takes anywhere from four to six hours to get results back. Well if you’re a water treatment plant, that water is already in your plant and going through. So in many of the water treatment plants, when they see cyanobacteria in the water, they have to assume it’s producing toxins and they have to assume it’s producing at pretty high levels. They treat worst-case scenarios because they don’t know what the concentration is and they won’t know for four or five hours. So what Wu Lu (professor in the Department of Electrical and Chemical Engineering at OSU) is doing will give them the time so they can say, “Hey, cyanobacteria is in the water but this time it’s not producing toxins, we don’t have to ramp up our efforts.” We can also see that the toxins are there, but at this part per million, so they don’t have to treat as much. It’s going to help the wastewater treatment plants treat that waste in a very targeted way.

EM: Phosphorus fingerprinting, or pinpointing in water samples exactly where the nutrient originates, is an exciting possibility that some of your colleagues are working on. Are we getting close to it becoming a reality?

CW: A sample that you take from a pile of chicken waste might have 1,500 unique molecules in it, or compounds. Of those 1,500, maybe 200 have a phosphorus in it. Of those 200, how many would be also found in chicken, cow, pig? Of those, how many of those are unique to chicken? So we’re already at that stage. We have that suite of characters for wastewater treatment plants, pigs, chickens, cows, that are unique phosphorus molecules for each one of those. Now we think we will have the capability of doing that.