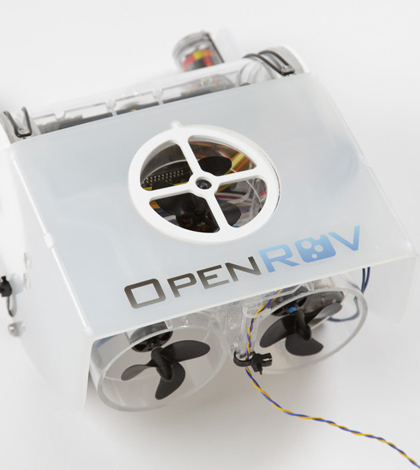 Remotely operated vehicles are often used to explore hard-to-reach places underwater, but that doesn’t mean the cost of an ROV is out of reach for would-be explorers.

OpenROV is an open source project making ROVs available to almost anyone. “The intention of the project is to create an ROV that is low cost and easy enough for anyone to build, but that is still capable of doing relevant scientific work and exploration,” said OpenROV founder Eric Stackpole in the OpenROV KickStarter video.

OpenROVs come in user-assembled kits that cost less than $1,000. The body is made from laser cut acrylic. All the components from the propulsion system to the internal electronics are off-the-shelf.  “None of it was designed to go underwater,” said OpenROV co-founder David Lang in an interview. “We just adapted it and made it work.”

The project started when Stackpole, a NASA engineer working on small satellites, wanted to explore an underwater cave in Northern California. Hall City Cave is rumored to have gold stashed somewhere in its depths, hidden by Native Americans who were supposedly slain for stealing the gold.

Stackpole, Lang and a few other enthusiasts developed a prototype to explore the cave. The project gained a following as the team shared their progress online.

They started a KickStarter campaign to fund the project with the hope of creating a product many people could use. They asked for $20,000 over the course of a month in the summer of 2012.  They promised donors of $775 or more an OpenROV kit so they too could explore.  By the end of the donation period, the team had $111,622 in donations.

With new-found capital, the team continued to move forward. More programmers, engineers and enthusiasts came onboard to donate their expertise to the ROV’s operating system code and system design. “It’s moving quickly,” said Lang. “And the best part about it is it’s really adaptable.”

The OpenROV uses an Arduino Microprocessor, which has a large following in the world of open sourced tech development.  It’s commanded by a tiny Beagle Bone Black Linux computer, which costs around $45.

Lang said programmers knew users would like to add their own computing functionality to the ROV. They left plenty of space on the Beagle Bone for users to program functions and add in hardware.

To pilot the ROV, users connect it to their computer via an Ethernet port. A web browser interfaces with the ROV via its IP address. The keyboard controls movement. A web camera allows users to navigate through the deep.

OpenROV was designed with payload space for sensors, samplers or additional attachments. Between the ROV’s battery compartments, four threaded rods can be attached to hang sensors. Dedicated users on the OpenROV website constantly share developments in wikis and a web forum. Discussions range from technical to outright fun.  One can pick up a discussion on combating invasive lionfish or critique the latest code update for the communications system.

People have been using OpenROVs for everything from scientific instruments to toys.  Its affordability allows researchers in impoverished nations to conduct habitat surveys and do underwater exploration.

The ROV is rated to dive up to 100 meters, though so far it has only been tested as deep as 20 meters. OpenROV is 30 centimeters long, 20 centimeters wide and 15 centimeters tall. It weighs approximately 2.5 kilograms and is neutrally buoyant once submerged.

It can move through the water at approximately 1 meter per second. Battery life lasts about an hour and a half.

The ROV typically takes a few days to assemble and is exploring soon after, though like any good project there’s always some tinkering that has to be done.

Lang said now the OpenROV team is working to keep up supply and watching for user developments. “At this point, we’re really just watching the community,” Lang said. “We’re going to watch and to learn and to listen because the users are the best indicators of what this technology will best be used for.”