ORSANCO Works To Track The Complexities Of 981-Mile Ohio River 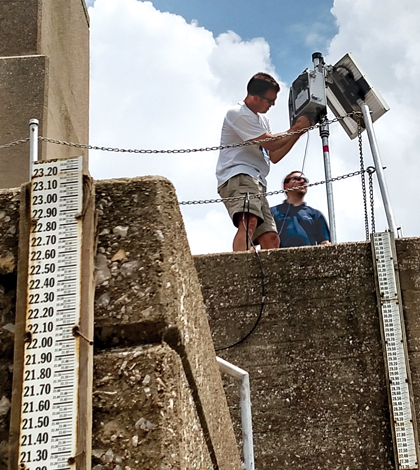 Installation of a NexSens 3100-iSIC Data Logger at Newburgh Locks and Dam on the Ohio River. (Credit: Greg Youngstrom, ORSANCO)

The most recent U.S. EPA Toxic Release Inventory National Analysis, published in 2013, names the Ohio River as the most polluted river in the United States. It reports that twenty-three million pounds of chemicals were discharged into the river during that year. The discharge number is big, but easy to explain: The Ohio River is a working river, charged with transporting barges around the clock; turning generators at hydropower installations along its length; and absorbing inputs and runoff from agriculture, urban areas, wastewater treatment plants and industry.

Another way to put it in context is to consider the volume of the Ohio River. At some twenty-five trillion gallons, its chemical content is highly diluted, meaning it is safe for aquatic life, recreation and as a source for drinking water. Making sure that the river maintains those beneficial uses is the work of the Ohio River Valley Water Sanitation Commission, or ORSANCO, an interstate agency representing eight states near the waterway.

“We have a very efficient staff and work really hard to locate the monitors we use and to complete the processes for tracking the complexities of a 981-mile river,” said Richard Harrison, executive director at ORSANCO. “We do a very good job of doing that with close coordination of eight states and federal partners.”

As part of that monitoring work, the agency has many initiatives to keep an eye on a large number of things in the river, including nutrients, dissolved oxygen levels, metals, bacteria and other water quality parameters.

The Toxic Release Inventory identified nitrates as the biggest contributor to the Ohio River’s pollution — 92 percent of the discharge total. But that is just one of the pollutants that ORSANCO monitors as part of a bimonthly program that involves sampling at 15 dams along the river and another 14 sites along its major tributaries. The manual sampling effort involves going out with sampling bottles, gathering discrete water samples and then sending them to labs for analysis.

“We have routine monitoring as part of a program where we sample every other month,” said Greg Youngstrom, an environmental specialist with the agency. “We track 31 different parameters. Those include metals, major nutrients and ions, like chlorides.” Chlorides are indicative of road salt runoff. Installation of a NexSens 3100-iSIC Data Logger at Newburgh Locks and Dam on the Ohio River. (Credit: Greg Youngstrom, ORSANCO)

The nutrient monitoring is increasingly important, as the U.S. EPA has asked states to develop limits for nutrient concentrations in lakes and rivers nationwide. The requirements cover inorganic and organic sources of nitrates and phosphorus. Much of the reason for the increased focus is the effects that high nutrient levels can have on the ecosystems of waterways.

“When you increase nutrients, you increase algae, which causes an algal problem that affects macroinvertebrates,” said Youngstrom. To complement exploring the issue even further, the agency has dissolved oxygen data loggers at 60 sites along the river, with each reporting measurements every 30 minutes. If levels come back anywhere below 5 milligrams per liter, agency officials go out and inspect the river’s pool where they were taken. “That information will also be used in developing the numeric nutrient criteria.”

The agency conducts some monitoring on an as-needed basis. During the contact recreation season, from April through October each year, ORSANCO tracks bacteria levels at six sites near major urban areas once a week to make sure conditions are safe for swimmers. Environmental specialists with the agency collect water samples near Cincinnati that are later analyzed for fecal coliform and E. coli bacteria. The agency’s partners near Pittsburgh, as well as some wastewater treatment plants, send them data as well.

ORSANCO is also adding new stations equipped with remote telemetry capabilities, including a NexSens 3100-iSIC Data Logger that was recently deployed at the Newburgh Locks and Dam with a YSI 6600 V2-2 Multi-Parameter Water Quality Sonde and a Turner Cyclops CDOM sensor. It joins another 3100-iSIC the agency has at Smithland Locks and Dam.

“Right now, we have three stations on the Ohio equipped with data sondes that measure pH, temperature, conductivity, turbidity and chlorophyll-a,” said Youngstrom. The third is located at John T. Myers Locks and Dam near Uniontown, Kentucky. “We’re starting to get more use of telemetry systems.”

Data from the Turner CDOM sensor are aiding another project looking at mercury in the Ohio River. Since CDOM measurements are a good surrogate for methylation — the process that makes mercury bioavailable to organisms in the river — ORSANCO scientists can use them to model where fish and other aquatic animals are more likely to absorb mercury. The work depends on levels of mercury found through the routine, discrete sampling efforts.

“By collecting mercury samples from one day to the next, we are building a relationship between the CDOM and mercury levels,” said Youngstrom.

Moving forward, the agency will continue its work tracking and maintaining the health of the Ohio River, and may even add a few new monitoring initiatives. Coming out of its June commission meeting, one of three annually, ORSANCO officials say they have lots of things in the works, including new dissolved oxygen monitors, remote telemetry stations and efforts to support setting nutrient limits requested by the EPA.