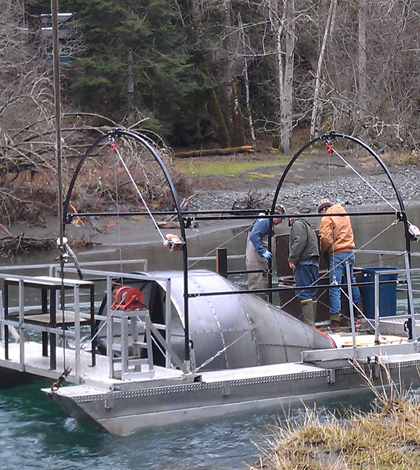 Every year, biologists with the Pacific States Marine Fisheries Commission work to promote the usefulness of fisheries near the Pacific Ocean, whether they contain marine life, freshwater fish or even shellfish. Of annual interest to them is the migrations of anadromous fish like salmon and trout.

To study the migrations, they use a variety of tools, including rotary screw traps, which are giant cones five to eight feet across that have rotating blades to funnel fish into live boxes. The traps are anchored at fixed points within streams and allow researchers to gather plenty of fish for study.

But collecting fish is just the first step in the annual work. Researchers are interested in relationships between fish health and water quality, and often study parameters that affect fish, like dissolved oxygen or turbidity. One device that they use alongside the rotary screw traps each year is a Hach 2100Q Portable Turbidity Meter.

“(We) measure turbidity in the field and lab for river samples during our rotary screw trap season,” said Alana Imrie, a fisheries biologist with the PSMFC. “We (also) had a gravel augmentation project last year in the river and we had to take continuous samples downstream in order to stay within permit turbidity allowances.”

Turbidity is important to track because it can impact the levels of dissolved oxygen available to fish. If it goes too high, water clarity can also be affected, lowering the amount of light available to aquatic plants.

In addition to those concerns, technicians with the PSMFC use the turbidity meter to find relationships between turbidity levels and fish passage.

“We use the data to see if there is any correlation with fish passage and turbidity for the rotary screw traps,” said Imrie. “The gravel project results were reported after sample reading done in the field to (the) project lead to make sure we didn’t have any turbidity violations while in-river work was being done.”