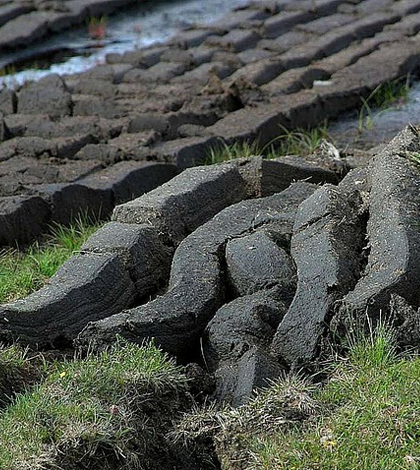 Peat bogs are easy to miss. They sit low in landscapes and are typically covered by mosses. But just below the vibrant green are long-buried plants and organisms that play important roles in supporting growing vegetation above. They also represent large quantities of sequestered carbon that would otherwise make its way into the atmosphere.

Officials with the U.S. Forest Service recognize the importance of these systems and have sponsored further study into their dynamics. Scientists at Michigan Technological University are leading the investigation, using structures called peatcosms, essentially boxed-up mini peat bogs, to do it. The results of their work are proving the importance of vegetation in keeping carbon underground and will be useful in climate models that include peat bogs in their calculations.

“The peatcosms are largely for convenience and control instead of doing it out in the field,” said Evan Kane, a research scientist with the U.S. Forest Service and research assistant professor at Michigan Tech. “You can do a lot of variations quicker that you would have to wait much longer for naturally.”

The peatcosms, also called mesocosms, have been instrumented with a lot of monitoring technology, including optical dissolved oxygen probes that use rhizotron tubes; platinum sensing electrodes that measure oxidation-reduction potential; thermistors to track temperature; and pressure transducers that measure water level. Carbon dioxide and methane production from the peatcosms is measured with infrared gas analyzers equipped with flame-ion detectors, which Kane says are the same ones used by the landfill industry to monitor their fills. Evan Kane, left, works on a peatcosm with one of his fellow researchers. (Credit: Michigan Technological University)

All of those instruments wire into a centralized data logger that makes tracking peat bog dynamics easy for researchers.

“It’s nice because we can sit there with a cup of coffee in our hands and see what’s going on in all 24 mesocosms,” said Kane. But despite the luxury, there’s still some pretty serious science going on.

Kane and others have found that the water table in a peat bog has a sizable effect on its carbon emissions, because the amount of water available affects vegetation growth. They singled out sedges and shrubs, two common bog plants, to see what effects water variation had on both.

“It wasn’t surprising that the water table has an effect. What was surprising was how strong the sedge effects were,” said Kane. They found that sedges, grass-like plants that grow in or near water, pump measurable concentrations of oxygen down into peat. That led them to look closer at sedge abundance. “People often find increased methane where sedges are growing but if you can control sedges, they actually have an oxidizing effect which decreases methane.”

Findings like those will help intrigue other scientists into looking into the effects of vegetation more and focusing less on those of the water table, says Kane.

“Some only look at the water table,” said Kane. “But you can map vegetation too, and that will give you more power in predicting trace gas production.”

For dried-up peat bogs, investigators found that they are more likely to favor shrubs. These plants are highly effective at storing carbon and release less carbon dioxide and methane than sedges. Shrubs also take up less in nutrients from peat below, which could mean they’re better to have around in drought conditions. In fact, scientists say, dry conditions could actually lead to more carbon uptake in peat bog systems.