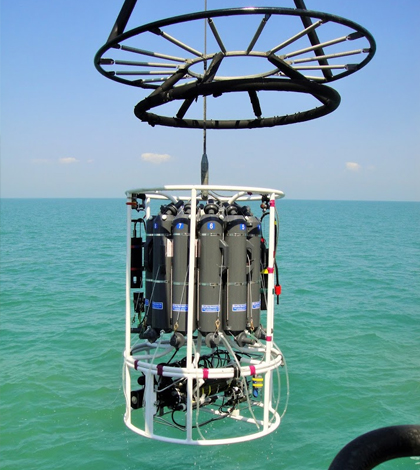 A rosette of niskin bottles and other scientific instruments to sample Lake Erie’s water in a profile. (Credit: University of Toledo)

What happens to algae-feeding phosphorus in Lake Erie that isn’t used up by microbes but instead stays in the sediments? Does it have impacts on the algal blooms that hit the lake the following year? These questions have intrigued Great Lakes researchers for some time and have recently been answered thanks to an investigation by a consortium of Lake Erie researchers.

Findings of the work were shared during an Ohio Sea Grant webinar on July 7. Numerous updates were given to the media by Lake Erie scientists, covering tributary nutrient monitoring, the Lake Erie algal bloom forecast for 2016 and predicted climate change’s impacts on the lake’s recurring blooms. A recording of the briefing is posted on the Sea Grant’s YouTube account.

Tom Bridgeman, associate professor at U. of Toledo’s Lake Erie Center, discussed the study in which he and numerous collaborators dissected the issue of sedimentary phosphorus over a two-year period. A large goal at the outset of the effort was to pinpoint just how much that phosphorus retained by sediments was contributing to blooms in the following year. A high figure would mean management strategies needed an update.

The U.S. and Canada have agreed to reduce the amount of phosphorus going into the lake by 40 percent in a bid to minimize algal blooms and their detrimental effects. The next question scientists sought to answer from that point was, even if that 40 percent reduction can be achieved, will algal blooms go down as hoped? And, much farther down the road, researchers looked to gauge whether climate change would increase or decrease phosphorus loading.

In 2012, Bridgeman noted, there was a very dry year that resulted in a small algal bloom in Lake Erie. This followed the massive 2011 bloom, helping to inform a guess that the sedimentary contribution to blooms was pretty low. If there had been a lot of carry over, then that 2012 bloom would have been much larger.

“Maybe that small bloom that we got in 2012 was due to a little bit of hangover. Or it was due to waste from the plants or dredging or other things, but that clue shows us how internal cycling of sediments probably is not going to be such a big problem,” said Bridgeman. “But we don’t know that. That’s just kind of looking at that and it’s probably what we’d think, but we really need to measure that.”

To tackle the issues, he and others involved needed updated sediment data from western Lake Erie because those available at the outset were about 30 years old. Sites throughout the area were sampled to gather sediment cores, including some that were also surveyed with the help of plexiglass bottom chambers. These were placed by scuba divers who dived to them to gather water samples over the course of several days.

One issue that researchers encountered in the effort was the fact that there are many different methods for assessing phosphorus flux from sediments. To get around that, they approached testing it with as many as they could. Scientists used aerobic and anaerobic incubations, phosphorus electrodes and pore water expression, among others.

“We wanted to do it a lot of different ways to see if we could get a consensus of methods, whether they agree … We tried all of these different methods,” said Bridgeman. “The bottom line is that they all agree. Whatever method that we used to measure phosphorus, how phosphorus was coming up off the bottom, pretty much gave us the same answer.” Researchers obtain a sediment core from the floor of Lake Erie. (Credit: University of Toledo)

Which was that around 1.4 milligrams of phosphorus per square meter each day comes off the sediments in the western basin. Over the course of a summer, that equals about 3 to 7 percent of the targeted nutrient load coming in from tributaries.

“So really, that’s not very much. Under normal conditions when the lake is oxygenated, the sediments are oxygenated, we don’t think that there’s much phosphorus diffusing up from the bottom,” said Bridgeman. “The impact of external phosphorus load reductions will not be substantially delayed by internal recycling. That was our main conclusion there.”

As for what may happen in a future of predicted climate change, researchers used Soil and Water Assessment Tool (SWAT) models to forecast impacts. They considered four different scenarios ranging from mild to severe changes.

Under a mild scenario, researchers modeled that winter loading would go down, while spring loading stayed fairly typical and summer and fall loadings went down. In all scenarios, loads for summer and fall dropped.

“But if we get the most severe climate change scenario, we’re going to get a lot more winter loading and more spring loading,” said Bridgeman. “So the effect of climate change is going to depend on how severe it is. If we get moderate warming, it could actually be good for us. It could decrease Maumee River loads. But if we get extreme warming scenarios, then it’s going to increase Maumee phosphorus loads.”

Western basin loading simulations also proved that the 40-percent reduction target was a good one. These showed that reducing loads from its tributaries would decrease algal bloom biomass considerably from a baseline representing the 2014 bloom.

Top image: A rosette of niskin bottles and other scientific instruments to sample Lake Erie’s water in a profile. (Credit: University of Toledo)