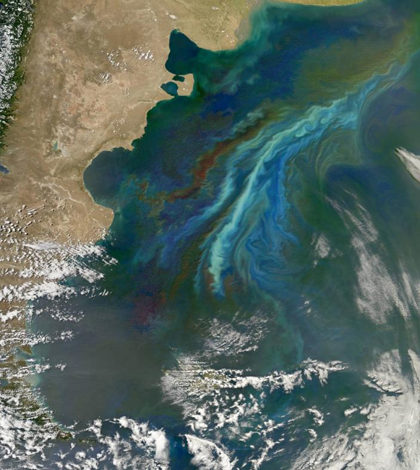 Every time a wave breaks, it sends tiny droplets of water up into the atmosphere where they attach to aerosols and form clouds. When those droplets are emitted from waters hosting massive marine plankton blooms, they may pick up extra organic matter.

Additional airborne particles can form through the condensation of gases emitted from the blooms, and their oxidation products.

These “seeded” cloud droplets can produce brighter clouds that more effectively reflect sunlight and keep the Earth cool, according to recent research from scientists at the University of Washington and the Pacific Northwest National Laboratory. A paper detailing the methodology and findings of the study is published online in Science Advances.

Co-authors Daniel Grosvenor and Daniel McCoy began the research in 2014 using data from the Moderate Resolution Imaging Spectroradiometer, or MODIS instrument, affixed to NASA’s Terra satellite. The UW researchers sought to study cloud properties and develop new treatments of satellite observations capable of quantifying the droplets comprising the tops of clouds above the Southern Ocean. But it wasn’t until the researchers met Susannah Burrows, a PNNL scientist, at a conference that they decided to explore the ocean’s biological impact on cloud formation.

“I’d been focusing a lot on developing quantifications about emissions of particles into the atmosphere from marine biota, especially particles that enter the atmosphere through seaspray and are enriched with organic matter from marine microorganisms,” said Burrows, who co-led the paper, together with UW researcher McCoy.

Burrows’ expertise gave Grosvenor and McCoy a different perspective into cloud formation and the significance of phytoplankton in the process. The researchers noticed that cloud-top droplet concentrations nearly doubled in the summer — right around the time that the largest plankton blooms tend to form. Waves send tiny droplets of water into the atmosphere where they attach to aerosols and form clouds.

Certain marine plankton species produce gases such dimethyl sulfide, which condense from aerosols after being chemically transformed in the atmosphere. Water particles need to affix themselves to an aerosol before becoming cloud-forming droplets, and the excess aerosols produced around plankton blooms provide greater opportunities for those particles to bond.

“If you have the same amount of water distributed over more cloud droplets, then each droplet will be smaller,” Burrows said. “If there are more particles available for cloud droplets to form on, then the clouds are brighter.

“It turns out that, in that situation, those clouds reflect more sunlight back into space, which has a cooling effect on the planet.”

It’s not just their gaseous emissions that plankton contribute to cloud formation. The various organic molecules that accumulate in and around a bloom form a film on bursting bubbles at the water surface, which can contribute to aerosol emissions, making clouds brighter and more reflective.

Burrows said more data from sources other than satellites will be necessary to learn more about specific aerosol types and distributions in the atmosphere, and the team hopes to improve their models to more accurately identify changes to cloud droplet concentrations. The findings could also have major implications for the way we understand climate change, and the ongoing interactions between the ocean and the atmosphere.

“We want to think about what the impacts are of climate change and changes to the Earth’s oceans on phytoplankton — and what that means for these aerosol sources,” Burrows said. “How is this effect going to respond to oceans getting warmer and more acidic, and changes to ocean circulation that are associated with melting sea ice?

“If that results in feedbacks on global climate sensitivity, that’s something that we’d really like to look at more closely.”