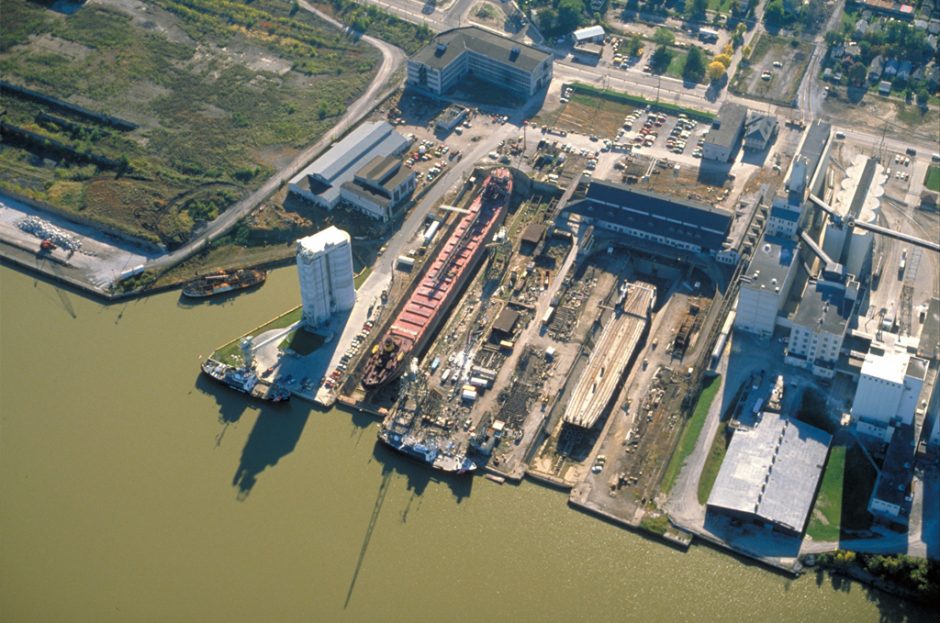 The Port of Toledo, Ohio, receives more sediment each year than any other harbor in the Great Lakes. That number is somewhere around 800,000 cubic yards of sediment in the most recent year, say officials with the Ohio Department of Natural Resources (DNR) who are working to find new ways to use the loads to benefit the people living nearby as well as Lake Erie overall.

Scudder Mackey, chief of the agency’s Office of Coastal Management, discussed some of the initiatives underway to reduce sediments in the port while also helping farmers seeking healthy crop yields during a recent meeting of Great Lakes reporters hosted by Ohio State University’s Stone Laboratory on Lake Erie’s Gibraltar Island. Mackey also shared some other projects that are on the agency’s docket in the years ahead.

Mackey says that the State of Ohio has done a lot to address nutrient and sediment loading in Lake Erie through the Healthy Lake Erie fund. The fund is run through the Ohio DNR but managed jointly with the Ohio Environmental Protection Agency.

Much of the monies went to Toledo due to its heavy sediment loads, and Mackey discussed some of the ways that the funding is being used.

“What are we doing to address some of the issues we have? Specifically nutrient and sediment loading,” said Mackey. “To address several issues, the HABs (harmful algal blooms) issue. And secondly, can we deal with the dredging issue along the coast of Ohio?”

By July 1, 2020, there will be no more open-lake sediment dumping, he says, per an Ohio law change. And so projects underway currently are helping to get things ready for managing where sediments can go in the future.

One is at Toledo’s Riverside Park, where Mackey and others have built a series of cells that are designed to mimic an agricultural field.

“Because one of the things we’re thinking. If you can pump this material back onto agricultural fields, the material that’s dredged out — you should understand that the material in Toledo is pretty much contaminant-free, it’s very clean sediment,” said Mackey. “You pump this back onto agricultural fields, you can probably grow crops on it and get better yields but we need to demonstrate that. That’s what this site is all about.”

The four cells sit on a site very near to an area set up to recycle Toledo’s yard waste, so there is a possible partnership there for developing soils. Four cells have been constructed, and were loaded with dredged sediment in early August.

“This is not a small area. The site is designed to receive, at least initially, 40,000 cubic yards of dredged material,” said Mackey. “We are, I think as of Tuesday (Aug. 16), we had 18,700 cubic yards pumped into cell 2 and they were just starting to pump into cell 4.” After the dredged slurry material goes in, it essentially sits there while the water is filtered out through underdrains, weirs and a fine mesh. The sediment remains.

In their states currently, sediments in the cells are still firming up, so there’s not much use for the final product yet. But give it some time, Mackey says, and the results could be quite positive.

“Next spring, we will do some tests and will look at compaction and geotechnical properties. But then we’re also going to go ahead and we’re actually going to do plantings in these cells for various types of crops and then we’ll see how they actually grow,” said Mackey. “And we’ll have a control area as well and over time what we want to do is to evaluate: Can we grow crops here? What are the yields that come off this? And how does that compare to the native soils that we have? And see if this is indeed as good or better (than typical agricultural land).”

The work at the cells will be done in the next few weeks, as dredging by the U.S. Army Corps of Engineers should be finished before Labor Day. The cells can capture quite a bit of the sediments from the Port of Toledo, perhaps around 10 percent, but Mackey cautions they will come nowhere close to capturing it all. Still, the demonstration project is a positive indicator of things that could come.

“It’s amazing,” said Mackey. “We actually have clear water coming out of these underdrains, and then it drains into this area that will collect the water and then we’ll do edge-of-field treatment before it goes back into (the lake).”

Mackey discusses other projects around the lake, including a bed load interceptor in the Cuyahoga River that is used to collect sand that comes off the river. It can remove up to 40,000 cubic yards of sand per year, he says, that then don’t need to be dredged out of the river. A confined disposal facility in Cleveland is doing something similar.

Mackey’s office also has some projects going on near Sandusky Bay, a highly turbid bay that sees high wave activity. What’s more, the bay is separated by bridges and other structures that can cause different conditions depending on which side of the structures you’re on. And so his team is looking at constructed wetlands that could trap sediments, including nitrogen and phosphorus.

“We’re talking about maybe some construction of islands out in the inner Sandusky Bay, because it’s only 5 to 8 feet deep. And you reduce wave energy, you break up the waves,” said Mackey. “Because the reason that Sandusky Bay is a really dark brown, other than the material coming out of the Sandusky River, is because these waves continually re-suspend sediment. So we’d be creating habitat there, but we’d also be breaking up the wave energy a bit.”

Doing that could also trap more sediment in the inner bay, which would significantly reduce the amount that has to be dredged in the turning basin. Long-term dredging costs could go down as well, he says, noting that as one of his office’s goals for 2025. There might also be some public-private partnerships come to bear for wetland creation near Sandusky Bay.

“The idea is to look at this and design a series of projects where the benefits from one feed into the next and into the next,” said Mackey. “It’s sort of like a giant stormwater treatment train but at the scale of Sandusky Bay. It just makes sense to try something like this.”