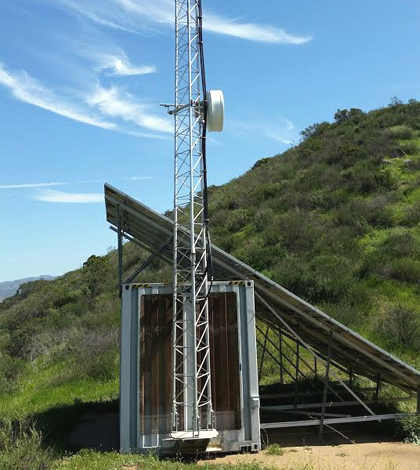 California wildfires in 2016 have been tough to contend with. And the state’s fight against blazes has been a recurring storyline in recent years. But perhaps a less-covered angle is the new ways through which government agencies and private interests have come together to protect infrastructure and life.

We have reported on the expanding camera networks throughout California and other western states that are helping first responders address potential fires more quickly. But spotting wildfires as they start is just one side of the coin. There is also an urgent need to predict their movements, and weather conditions are key in that effort. Wind is especially important, as its shifts can change the course of a blaze. Humidity and temperatures influence fire dynamics too.

One hotspot of weather monitoring is the Sunrise Powerlink, a vital transmission line across parts of San Diego County and Imperial County that ferries clean energy from solar and wind to surrounding cities. Along this line, which spans more than 100 miles, there are nearly 200 multiparameter weather stations deployed.

The idea is simple: Keep the San Diego region safe from wildfires while also ensuring that energy transmission isn’t disrupted. A helicopter rests at one of the monitoring sites along the Sunrise Powerlink. (Credit: Mike Rimmer / Redhorse Corporation)

“(We use weather sensors) all around San Diego County, in particular along the Sunrise Powerlink,” said Mike Rimmer, director of Naval Programs at Redhorse Corporation, a consultancy offering environmental and engineering services. He has a few Vaisala WXT520 multiparameter weather sensors set up along the Powerlink. “We gather data (like) wind, humidity, temperature, etc. for monitoring local conditions in wildfire hazard areas.”

The sensors are used daily, Rimmer says, and data are tabulated by operators at the San Diego Gas & Electric (SDG&E) Company who monitor them with fire risk in mind.

“Data is shared in partnership with the firefighters and other first responders,” said Rimmer. “And used for predicting events that would affect the power distribution grid.”

The multiparameter weather sensors were installed along the Powerlink a few years ago, but quickly gathered critical measurements. Rimmer says it was no time at all that data were being used in the fight against wildfires.

A July 2016 release from SDG&E spells out how the action can ramp up in a moment’s notice. Once officials realized how quickly a brushfire near Barona, Calif. was likely to spread, they mobilized a heli-tanker that dropped more than 14,000 gallons of water on the growing blaze within less than two hours.