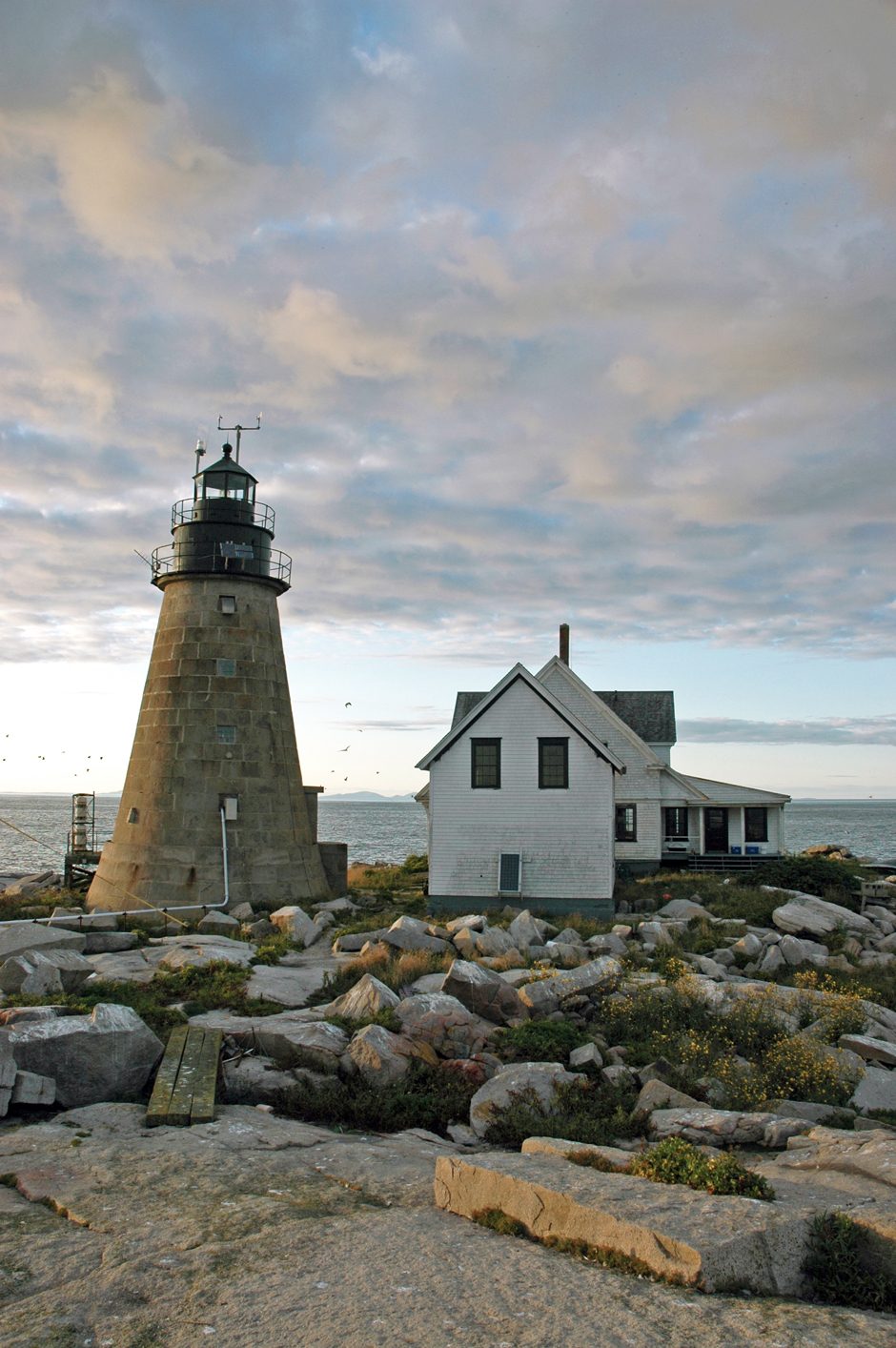 Owned by the College of the Atlantic, the Mount Desert Rock Marine Field Station, a member of the Organization of Biological Field Stations (OBFS), is a treeless island with a light tower and buildings that were once inhabited by lighthouse keepers and their families in the 19th century. The island is now the home of the Edward McCormick Blair Marine Research Station, and its surrounding waters are home to humpback whales, fin whales, northern right whales, common dolphins and white-sided dolphins. In summer, College of the Atlantic students can spend the summer on the island, with only one boat coming out to the island per week.

“It’s physically, mentally and socially challenging to spend extended time on the island,” says Dr. Sean Todd, College of the Atlantic’s Steve K. Katona Chair in Marine Science and Director of Allied Whale in Bar Harbor, Maine. Todd has been the Chair for 15 years and has worked in the Gulf of Maine for 20 years. “Not only is the island isolated, it can get intense weather. In 2009, for example, Hurricane Bill took out our boathouse and the first floor of a building,” he mentions. While the college owns the island and its buildings, the Coast Guard owns the Aids To Navigation mounted on the light tower. Facility maintenance can be challenging due to harsh island conditions and extreme weather events.

No stranger to harsh environments, Todd works in Antarctica as well. Some of his students have also been placed in research positions in Antarctica. Some have prepared for the unrelenting conditions at the world’s southernmost continent by doing research at Mount Desert Rock. 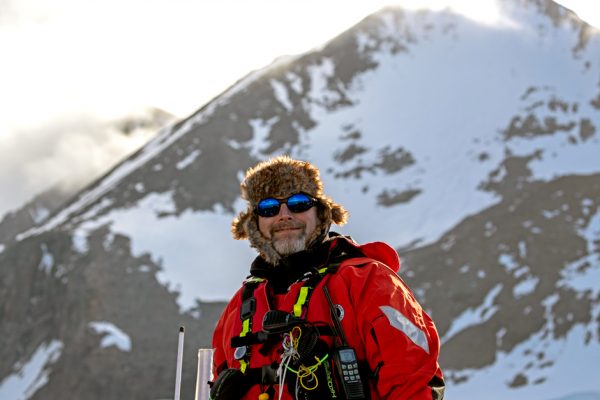 Both undergraduate and graduate students spend the summer at Mount Desert Rock, usually six to eight students at a time for a ten to twelve week period. High school students also visit the island, in week-long organized field classes. Students experience rough conditions and learn how to thrive in a savage environment, including learning how to keep the island running. Todd notes that many of the students learn how to maintain the facilities that include photovoltaics, diesel generators and power inverters. “We do ship in our own drinking water, though!” says Todd.

Physical monitoring is performed on an annual basis in summer and fall. Water quality monitoring has been performed since the 1970s and currently employ a Sea-Bird SB19v2 depth probe to gather data. Data is gathered at specific depths on parameters such as temperature, conductivity, salinity and density. Vertical stratification of the water is assessed and correlated with local productivity. 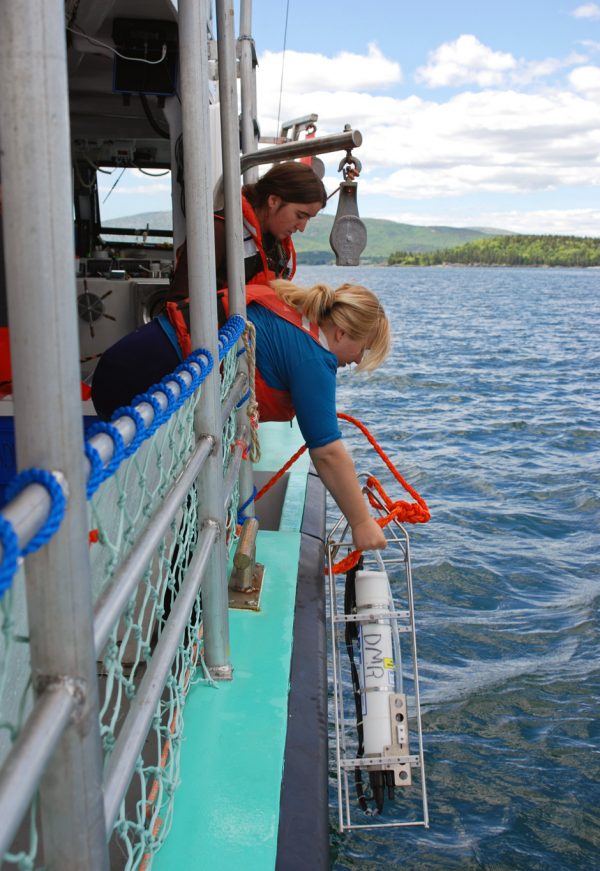 Mount Desert Rock also participates in gathering data for the Northeastern Regional Association of Coastal Ocean Observing Systems (NERACOOS). NERACOOS gleans data from coastal waters ranging from the Canadian Maritime Provinces to the New York Bight. NERACOOS provides quality weather and ocean data to fishers and commercial shippers so they can determine if their travel routes are safe for passage and to emergency managers issuing storm warnings. NERACOOS also advances efforts to improve water quality monitoring, harmful algal bloom predictions/warnings, and coastal flooding and erosion forecasting systems. NERACOOS uses a system of buoys and weather stations to provide data for weather modeling. A weather station mounted to the light tower at Mount Desert Rock has been providing NERACOOS data since the early 2000s.

“Our data tells us that the Gulf of Maine is warming dramatically, and we believe that is affecting the Gulf’s prey-base,” says Todd. “We are working with local research groups to gather and evaluate some of our data.”

Because of their long occupation of Mount Desert Rock, Allied Whale has been able to collect data on humpback, finback, right and minke whale distribution for almost 50 years. Longitudinal data such as these are highly valued and can be used to assess long-term trends in populations. “It looks like the North Atlantic right whale might be abandoning the northern Gulf of Maine due to warming,” Todd notes.

In addition to all those data, Allied Whale is currently sampling their resident large whale species to examine their diet. This is done by biopsying live individuals. Biopsies are then examined for evidence of consumed diet through a technique known as stable isotope analysis. This method allows the group to determine what a whale has been eating for the past two months. To get the biopsy from a live animal, Todd uses a crossbow to deliver a modified dart that has an apple corer style end; this samples a small plug of skin about the width of a pencil and less than an inch in length. “We conduct this work under strict oversight and through a permit provided by NOAA,” says Todd. “We can look for the isotopic signatures of different prey types the whale has eaten.” A good baseline exists for prey types of these whales in past years, and those samples are compared to current samples to see if animals are shifting their diet, perhaps in response to the warming Gulf of Maine. “This area is one of the fastest warming patches of water anywhere,” says Todd. Because of the speed at which warming changes are occurring in the Gulf of Maine, warming differences are especially pronounced and may well be affecting wildlife more acutely than in other areas. 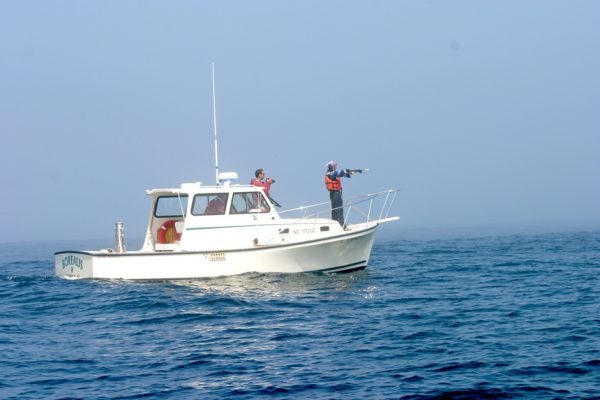 The Allied Whale team waits patiently for their whale to surface. A team member stands at the bow with the crossbow biopsy system ready to deploy (Photo Credit: S.Todd, taken under NOAA permit #526-1523-00)

Allied Whale staff and students at Mount Desert Rock are also part of a network that is tracking Unusual Mortality Events (UME) for marine mammals. While it is fairly common for a few whales to beach annually, sometimes the coastline experiences a larger volume of strandings, creating a UME. Allied Whale, along with other stranding response institutions in the Northeast, is currently tracking UMEs for right, humpback, and minke whales, as well as a fourth, for local seals. “It’s unusual to experience that many UMEs simultaneously,” says Todd. Determining a UME is based on comparing current mortality to NOAA data taken over tens of years in the past. If there is an unusual number of deaths, a UME is declared. “Perhaps one of the most important consequences of a UME declaration is that it releases federal funding that allows us to dig deeper into possible causes for those increased deaths,” Todd mentions.

There may be a link between the current UMEs and the environmental changes that Todd and his colleagues have been observing. “If the Gulf of Maine environment is warming that dramatically, that impacts everything, including the food sources of whales. If there is a decline in food, then that makes it more likely that the whales will succumb to environmental stressors and there will be more catastrophic events,” explains Todd.

The impact of a UME varies depending on the robustness of the population. “Humpbacks have been delisted, so the declaration of a humpback UME is certainly concerning, but not as critical as it is for more endangered species; for example, there are only around 400 North Atlantic right whales left on this planet period, so any mortality for them is a substantial concern and has the scientific community scrambling,” Todd says. 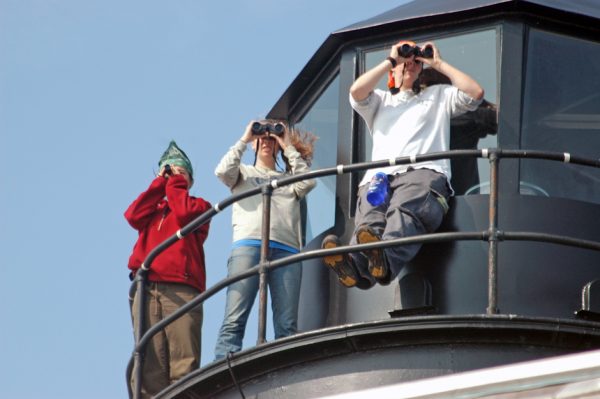 The College of the Atlantic team using the cupola atop the MDR light tower to look for whales (Photo Credit: S. Todd)

In his many years at Mount Desert Rock Field Station, Todd has held an admiration for the sparse island environment. “It’s actually an addictive environment,” he says. “You are really in the environment, and it’s a privilege to be here. There’s a beauty in the isolation. There’s a zen-like quality.”

As for his mission at Mount Desert Rock, Todd says, “It’s about caring for the ocean. Here we are seeing firsthand the effects of climate change. I want to emphasize that. I hope the work we do will show the importance of the ocean in our lives.”