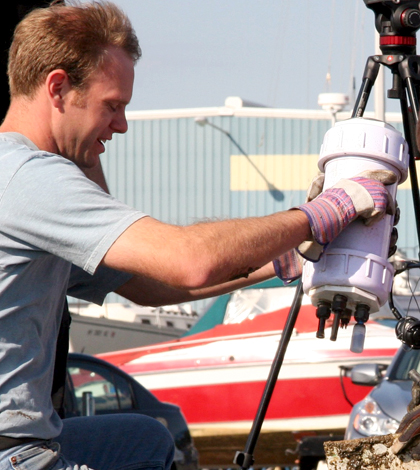 A new low-cost, real-time water quality sensor developed by the Beacon Institute and Clarkson University could help scientists and managers clean up the Hudson and St. Lawrence rivers.

The River and Estuary Observatory Network II sensor is “the first technology development project of the Beacon Institute after Gov. George Pataki founded the Institute,” said Timothy Sugrue, Beacon Institute president and CEO. The institute is a research facility dedicated to studying rivers and estuaries, and an auxiliary of Clarkson University.

REON II will replace the previous REON I monitoring system, which was based on floating sensor packages launched six years ago. Its sensitivity to ice kept it from being deployed during the winter. REON II is permanently placed on river banks, which makes it better able to monitor safely in spite of the weather.

The sensor, built by collaboration between the institute and Clarkson University, measures dissolved oxygen, turbidity, conductivity, chlorophyll, and polycyclic aromatic hydrocarbons. It took about six years and several million dollars to complete, Sugrue said. “This has been a public partnership to get us this far. Part of it is the state of New York and a part of it is the university that takes engineering seriously,” he said.

Beacon Institute and Clarkson chose to build the sensor because there wasn’t anything in REON II’s price range that could match its capabilities, Sugrue said. Commercially available sensor packages measuring the same range of parameters can cost up to $24,000, while REON II costs around $1,200. “In keeping with our mission of answering critical water challenges with technology, it was clear that we needed to find a way to make water quality sensing universal — to set a new standard for environmental protection,” he said.

REON II, launched in October, has been working well by providing scientists with consistent data as they seek to better understand the delicate connection between the environment, water and human activity. “In a project like this, you have your ups and downs. This year has been the best,” Sugrue said.

Sugrue said his team views the project as a learning tool. In addition to practical discoveries such as finding “optimal places for monitors and how long a monitor can be in the water before maintenance is needed,” the researchers will also aggressively analyze their data results, he said. “That’s where we’re going to unlock the secrets.”

The data they collect could lead to tracking chemical or biological pollutants, which could be meaningful for both public health and homeland security concerns. Three more stations will be added by spring, Sugrue said.

Ultimately, the institute plans to make highly efficient yet affordable monitoring systems available globally, which could be pivotal for environmental science. “We know of no other homogeneous network of sensors in the world,” Sugrue said. “The way we developed [the sensor’s software], it could be picked up and used anywhere in the world and we’d love to see that happen.”