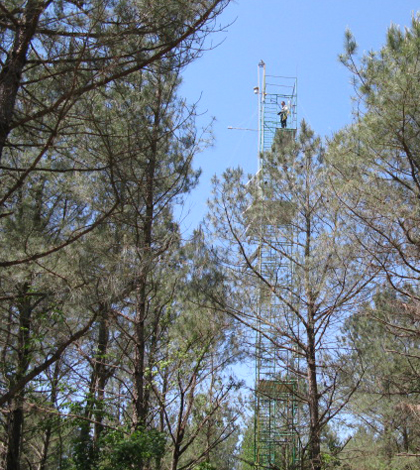 Determining exchange rates of carbon dioxide between the earth’s forests and the atmosphere is turbulent business.

Wind above forest canopies swirls as vortexes of air enter and exit stands of trees.  Across the globe, towers stand among the landscape, with sensors monitoring these eddies for carbon dioxide, water vapor and other gasses.  These so-called “flux towers” collect data on carbon dioxide exchange rates between the earth and atmosphere.

Information gathered plays into the debate on the measurable effects of climate change.

Carbon dioxide flows between the earth, atmosphere and ocean in an attempt to reach equilibrium. As automobiles and energy production facilities burn fossil fuels, more carbon dioxide joins to the mix. Plants, on the other hand, act as a sink for carbon dioxide reducing global concentrations.

Flux towers give researchers the ability to watch as carbon dioxide concentrations vary between the earth and atmosphere, signalling  the increase or decrease of the gas in forests.

Fluctuations of carbon dioxide are clearly visible in long running flux measurements, though researchers are not ready to point the finger at any one cause.

Harvard has the longest running flux tower measurement system on the globe, which offers unparalleled insights to the performance of ecosystem carbon cycle. Measurements indicate doubling of ecosystem carbon uptake over the past 20 years at their sites, which was entirely unanticipated in a forest of its developmental stage, said Asko Noormets a forestry professor at North Carolina State University and lead principal investigator of NC State flux tower monitoring sites in the Ameriflux Network.

Researchers evaluate exchange between forests and the atmosphere through a method called eddy covariance.  It uses century-old ideas with new technology to examine carbon fluctuations at fixed points.

“The methodology is based on capturing the high-frequency information carried by wind,” said Noormets.

By monitoring wind and gas concentrations at high frequency at a fixed point above vegetation, one can deduce exchange processes that occurred upwind. Theoretical concepts underlying the eddy covariance technique date back to the 1895 work of Osborne Reynolds, a British physicist whose research is the foundation for principles of fluid dynamics relating to fluid turbulence.

The technologies that make continuous measurements of eddy flux possible have only recently come of age, said Noormets.

NOAA researchers started measuring flux exchanges in the 1970s. The instruments they built were complex and could only sample for a few days at most, due to sensor and data storage limitations, he said.

Early instruments needed more frequent calibration and repairs, requiring engineering expertise. Advancements in sensor technology, interface and reliability allow the operation of a typical instrument system by anyone, said Ge Sun, a hydrologist at the Eastern Forest Threats Assessment Center. “Nowadays, it seems much simpler because of computers and storage and technology,” he said.

Instrument prices decreased and reliability of instruments increased in the 1990s, allowing university scientists to incorporate flux measurements into their research. Two sensors are at the core of flux measurements: a water vapor-carbon dioxide sensor and a three-dimensional wind speed and direction sensor, or sonic anemometer.

Radiometers and infrared gas analyzers are also used on the towers.  Methane concentrations have been a hot topic in flux measurement, as researchers think it will have a greater effect on global climate in the short term. Once data are collected by the tower, which typically samples continuously, the information is converted, processed and corrected, resulting in estimates of flux of an area. “We can then infer the exchange of that particular gas and the properties of the ecosystem where that exchange occurs,” Noormets said.

When it comes to building a flux tower, Sun and Noormets recommend that newcomers seek help from someone experienced in the discipline. They also recommend following broadly accepted best practices for site setup and data processing, both of which have been outlined in a number of recent publications. For example, LI-COR engineer George Burba published a free eBook on eddy covariance measurements.

There are also networks of universities and research organizations across the globe, such as the newly established Ameriflux Network and the U.S.-China Carbon Consortium.  Aspiring flux researchers can communicate with established scientists in the field and learn about their methods.