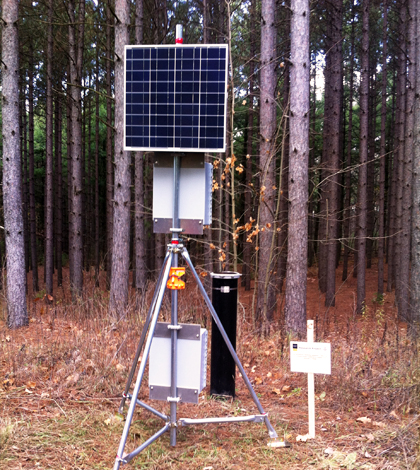 As a graduate student in Ontario, Jana Levison manually sampled groundwater wells in a hay field for a week straight. Now an assistant professor in the University of Guelph’s School of Engineering, Levison is investigating how a new generation of water quality sensors can move the science forward while cutting the labor back.

Levison said her doctoral work in a crystalline bedrock aquifer showed monthly variations in nitrate — a common groundwater contaminant often sourced to intensive agriculture — and daily variations in E. coli. Those short-term changes got her interested in watching groundwater in a more detailed manner.

“Now we have the equipment that we can do that,” Levison said. That equipment includes YSI’s EXO multi-parameter sondes and Satlantic’s SUNA nitrate sensor. She and graduate student Graeme MacDonald are developing continuous monitoring stations that put those instruments in groundwater wells across Southwestern Ontario.

Their sites include Guelph, a city 60 miles west of Toronto that is among the largest in Ontario to draw all its municipal water supply from groundwater. The city sits over a fractured bedrock aquifer, which Levison described as a sensitive one that the city and surrounding rural areas depend on for drinking water.

They’re also looking at sites to the south in Norfolk County, an area of intensive agriculture over a shallow water table and a sandy aquifer. “It’s very easy for nitrate leaching to occur,” she said. “They do have a nitrate problem.”

MacDonald has only recently set up the stations, but the thought is the high-resolution data collected from the Norfolk wells might reveal influences from groundwater recharge events as well as seasonal influences related to the timing of fertilizer applications. But they won’t know for sure until the data starts piling up.

“It might be a very consistent plume that’s not changing a lot,” Levison said. “But we want to see what it is.” Using sensors to collect continuous, long-term data on groundwater quality is still a novel method that appears to be picking up steam. As the technique develops, researchers are working out the best monitoring station setup for their applications. The U.S. Geological Survey’s Enhanced Trends Network has been collecting data for a little more than a year with similar instruments at eight sites across the U.S. According to Justin Kulongoski, a USGS research hydrologist who works on that network, they initially deployed their sensors down in the boreholes of the wells they were monitoring, but switched to a flow-through sampling system at the surface. They found that the water quality within the boreholes followed their own trends that didn’t appear to be associated with what was going on in the aquifer.

Levison and MacDonald, however, are going the borehole route. Their hope is that by not pumping water to draw a sample, they’re getting a better look at the aquifer in its natural state.

Very little research on this type of groundwater monitoring has been published, Levison said. So she and her colleagues have the privilege of paving the way while the technology and methods continue to evolve for what could prove to be an important part of future groundwater research.

“We’re testing it,” Levison said. “I don’t know if it’s going to work well, but we’re going to see what happens.”