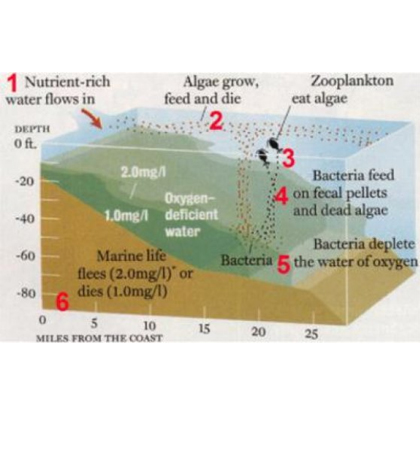 The Gulf of Mexico dead zone is predicted to be about 5,483 square miles this year, according to a recent press release from the National Oceanic and Atmospheric Administration. Also known as the hypoxic zone, the dead zone is the area of water in the Gulf with the lowest oxygen and relatively little marine life. Although the dead zone for 2015 may seem quite large, the area has been stable in size for several years, researchers say.

For the first time, results of four models were combined to give the estimate. Combined results from several models are also referred to as an ensemble forecast. Nutrient runoff and stream data from United States Geological Survey was used for model input. USGS data used for the ensemble forecast included information from thousands of real-time stream gauges, real-time nitrate level sensors and monitoring information from long-term stations.

The latest nitrogen levels were found to be somewhat higher than the long-term average while phosphorus levels were somewhat lower.

The long-term environmental monitoring techniques used in the current study should help researchers to continue improving river management practices, improve ensemble forecasts and improve understanding of how nutrients move through the Mississippi River and the Atchafalaya River, ultimately flowing into the Gulf of Mexico.