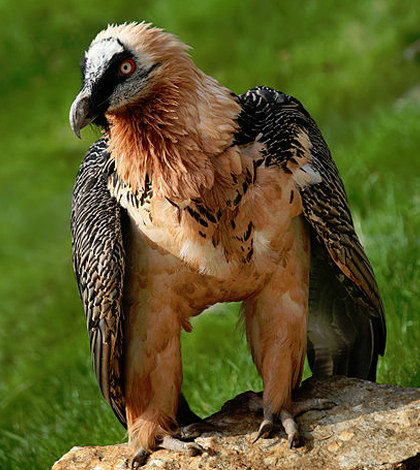 The bearded vulture is considered Near Threatened with a decreasing population. (Credit: Richard Bartz, via Wikimedia Commons/CC BY 2.5)

The only thing harder than finding a needle in a haystack is tracking an endangered needle in a haystack spanning thousands of kilometers. Such is the plight of researchers studying the bearded vulture, a necrophagous bird whose population has diminished over the past century to the point of being declared endangered by the EU Birds Directive.

The elusive vulture lives in the Spanish Pyrenees, but with an average home range of 11,700 square kilometers, it can be a hard bird to track. Using satellite and radio technology, the Foundation for the Conservation of Bearded Vultures conducted a tracking project from 1990 to 2006. The project helped narrow down the precise range of the birds’ movements, as well as pinpoint the places they prefer to feed.

Earlier studies depended purely on radio technology, limiting the efficacy and resolution of tracking, Juan Antonio Gil Gallus, a founding member of the foundation said in an email. He was among a team of researchers analyzing data generated from the project between 1999 and 2006. During that period, researchers tagged vultures with GPS satellite transmitters. The newer tagging technology also featured improved batteries, allowing the researchers to track the vultures over longer spans.

Field work for the project was varied, ranging from monitoring breeding stock — in the Aragon region of Spain, for instance, breeding pairs have increased from 39 to 86 over the past two decades — to studying foraging locations. Analysis revealed that bearded vultures in the Pyrenees visit supplementary feeding points and established foraging locations on a slightly smaller scale than populations in South Africa, but on a larger scale than earlier studies had suggested in the Pyrenees and the Alps. Young and inexperienced birds especially rely on predictable food sources within their home range. Furthermore, Gallus wrote that the researchers were surprised to find that none of the nine tagged individuals left the Pyrenees during their lengthy flights.

“One problem with this type of work, and more with this species, is that you work with a small number of [individuals] and you need several years and a stable source of funding to develop the work,” Gallus said.

The foundation plans to continue this research by releasing and tracking bearded vultures in the Cantabrian Mountains.

Top image: The bearded vulture is considered Near Threatened with a decreasing population. (Credit: Richard Bartz, via Wikimedia Commons/CC BY 2.5)