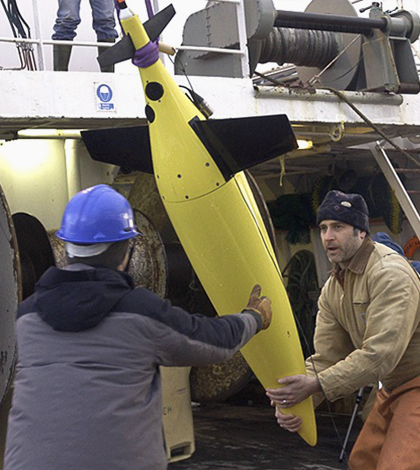 Spring’s arrival is most apparent on land, but a similar seasonal burst of green occurs in parts of the ocean. In the North Atlantic, a massive phytoplankton bloom occurs each year at springtime. Spanning from Bermuda to the Arctic, the growth accounts for 20 percent of all oceanic phytoplankton blooms worldwide.

A multi-institutional study, funded by the National Science Foundation, examined the role of the North Atlantic Bloom in the global carbon cycle, and how phytoplankton cells sequester atmospheric carbon. Building off a 2012 study that identified the interaction between oceanic eddies and phytoplankton blooms, the new paper, published in the journal Science, was researched with the help of autonomous monitoring platforms.

“We designed this experiment to go to a really important part of the ocean, in terms of the carbon cycle,” said Mary Jane Perry, one of the study’s principal investigators and co-authors.
“We were using new technology in a new way in order to have a continuous presence in a remote, inhospitable part of the ocean.”

Traditionally, oceanographic research has been limited by accessibility. Research vessels are expensive to operate, so oceanographic experiments have been restricted to small areas and relatively short durations. The new study takes a novel approach, Perry said, by relying on remote monitoring and using ship-based sampling to verify the collected data. Based out of Reykjavik, Iceland, the study employed two types of autonomous monitoring platforms: floats capable of limited vertical movement throughout the water column, and underwater gliders that could travel up to 13 horizontal miles per day by “swimming” in a sawtooth pattern. Both platforms carried a suite of sensors for measuring salinity, nutrient concentrations, phytoplankton presence and other important parameters.

Carbon dioxide is one of the fundamental building blocks for phytoplankton growth. When blooms metabolize carbon in the water, atmospheric carbon dioxide replaces it. As phytoplankton cells die, carbon contained within each one is carried to the bottom of the ocean, helped along by small eddies in the water.

“Using these gliders, which were making measurements all the time for two months down to 1,000 meters, we were able to observe the phytoplankton bloom,” Perry said. “If we didn’t have these robotic samplers, these gliders, we would have missed this big removal event that brings carbon from the surface.” The gliders permitted the researchers an up-close, unparalleled view of the processes by which phytoplankton sequesters carbon. While carbon burial through cell death is fairly well-understood, the researchers observed another process that hadn’t been witnessed before.

Diatoms, one of the major organisms comprising phytoplankton blooms, use aquatic silica to form glass-like cells. Using the gliders, the researchers found that when the diatoms lose access to silica, they clump together and sink rapidly to the seafloor. Constant sampling in and around the bloom also revealed phytoplankton and dissolved oxygen concentrations in deep waters at levels normally observed near the surface.

Perry said the study was made possible by extensive international collaboration with principal investigators, undergraduate and graduate students coming together from an array of institutions.

“This type of study couldn’t have been done by one person, or even one discipline,” Perry said. “It’s really a beautiful example of a project that started with multiple people from multiple institutions, then brought in others when we realized that even we, as an interdisciplinary team, couldn’t answer the questions.”