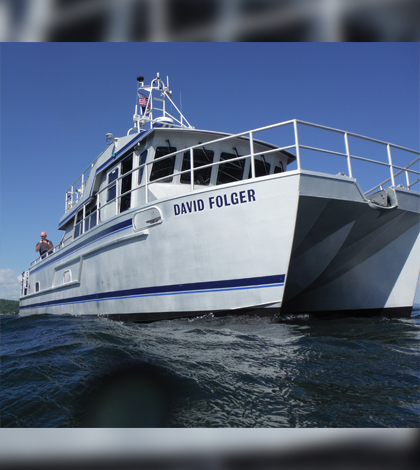 Lake Champlain’s size and saltwater history makes it a great place for inland academics to study oceanography and marine geology. Middlebury College’s loaded R/V David Folger is a great way to get students on the water.

“She’s an incredible platform to teach from,” said Patricia Manley, a professor of geology at Middlebury College in Vermont.

The 48-Foot R/V David Folger is equipped with state-of-the-art instruments to map the lake bottom, track currents, measure water chemistry and sample sediments. It’s at the forefront of the experiential, hands-on approach to learning in Middlebury’s geology courses.

“We make sure we are out in the field every week and making sure students learn the whole process of how to collect data, how to interpret data and how to present that data,” Manley said. “In essence, it’s the scientific method.”

The students can collect that data with acoustic Doppler current profilers, a multi-beam echo sounder, a CTD rosette and sediment corers. What they’ll use depends on the research focus at the time. For introductory-level oceanography classes, the students get a choice between tasks like mapping bottom morphology, or looking at circulation, water chemistry or sediment history.

The students aren’t just sent out to rediscover the same features of the lake over and over again. They’ve made a few discoveries, including a coastal jet and a bathymetric feature previously known only to fishermen but absent from some maps. Last fall, a class found a large underwater landslide.

“Every time we do this — it’s amazing — we find new things,” Manley said. The vessel has lab space and is outfitted with SmartRoom technology that can project data from the instruments. That means, for example, they can take a temperature profile of the lake and immediately display it for a group discussion on where in the water column they should deploy additional instruments.

The R/V David Folger was funded by a $1.7 million grant through the National Science Foundation from the American Recovery and Reinvestment Act. The college designed the vessel, which replaced the R/V Baldwin, a 32-foot lobster boat retrofitted for research back in 1985.

The committee that designed the Folger sought input from folks outside of the geology department that would be likely to use the vessel. They wanted it to support anybody who wanted to go out on the lake. After all, the last boat had accommodated users from biologists to a dance class, Manley said. Manley with a group of students in the R/V David Folger’s lab space (Courtesy: Patricia Manley)

The dancers wouldn’t likely need the echo sounder, but that and the other tools will keep science students well versed in modern oceanographic instruments while uncovering more about what lurks beneath Lake Champlain’s deep waters.

“It’s fun,” Manley said. “In a sense, if you took a big research vessel and shrunk it down to 48 feet it almost has everything that they do, but not quite.”