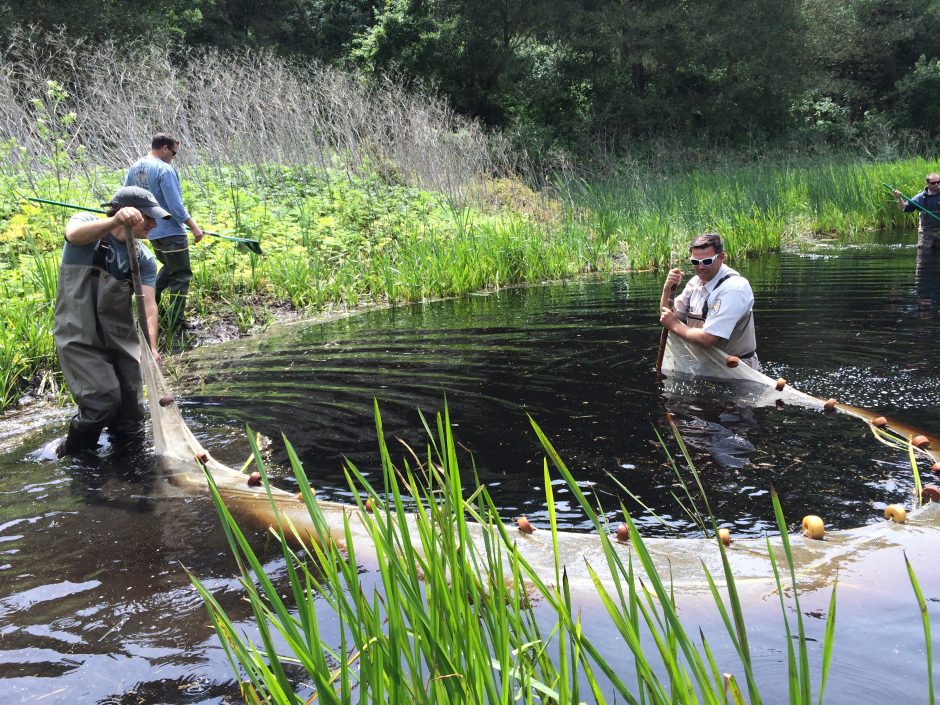 While many National Estuarine Research Reserves (NERRs) monitor for shorebird, fish and crab populations, Susanne Fork, research biologist at Elkhorn Slough NERR in California, delights in the small and the slippery – amphibians, insects, clams, and worms. “Salamanders are an important part of our work, with some rare species making their homes here. There is also a threatened frog species we monitor for here too. If you’ve ever heard of the Jumping Frog of Calaveras County, in the Mark Twain story, that species of frog is at Elkhorn Slough. It’s called the California Red-legged Frog, and it’s actually becoming rarer over the years,” she says.

Fork has been a research biologist at Elkhorn Slough NERR since 2001. “We do shorebird monitoring here quarterly, with lots of volunteer assistance,” she notes. “For birding, people bring their own equipment, binoculars and spotting scopes. Staff uses various optics (including Vortex, Eagle Optics, Nikon), and volunteers have additional favorite optics (Swarovski, Leica, etc.).”

In addition to shorebirds, Fork and volunteers revisit the Elkhorn Slough mudflats once a year to gather data on clams, shrimp and worms. They look at density data along five transects. “Much of the monitoring we do helps to generate baseline data,” says Fork.

To a casual observer, the two endangered salamanders Fork looks for appear somewhat similar but have key differences. While both California Tiger Salamander and the Santa Cruz Long-toed Salamander are both black with lighter markings, they can be differentiated visually. “The California Tiger Salamander is larger, growing to 7-8 inches long and is black with yellow blotches. The Santa Cruz Long-toed Salamander is also black, but is smaller (4-6 inches) has an orange dorsal stripe with white side speckling. Some of its toes are relatively long for its size (hence its name) and skinnier,” says Fork. Monitoring of amphibian species is performed by looking at individuals caught by nets and estimating total numbers based on numbers caught. “It’s important to sample a number of bodies of water before estimating the population size. Ponds are all different. You can have a lot of a species in one pond, and hardly any in another. To get a sense of what the population density is like for an area, you have to look at several ponds to really get a sense of the variation,” Fork explains. “We also take the size of the pond into consideration when we do estimates. The number of amphibians we see in a puddle will translate differently into real numbers than the numbers we see in a large pond. What we see in the puddle will probably give us the total count, whereas in a big pond we will only see a fraction of the true number.”

“When estimating populations of sensitive species it is important to survey as many areas as you can as many species have patchy distributions,” Fork notes. “If you just looked at one pond, you might see many of a threatened species, such as the Red-Legged Frog, and think that means the species is doing well. What you are missing, though, is that the species may not be in any of the nearby ponds. The species might be declining, but data from just that one pond won’t demonstrate that. That’s why baseline data is so important. You can see the overall trend of how the species is doing over time.”

Monitoring insect populations also has some surprising complexities. “Insect communities vary a lot depending on the vegetation,” says Fork. “We have an oak restoration project here. We are trying to encourage the growth of native understory plants under California Live Oak (also known as Coastal Live Oak) and then want to compare insect communities in the restored vs. unrestored habitats. We are also looking at insect communities associated with native vs. non-native trees, such as between native Coastal Live Oak and nonnative eucalyptus habitats.” Insects are caught in pitfall traps in their outdoor habitats, then counted and analyzed. “For the oak restoration study, we plan on redoing the insect study in five years and compare it to today. We will compare insects to see what the differences are in terms of who is populating the native and non-native habitats,” Fork elaborates.

There are a variety of reasons some species at Elkhorn Slough are becoming less and less common. Sometimes it is a combination of factors, such as competition with other species, habitat change or maybe even climate change. Sometimes one of these factors seems to outweigh the others. “The Red-legged Frog might be becoming less common because it is having more trouble finding food,” says Fork. “Amphibians generally are not fussy and will eat whatever they can fit in their mouths.  But Red-legged are competing with bullfrogs for food resources. The bullfrogs also get bigger and will also eat Red-legged Frog adults and their young.”

Climate change can be another factor decreasing population for many species. “Since 2006 we’ve been in a drought state,” says Fork. “You might think that if we’re in drought but it rains again, then the drought is over and everything recovers. In reality, it can take years of above average rainfall to make up for a drought and to get species back on track. That’s because it takes time for depleted aquifers to fill back up. Just one heavy rain after a drought is not adequate for recovery. Even several may not be adequate.  It takes time to recharge depleted groundwater reserves.”

Luckily, some species have built-in mechanisms to help them cope with drought conditions. “Salamanders can survive for some time, perhaps going for years without breeding, waiting for the right, wet conditions. Interestingly, they seem to be able to sense decreasing barometric pressure that occurs before rain. They will come out of their hiding places and start traveling if they sense rain is coming. At Elkhorn Slough there have been sightings of whole groups of them on the move at night before a rain. It’s really something to see,” says Fork.

Elkhorn Slough NERR has many people watching its wildlife, including about 15 to 20 volunteers gathering data every quarter to survey shorebirds. “We couldn’t collect the information we need without them,” says Fork. Many of the volunteers are retirees or grad students. The students (or former students) often come from Stanford, UC Santa Cruz, or California State Universities. The annual mudflat data is collected by two or three staff plus three or four volunteers. Dip net studies are usually done by about three to six staff members and up to ten volunteers over the season. In September, November, March and April, shorebirds are counted by many volunteers. “We have a great diversity of birds that come here,” says Fork. These birds include: herons, terns, egrets, gulls, sandpipers, ducks, grebes, willets and godwits. “They like to show up at low tide and look for exposed creatures they can eat,” says Fork. “They have specialized beaks for probing or extracting morsels from mud or water.”

Elkhorn Slough shares data with Point Blue (a non-profit bird organization focused on bird conservation) as well as Cornell University, well known for its ornithology program. In addition to the many shorebirds, other birds of note that Elkhorn Slough NERR monitors for are the Chestnut-backed Chickadee and the Oak Titmouse. “We started an oak woodlands nest box monitoring program in 1997 with 160 wooden nesting boxes. Groups of nest boxes are adopted by volunteers and are observed each spring to determine which bird species uses them, the number of eggs laid, and how many fledglings are seen,” says Fork.

In her years at Elkhorn Slough, Fork has seen many changes. “The ongoing drought has had a big effect on some of the species,” says Fork. “Amphibian numbers have dropped. Even though we’ve seen some short-term improvement in terms of the drought, Red-legged Frog numbers have not had another rebound, probably indicating the severity of our ongoing drought. Bird numbers, on the other hand, seem to go through minor boom and bust patterns over the years.” Fork has found research at Elkhorn Slough NERR to be very rewarding, with many surprises along the way. “It’s really neat to see how resilient the birds are. Sometimes nesting boxes get knocked over, and the birds just keep nesting in them. The Tiger salamanders have shown real resilience, too. Sometimes you’ll go out in the field and think, there’s no way there are still tiger salamanders living out here after all the dry years, but then you’ll find some.  It’s also amazing where Tiger salamanders breed-sometimes we find lots of their larvae in little muddy artificial agricultural ponds. It’s been a learning experience for me,” she says.

Elkhorn Slough NERR is a place rich with organisms, with great diversity. “With the sheer number of shorebirds here, it’s amazing that you can still hear their individual voices and wings in a flock. But you can,” says Fork.

In addition to all the special monitoring done at the NERR, they also do standard SWMP monitoring, such as using EXO-2 sondes to gather information such as water depth, conductivity, temperature, salinity, pH, dissolved oxygen and turbidity. They also use a Campbell Scientific data logger, a R. M. Young instrument for wind speed and direction data, and a Vaisala probe for barometric pressure. “It’s important to gather baseline data,” says Fork. “It helps show us what the trends are. If you take all the data together, you can see how some of our species are in trouble. Then the question becomes: what can we do to help?”