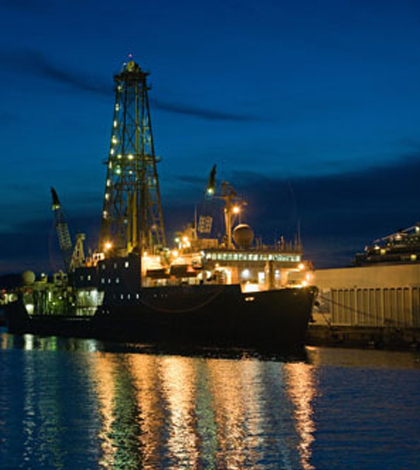 Most ocean sediment cores from the Arctic and subarctic regions give a glimpse of up to 100,000 years back in time, a staggering amount of history to consider given our human lifespans. But as difficult as it is to imagine the world 100,000 years ago, a research team from the University of California, Santa Cruz, including Karla Knudson and Christina Ravelo, has added a factor of 10.

Their recent research comes from analyzing a core from beneath the Bering Sea floor that goes about 1.2 million years back in time. Using their data, the scientists were able to discover another piece of the global climate puzzle: The driving force behind much of the North Pacific Ocean’s circulation, which is linked to climate change, is formation of coastal sea ice.

Knudson, a paleoceanographer and doctoral student in the Earth and Planetary Sciences Department at the university, explains that the Integrated Ocean Drilling Program which enabled the voyage and data gathering was a very rare opportunity to obtain info from the Arctic/subarctic that few could hope to match.

“The voyage where we obtained our unprecedentedly long records was IODP Expedition 323 to the Bering Sea,” said Knudson. “Before that voyage, our understanding about past climate change effects was very limited, since prior to that only short cores in the Bering Sea had been taken.”

However, Expedition 323 used IODP’s JOIDES Resolution, an international research vessel equipped with an advanced coring mechanism that has the capability to drill much further into the seafloor to collect sediment. “Only two or three ships can collect cores of that length, which are a few kilometers deep and several meters long,” Knudson says. On the expedition, the researchers took a series of successive cores that were each 9.5 meters in length until they reached a total depth of about half a mile in some places. Collecting the unusually long cores took longer than typical cores. Although a shorter core can be taken in a day on a one- or two-week cruise, the longer cores at seven Expedition 323 locations in the Bering Sea took about two months to collect.

Knudson described the Bering Sea as a “gateway” connecting the large Pacific Ocean to the climate-sensitive Arctic. Due to their unique position, these cores are ideally located to provide unprecedented information regarding the relationship between climate, North Pacific Ocean circulation and sea ice.

“These really long cores are so special not only because they let us look at conditions much farther back in time than before, but also because where the Bering Sea core was taken has a very high deposition rate compared to the North Pacific, meaning more information in a given amount of time,” said Knudson. “The particular site where the core was drilled had excellent preservation, allowing us to get a very high resolution record.”

Knudson has been analyzing foraminifera shells in the cores to determine past changes in climate and ocean circulation. The foraminifera make their shells out of calcium carbonate (CaCO3), and the geochemical composition of the shells provides sensitive information about the organisms’ environmental composition at the time they lived. Knudson analyzes isotopic ratios of foraminifera shells with an isotope ratio mass spectrometer, where she focuses on carbon and oxygen (13C:12C and 18O:16O) isotopic ratios. These ratios give her sensitive information about climate, ocean circulation, water temperature, salinity and global ice volume. The isotopic mass spectral analysis also shows researchers when sea ice has formed and where water has flowed and circulated during the past 1.2 million years.

As Knudson summarizes, sea ice formation releases salt into the surrounding surface seawater, creating dense brine capable of sinking. The water sinking from the surface of the Bering Sea to deeper depths changes the oxygen isotope ratio in the underlying water to reflect the surface water signature, and this change can be recorded in the foraminifera living at the bottom of the seafloor.

The process of dense water sinking near the poles is important to global climate because it initiates deep ocean circulation known as meridional overturning circulation, in which heat is transported through the ocean to different parts of the globe. Using their long core data, Knudson and Ravelo have been able to decipher repeating trends and have been able to determine what influences climate in the sensitive Arctic region: coastal sea ice. Their studies show that changes in sea ice distribution are important because they cause changes in ocean circulation and therefore global climate and temperatures.

Because of their unusually complete core data, Knudson and Ravelo were able to study “seesaw” variation, which refers to how the meridional overturning circulation in the North Pacific and North Atlantic could act in opposition, strengthening in one ocean basin while weakening in the other.

Knudson and Ravelo were able to show that there was in fact no see-saw effect: Pockets of brine formed in the North Pacific actually led to stronger meridional overturning circulation during times that the Bering Strait was closed, meaning two opposing circulation systems did not in fact exist. This discovery has greatly influenced the view of water and ice movement, and climate effects, in the ancient Bering Sea.

Although the data Knudson and Ravelo collected in their super-long cores would be a boon for those attempting to model climate over the past 1.2 million years and project the findings into the future, Knudson says the data have not yet been used for modeling purposes because they are so new.

“Our research was critical because it provided the longest and most high-resolution records of climate and ocean circulation of the important Bering Sea area, which is highly sensitive to global climate change, and will be in the future,” said Knudson. “Current climate models do include sea ice formation in the open ocean, but many do not have high-enough resolution to simulate coastal sea ice formation, which occurs in very small areas but is what is really driving ocean circulation and climate change processes.”