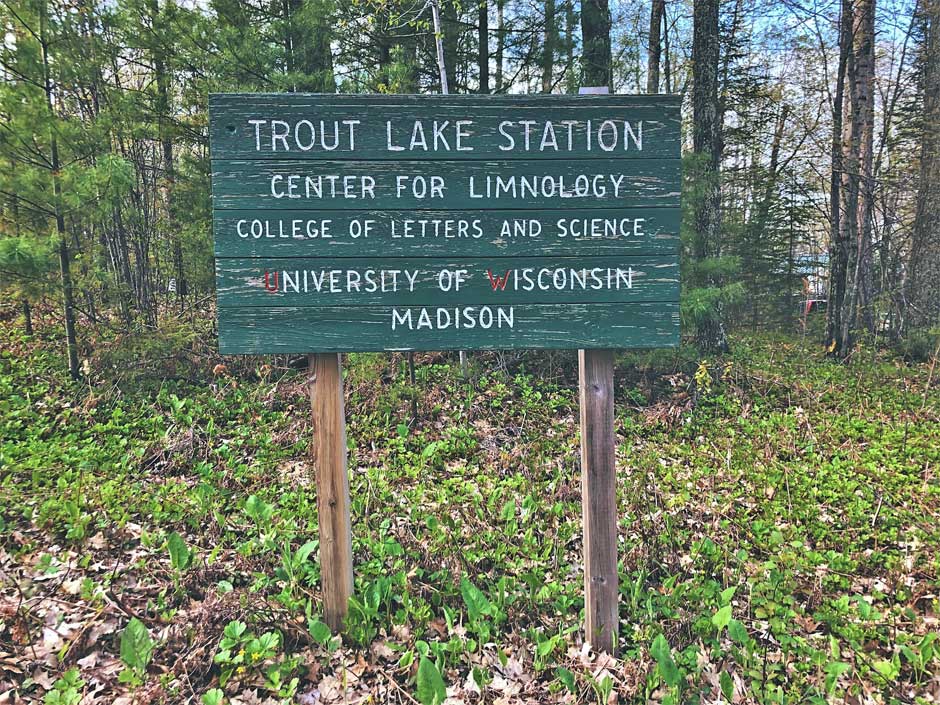 The sign welcoming visitors to the Trout Lake Station. The long-term research site hosts dozens of scientists every year and operates under the University of Wisconsin-Madison’s Center for Limnology. (Courtesy of Bethany Prochnow)

Summer’s effects on the ecology and hydrology within Wisconsin’s inland lakes are well studied. Data collection is easier and many field-deployed sensors and equipment can withstand the conditions of a Midwestern heat in July.

But what about changes in the winter? The historic assumption is that not a lot happens. Frozen conditions on the lake’s surface render the normally shifting environment underneath quiet and undisturbed. However, researchers at the University of Wisconsin Madison Center for Limnology are discovering that’s not exactly true.

“It’s often difficult to sample, especially during bookends when ice is just freezing or when ice is thawing in the spring. It’s just not safe to get out there,” said Noah Lottig. “So we’ve been working to develop platforms that can be deployed easily underneath the ice.”

In mid-to-late November, the underwater platforms that have sensors attached to them are deployed in one of several lakes monitored by Lottig and his research team at the North Temperate Lakes Long Term Ecological Research network. The sensors sit in the water until early May.

Data from the fieldwork measuring heat exchange and oxygen abundance will inform questions regarding lake stratification, long term changes to water temperatures and the role weather has in influencing the physical dynamics of lakes.

Lottig hopes the data collected will also inform management decisions and guide modeling efforts to better understand biology in the ecosystem – like thermal habitat loss for the walleye species, which is an important game species in Wisconsin.

To understand why recruitment for the organism is declining and the role climate change plays in that trend, scientists will need data that until recently was not feasible to collect. The necessary sensor technology was too expensive or wasn’t accessible. And without data from previous decades, it’s not easy to contextualize change over time.

However, researchers at the Trout Lake Station, which operates under the University of Wisconsin’s Center for Limnology, have benefited from the institution operating as a source of long-form research and data collection that few other places have had the luxury of working with.

Utilized by academics from around the world, the Trout Lake Station functions as a temporary home for anyone interested in studying the area. 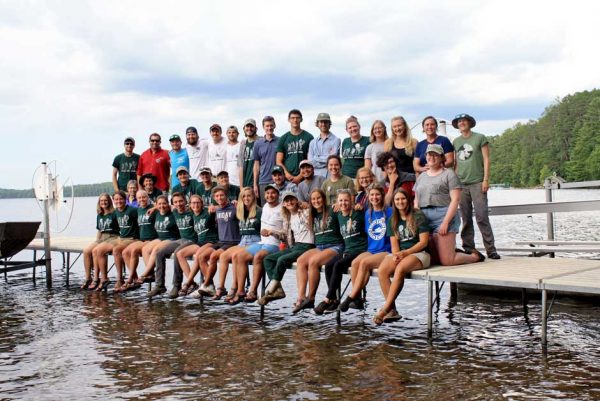 The crew from the Trout Lake Station’s 2019 year sitting on a dock extending into one of the many inland lakes under the center’s research. (Courtesy of Bethany Prochnow)

“We have more than 30 different organizations coming through for long or short durations to collect data. Each summer, we have 9-10 core projects that have students working and living on-site,” said Gretchen Gerrish, Trout Lake Station director. “We accept visitors from all over, as long as it’s research based.”

Originally founded in northern Wisconsin in 1925 and surrounded by lakes, Trout Lake Station got its start as a Long Term Research Ecological Research site in 1981 after funding was approved by the National Science Foundation. Catalyzed by a need for more robust research that tracks environmental changes over time, the station plays host to several research projects year-round.

One researcher from the University of Wisconsin Eau Claire is studying the species richness and distribution patterns of mosses in different water habitats. Another researcher from UW Madison wants to better understand the relationship between yellow perch and rainbow smelt fish populations.

Over the 2020 winter, two researchers periodically plowed the snow that blanketed the ice covering one of the many bogs in the region. They wanted to understand how sunlight affects the water chemistry and biological processes of organisms under the ice. With less snowfall leading to less snow cover in the region, the water column might be changing. Click To Tweet

Then there’s the Global Lake Ecological Observatory Network (GLEON), which interprets and disseminates high-resolution sensor data to help understand the response of lakes around the world. That could be modeling the metabolism across lake gradients, mapping climate change’s effects on spring-winter runoff and lake productivity or assessing mussel and zooplankton’s importance.

“Trout Lake Station has a long history and has been instrumental in developing approaches for deploying high-frequency sensors on lakes for monitoring a variety of water quality parameters,” Lottig said. “Two of the founding members (of GLEON) were researchers that did that kind of work at the Trout Lake Station.”

Since the early ‘80s, those scientists have deployed different versions of high-frequency sensing platforms on the lakes. Where earlier sensors were only built to measure dissolved oxygen and water temperature, newer ones can quantify a multitude of different chemical and physical dynamics of lakes, including carbon dioxide and methane, two primary contributors to the world’s warming climate.

In a current study, when looking at how levels of gas released into the atmosphere from lakes when ice cover melts, teams have deployed sensing platforms with eddy flux towers attached to them that monitor the output. While the high cost of that specific technology has made it inaccessible to most research centers, Lottig says sensor equipment has evolved a lot over the years and become more affordable. 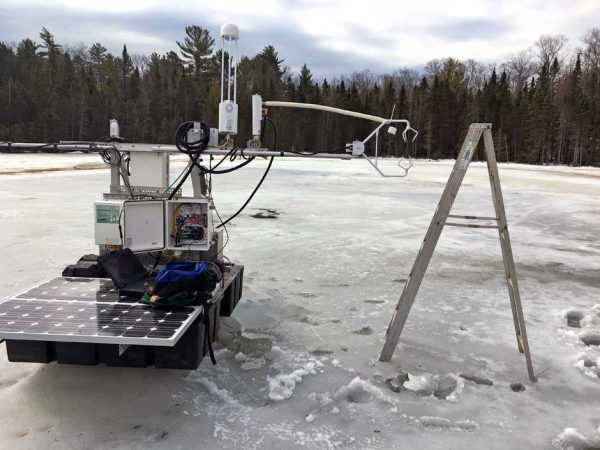 An Eddy flux tower resting on ice. In the winter, researchers placed eddy flux instruments to monitor the output of gas exiting lakes as temperatures get warmer. (Courtesy of Noah Lottig)

“One of the things we see is as that as the cost of sensors decline, we’re adding new sensors to the platforms,” he said, adding that more scientists will be able to incorporate them “once the cost becomes reasonable.”

The Trout Lake Station has capitalized on the opportunity by running workshops to make sensing data more available in more lakes. In one example, teams are educating groups on how to build temperature strings on their own. Where commercial forms of the equipment cost upwards of $15,000 apiece, their slightly-less accurate versions cost only $700.

“It’s bringing the community together to develop a knowledge base across agencies, academics and lake associations in a variety of different types of groups,” Lottig said.

Without the democratization of new and advanced equipment, research in understudied areas will continue to stymie efforts for scientists to understand their environment and managers to employ best practices in those regions.

Remembering the dearth of understanding of what happens in lakes when winter comes, a research team compiled much of the readily available research on what happens underneath ice in lakes around the world. They found studies completed at the UW Center for Limnology accounted for nearly half of all data globally.

“It has a big influence on the field and the ability of folks to ask and answer really interesting questions,” said Lottig.