Scientists Unravel The Mysterious Effects Of Thousands Of Toxic Chemicals 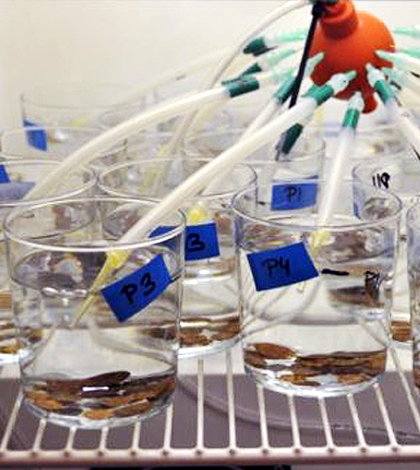 These samples each contained different amounts and mixtures of chemicals for the team to analyze. (Credit: University of Barcelona)

One of the consequences of modern life is urbanized water. As we congregate in cities, the water that flows away as runoff, even after wastewater treatment, is typically rife with a toxic cocktail of chemicals. New research from the Universities of Portsmouth and Barcelona now reveals that these toxic chemicals transform the way that many aquatic animals feed and swim — even when they are present in surprisingly low concentrations.

A History of Toxic Chemicals

The first synthetic pesticides were used in 1940. Rachel Carson’s ground-breaking book, Silent Spring, changed the way the world understood how pesticides impacted water quality in 1962. This led to a spate of new research and regulations such as the Clean Water Act which was enacted in the United States in 1972. But even as pesticides such as DDT were banned in countries like the US, they continued to be used elsewhere, and made their way into the waterways of the world.

Today, a huge variety of pesticides, herbicides and fungicides are in use worldwide. Regulation of the use of these chemicals is spotty. According to the World Health Organization, developing countries use only 25 percent of the world’s pesticides, but they experience 99 percent of pesticide-associated deaths. This is because of a lack of regulation and unsafe usage. The upshot for water is that in these areas there is often more impact on runoff from these chemicals, and less in the way of wastewater treatment.

Meanwhile, the pharmaceutical industry continued to grow. A 2013 study found that nearly 70 percent of Americans, for example, take at least one prescription drug. A report released in 2011 described an “astounding” increase in antidepressant use among Americans 12 and older between 1994 to 1998 and 2005 to 2008 of 400 percent. And according to the CDC, almost half of all Americans used one or more prescription drugs in the past 30 days.

New Research on the Toxic Cocktail

Trying to parse out the potentially toxic effects of a chemical cocktail is incredibly difficult. Professor Alex Ford of the University of Portsmouth’s Institute of Marine Biology explains the trouble in reliably predicting exactly what chemical mixes will be present in urbanized waters.

“I think that it’s fair to say people are trying hard to predict what certain chemicals might do in a mixture both through computer modeling and actual experiments, but predicting the real world with thousands of chemicals is incredibly difficult. Just by having two chemicals in an experiment both singly and in a mixture increases the factorial design of the study and subsequently the costs, specimens used and logistics. Sewage effluent may contain four thousand different pharmaceuticals with different biological effects.”

This was what Ford and the rest of the team faced as they undertook this research.

The team found not only that these toxic chemicals may affect aquatic life even when they are present in surprisingly low concentrations, but also that they can produce unexpected results, depending on the specific cocktail of toxins that is present. As a result, the scientists behind the research have called for heightened consideration of both mixture toxicity and low dose testing in the context of risk assessments concerning aquatic environments.

Dr. Ford explains that much of the urban waterways of the world receive a “cocktail of pollutants” from a range of sources, including human sewage, agricultural runoff, and industrial waste. These pollutants often include varying concentrations of medicines such as antidepressants. And while such cocktails may not kill marine species outright, they don’t leave them unharmed, either. Instead, Dr. Ford and others are concerned about the possible sub-lethal effects certain pollutants could be having on aquatic species and entire aquatic ecosystems.

One of the major problems with water quality assessment measures of the past as they dealt with aquatic life is that they were not sensitive enough. Dealing with whether fish are living or dying in the presence of chemicals, however, is just one aspect of the problem. Growth and reproduction rates tell more of the story, but the team in this case used far more sensitive measures to draw their conclusions.

In this study, the team ran separate conditioning and feeding experiments and then undertook statistical analysis. In the conditioning experiment, they collected fallen leaves in late autumn. They then exposed them to river water and different concentrations of the fungicide Prochloraz, the antidepressant Fluoxetine and combinations of both. The various water samples were analyzed and the amounts of chemicals present in them were verified by liquid chromatography tandem mass spectrometry. Next, the team collected Gammarus pulex (G. pulex), a species of freshwater amphipod crustacean found across much of Europe, from the same area as the leaves. They acclimated them to lab conditions and measured them so that only specimens of similar size would be used. They then exposed groups of the G. pulex to different levels of chemicals, observed them and performed velocity assays on them with DanionVision™ (Noldus Information Technology, Wageningen, The Netherlands) and its software EthoVision®XT (v 8.1). At the close of the feeding experiments, the team conducted statistical analyses.

Dr. Ford explained, “We think that these behavioral measurements are very sensitive compared to some of the older, more traditional toxicity tests such as mortality, growth and reproduction. The field is relatively new but rapidly growing due to advances in computer technologies which can accurately monitor multiple behaviors very rapidly.” Animal feeding and movement patterns are more sensitive ways of detecting the sub-lethal impacts, both on individual organisms and entire ecosystems, because they are likely to be important elsewhere in the food chain.

Professor Ford and his team were surprised by their main finding: even at very low pollution levels, there were effects on the amphipods’ feeding and swimming speeds. The team chose the fungicide test because that substance is so frequently used in medicated products and agriculture. And while the team accurately predicted that the animals would prefer to feed on the leaf matter that had been broken down by fungus, they were surprised to see that even small amounts of antidepressants made them eat less.

Just as interesting to the team was the fact that the animals swam faster after being exposed to either chemical singly, but slower after being exposed to them both. This is critically important, because so often in the real world these chemicals are occurring together in water. The fact that these chemical “cocktails” are altering feeding and/or swimming habits might very well have knock-on effects in the reproduction, growth, and even survival of animals like the ones in this study, which play a crucial foundational role in the food chain.

Fungicides like Prochloraz are used to treat crops such as citrus fruit, garlic, oats, potato, rice and wheat and, consequently, have been found in the waterways of Asia, Australia, Europe and South America in high levels. Antidepressants have also been found regularly in urbanized rivers around the world and in both freshwater and marine environments. These chemicals enter aquatic environments all over the globe after sewage treatment processes — even those considered to be state of the art — fail to completely break them down. Research has shown that they can accumulate in the brains of some fish.

While toxicity tests for new compounds are common, the effects mixtures of toxic chemicals might have have been all but unknown until very recently. The findings in this work certainly highlight how urgent it is to understand the admittedly complex ways that chemicals and pollutants interact in the environment.

In other words, the various chemicals may or may not be present, and in a variety of combinations and amounts. So how should people working in water quality and testing approach this problem? Is there a way to manage it well? Or is the answer more to treat effluent and run-off more effectively?

Dr. Ford responded, “I’m no chemical/wastewater engineer, but it appears that upgrading wastewater treatment plants to the best available specification would be the best way forward, albeit very expensive. Evidence has shown that with improvements to wastewater treatment there are considerable reductions of feminized fish downstream.” An example of this is the multi-million dollar upgrade a Boulder, Colorado wastewater treatment plant underwent in 2010. This upgrade mitigated a feminization trend that researchers had noticed in the past. Of course, this is also a problem with tremendous regional variation. Of course there are broader patterns, such as a greater likelihood of finding more antidepressants in waterways near urban areas, and more of certain agricultural chemicals and pesticides depending on local regulations.

Dr. Ford commented, “I think there is huge variation in the prescriptions of medications both between and within countries which might create variable concentrations in rivers etc. Similarly there is considerable variability in the pesticides used internationally with some countries banning and others licensing their use.”

What will this mean for regulators and scientists? Should environmental risk assessment protocols change generally?

Dr. Ford answers, “Perhaps as the behavioral toxicology field develops over the coming years, they should take these studies more into account. I think the behavioral toxicologists have to optimize and validate their experiments, and more effectively demonstrate ways in which changes in behavior can impact growth, reproduction and mortality — in other words, put these things into the language that regulatory and risk assessment bodies can understand.”

Top image: These samples each contained different amounts and mixtures of chemicals for the team to analyze. (Credit: University of Barcelona)