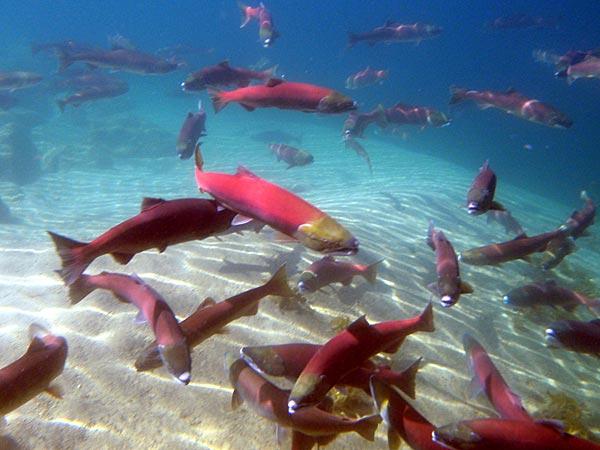 25 years ago in 1992, a mere four hearty Snake River sockeye salmon fought past hungry predators, including humans with nets, and eight dams along the 900-mile journey to spawn. Only one made it all the way back to Redfish Lake Creek, and he was dubbed, “Lonesome Larry” by the child of a hatchery technician.

Lonesome Larry struggled all the way back—only to find himself alone—just one year after his species had been listed as endangered. His solitary arrival punctuated the problem that had already been recognized, nearly too late. But it also called an unusual amount of attention at the national level to the problem, and poor Larry came to symbolize the cruel realities of the battles various wildlife species are forced to wage against the encroachment of humanity into their worlds.

Larry’s struggles also spurred a new wave of conservation efforts and a gene rescue program based in hatcheries. The hatchery-based activities have been developed and implemented since that time, with the ultimate long-term goal of transitioning away from hatcheries and into a habitat-based effort to allow natural population recovery. However, release strategies and the adult returns associated with the release of smolts are fraught with challenges and have not always been successful.

Pioneers crossing westward entered the Pacific Northwest and saw salmon in the Snake and Columbia rivers in droves. Silver streams of fish swimming against gravity seemed thick enough to allow humans to walk over them and across the river in those days, when 8 to 16 million salmon populated these rivers, moving down to the ocean to live several years, and then fighting back upstream to spawn and die.

Of those millions, it is estimated that Sockeye Salmon in the Snake River basin made up about 150,000. Around 25,000 to 35,000 of those returned to Idaho’s Sawtooth Valley, like Larry.

The once-massive Columbia watershed has been whittled down over the decades, though, and now 15 dams form a nearly impassable blockade to salmon with the instinct to move up the Snake River. These dams alone are enough to stop many fish, but they also form a perfect trap for predators waiting for salmon.

By the time Lonesome Larry came to Redfish Lake Creek, it was clear that only human intervention could counter the damage that had already been done to the Snake River Sockeye—recognized as an Evolutionarily Significant Unit, and filled with cultural importance for local people as well.

A team composed of experts from various agencies, including the Idaho Department of Fish and Game (IDFG), NOAA Fisheries, the Shoshone-Bannock Tribes, the US National Marine Fisheries Service (NMFS), and the Bonneville Power Administration (BPA) have worked together since 1991 to recover the Snake River Sockeye Salmon. In the short-term, their goal was to prevent the extinction of the species, and to protect whatever population heterozygosity and genetic diversity remained. In the long-term, their hope was to rebuild populations in a sustainable way, eventually delisting the fish and increasing their numbers until they were once more abundant enough to support harvest demand from local Native American tribes and sports fishers.

The Springfield Hatchery is one piece of the rebuilding puzzle. It was built in 2013 to protect the species and bring it back in greater numbers. This hatchery is critical to the expanding plan because of its capacity; it was designed to add up to one million more sockeye for release into Redfish Lake Creek. “Fish have been spawned in hatchery settings since the early 1990s,” explains Dr. Jesse Trushenski, an IDFG fish health expert and fish pathologist supervisor. “The Eagle Fish Hatchery became the dedicated home to the captive broodstock, but we didn’t have a dedicated place to raise the fish they produced. Eggs and juvenile fish have been raised at the Oxbow and Sawtooth Hatcheries, but these facilities didn’t necessarily have the space to accommodate 1 million smolts per year, which was the target as the sockeye program ramped up. That’s why Springfield Hatchery was built—to be the dedicated home for rearing 1 million sockeye smolts annually.”

The team had experienced what seemed like success with this plan, at least until recently.

“Fish released in the past from the other facilities performed in line with typical expectations for released fish,” comments Trushenski. “Not all smolts make the journey to the ocean—that’s true of sockeye and other anadromous fish, hatchery fish, and natural/wild fish. It’s a long, difficult journey, and not all of them make it, but in the past the hatchery-reared sockeye have done about as well as other stocks.”

However, this year biologists from the IDFG discovered there was a problem: smolts released from the hatchery were dying in droves.

If you’ve ever kept a fish tank, you may already know that fish are very sensitive to water chemistry. However, it’s not easy to predict how the water conditions that are present in wilderness situations will work for fish. Any alterations to temperature, dissolved oxygen, pH, salinity, suspended sediment concentrations and turbidity, and nutrient and pollutant loading can affect salmon of any age, and smolts are even more sensitive than adult salmon.

Water hardness refers to the amount of dissolved minerals, such as magnesium and calcium, in the water. Harder water contains high levels of these dissolved minerals. Waterways that originate from groundwater sources are often harder, since the water traverses rocks in the Earth, picking up minerals as it moves. In contrast, waterways that receive large amounts of rainfall can sometimes be softer. A salmon is released in the wild. (Credit: Idaho Department of Fish and Game.)

In the case at hand, the water at the hatchery is hard, while the water in Redfish Lake Creek is unusually soft. Trushenski and her team discovered that stress caused by the shock of going from the very hard water to the unusually soft water was killing the smolts. The water quality experts who were hired to evaluate the hatchery did not highlight this issue, but that’s not surprising to Trushenski, for several reasons.

Much of the issue here is that hatcheries are “absolutely” much more complex than they might seem to an outsider; with so many moving parts that impact living creatures, things sometimes go wrong.

What comes next is the tougher question to answer.

“That’s what we’re working through now,” Trushenski explains. “Through a series of experiments, we identified that fish were able to make the transition if they were allowed to do so in a step-wise fashion, in other words, if they could transition from high to medium hardness, and then medium to low. The Salmon River is the water source for the Sawtooth Hatchery. Its hardness is about halfway in between Springfield’s and Redfish Lake Creek. By acclimating the Springfield fish for a week or two at Sawtooth, they seemed to handle the shift to very soft water much better. Based on those results, that’s how the majority of smolts are going to be released next Spring—Springfield to Sawtooth, then Sawtooth to Redfish Lake Creek. We think that’s an excellent short-term solution.” Meanwhile, Trushenski and the team are working to develop a more lasting solution to the problem.

“As for the long-term, we are experimenting with some water mixing and water softening options that would allow us to take fish directly from Springfield to Redfish Lake Creek—without the stop-over at Sawtooth—which would be much easier to manage logistically. So, we’ve identified the problem and a short-term solution, and we’re continuing to refine options for a long-term fix.”

Some voices in the community are critical of the entire hatchery-based program and have called instead for breaching some of the dams in the river so salmon can pass unimpeded. Trushenski simply points out that the plan they are executing now is far from haphazard:

“I will say that I trust the science and the expertise of the many, many knowledgeable people that were involved in shaping and implementing the current recovery plan.”

Moreover, water softness is not the only challenge the species is facing. High temperatures in 2015 killed most of the salmon in the reservoirs. Some believe rising temperatures overall are related to climate change, which is fueling a debate about what to do next. However, Trushenski points to the practical issue for the salmon: whatever the cause of the high temperatures, they are dangerous for the fish.

“Climate scientists will be sure to tell you that it’s about long-term trends, not one particular season or year—I don’t think you can attribute any one event or year to climate change,” Trushenski points out. “But it is safe to say that the conditions experienced in 2015 were certainly not good for salmon.”

Nevertheless, Dr. Trushenski has confidence in the ability of the team to help the smolts acclimate gradually given the right settings, coupled with their careful monitoring and testing protocols.

“We are confident we can make this work,” Trushenski remarks. “Acclimation to differences in water chemistry is something that is regularly handled elsewhere. It’s just a matter of finding the right approach—something that works biologically for the fish and logistically at the scale we are dealing with.”