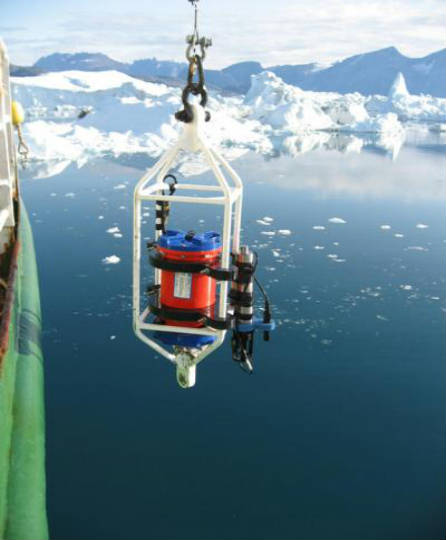 Sub-surface instruments being deployed in the North Atlantic provide continuous measurements of surface-to-bottom water temperature, salinity, and velocities in areas of the subpolar ocean that historically have been under-sampled. (Credit: Courtesy of Woods Hole Oceanographic Institution)

Most of us are aware that the oceans of the world play a tremendously important role in both the regulation of the global climate and the uptake of atmospheric carbon. However, one might be forgiven for being less aware of the amazing complexity of the meridional overturning circulation (MOC) of the world’s oceans. Scientists around the world are still learning about these drivers of our global climate system.

The AMOC, that portion of the MOC in the Atlantic, is critical to average climate worldwide. Characterized by fluctuations from north to south and back again, warmer waters move northward on the globe, allowing deeper, colder waters to circulate toward more central areas. These movements keep Western European countries more hospitably warm than they otherwise might be, and even trigger rains over Brazil and India.

As you might guess, however, too much warm water flowing north can contribute to mass loss from the Greenland Ice Sheet and declining Arctic sea ice. This alone has important ramifications for climate change, but that’s just the beginning. The North Atlantic is also responsible for approximately 40% of the average CO2 flux from air to sea every year, with almost half of that action taking place north of 50°N. This importance in uptake of carbon means that understanding the North Atlantic and its currents is essential.

New data provided by a sensor array spanning the North Atlantic is giving scientists some answers—and even more questions. The picture these sensors are painting reveals a more complex system that previously imagined as the experts get to work processing the first results and prepare to learn from the next round.

The Overturning in the Subpolar North Atlantic Program (OSNAP)

53 sensor- and instrument-laden moorings comprise the Overturning in the Subpolar North Atlantic Program, or OSNAP. Each point on the OSNAP chain measures water conditions, such as current speeds, salinity, and temperature, and autonomous vehicles called gliders as well as sensors that drift with the currents are also part of the OSNAP network. This configuration allows for an “ebb and flow” effect from the instruments. OSNAP itself targets portions of the Atlantic where surface waters moving north start to cool and fall deeper, turning south again. Thus, its moorings stretch from Scotland’s western coast to the southernmost point of Greenland, onward to southern Labrador in Canada. Vital questions scientists hope to answer by looking to these watery travel routes include whether a warming client slows the overturning of cold waters, and what is driving this kind of motion in the first place.

OSNAP was designed to work in tandem with another array spread between the Canary Islands and Florida: RAPID. The RAPID array has recently been showing very large changes in overturning in these warmer regions, but scientists think this is part of natural variability in the Earth’s climate, not a result of climate change. Still, only time will tell which patterns are connected to what, since natural fluctuations have the potential to be so significant. Since the currents being measured by OSNAP drive so many of the currents in the other regions of the world’s waters, understanding what OSNAP is telling us remains a high priority.

Duke University oceanographer Susan Lozier, who is coordinating OSNAP, shared the OSNAP team’s findings from late 2014 to 2016 recently. Lozier corresponded with EM about the program and the findings.

“OSNAP instrumentation was first deployed in the summer of 2014,” Lozier explains. “In the summer of 2016, we ‘turned around our moorings’, meaning that we recovered the data on the instruments and then redeployed them. So although the observing system is still in the water, we have a two-year record to now analyze.” The team discovered that on average, AMOC transports about 15.3 million cubic meters of water per second, and that its strength varies with the seasons and with winds. The team was pleased with the data they gathered, and although they saw more complexity and variability than they had predicted, they were easily able to place this in context.

“Because the ocean is so vast, it has always been difficult for ships to cover the territory needed to understand ocean circulation,” remarks Lozier. “Today, however, with autonomous floats and gliders, more and more of the ocean is being sampled. Keep in mind that satellites give global coverage of the surface ocean only, yet to understand the ocean circulation and, importantly, its role in climate, we need to understand the currents and properties at depth. Also, the ocean has been difficult to measure because of the high pressures and highly corrosive environment that instrumentation must withstand.”

Ultimately, Lozier and the team hope to parse out just how much each relevant factor controls ocean currents and drives overturning. More answers will present themselves over time, as the researchers gather data through colder and warmer winters and establish more norms and exceptions.

“The OSNAP observing system, funded in the US by NSF, will remain in the water at least through 2020,” details Lozier. “We will, with our international partners, seek funding for the continuation of OSNAP past that date. We are researching ways to create a more efficient observing system and will be working with modelers on this task.”

The program itself is a model of scientific success, and not just because of the essential data it is generating.

“OSNAP is a great example of how the international ocean community works together,” Lozier adds. “Seven nations contribute intellectually and financially to OSNAP. There are not many borders in the ocean!”