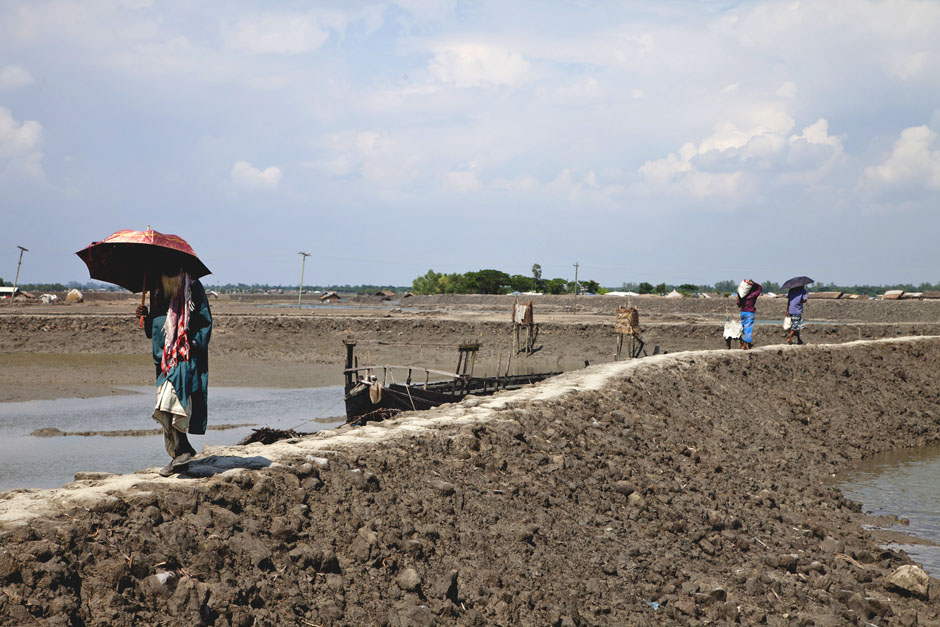 A better understanding of delta migration rates will aid locals, such as these Bangladeshis pictured walking along a channel embankment in rural Bangladesh, whose lives are directly impacted by changes to channel locations. (Credit: Andre Leroux)

When we think of a river’s movements, we often think of its current. But rivers move in other ways too, ways that can have profound consequences to those living around them. If a river’s centerline shifts, especially if it shifts a lot, the impact can be huge, and devastating to human populations that depend on the river as a place to fish, farm, and settle. The Ganges River in India, for example, supports 650 million people who have their homes, families, and livestock gathered at its banks. As the river changes in the future due to the impact of climate and anthropogenic factors, it is of critical importance for the population living by the Ganges—or any other major river–to know what the changes will be to best prepare for a potentially radically different future. Luckily, top scientists are already working on these issues and have created a solution to help populations cope with river changes: the first global river migration database.

Paola Passalacqua, an associate professor in the Department of Civil, Architectural, and Environmental Engineering at the University of Texas, and Teresa Jarriel, a post-doctoral researcher in the same department and university, teamed up to create the first global river migration database. This database is an open-access source that scientists and managers can use to predict the impact of river centerline movements on all human populations who call areas by rivers their homes. 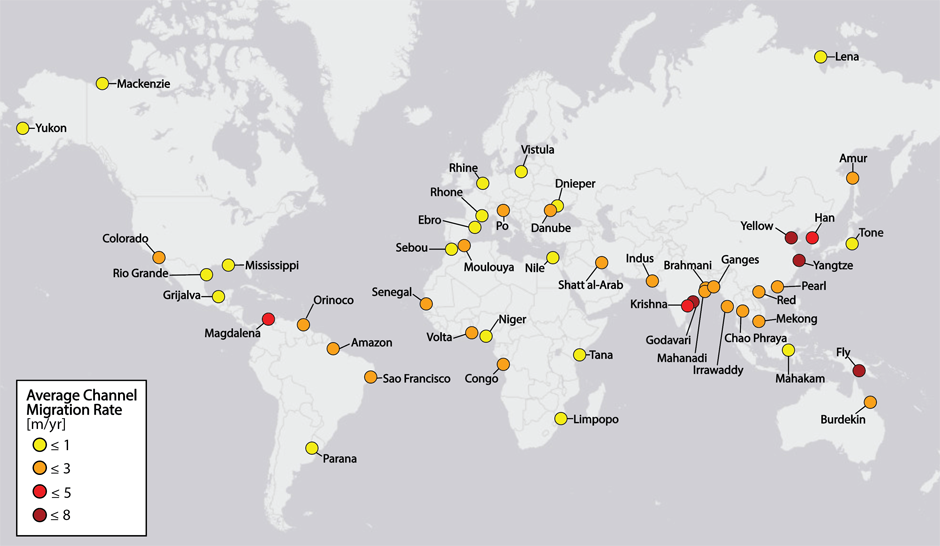 Simplified version of the PNAS paper figure showing the locations and average migration rates for each of the 48 river deltas of the study. (Credit: Teresa Jarriel)

Passalacqua recalls, “Both of us came up with the idea of making a global river database that was open access. We were originally working with data from the Ganges, but we realized if we expanded that into multiple systems, into 48 major rivers across the globe, that would have more meaning and impact for people all over the world.”

In terms of what the global river database involves, Jarriel explains that the input data is Landsat images. Open source code linked in their research paper allows scientists and managers to utilize the data. A tutorial is also available for those who aren’t familiar with Python so they can use the open-source code, too.

Creating the first global river database was no small task. “There were many challenges. Years of work went into our paper. One of the challenges we had to overcome was to make an algorithm that is able to detect rivers, flat areas, and boundaries between land and water,” said Passalacqua. “Our human eyes are trained to distinguish river and land, but it is hard to teach an algorithm to do that.” Jarriel added, “Another challenge we had was isolating meaningful changes in the river in our satellite images.  For instance, images have to come from the same time of year to correctly compare them, otherwise seasonal image differences appear. We also made sure to pick images without clouds, since the instrumentation can’t penetrate the clouds. We chose dry season imagery to minimize cloud cover.” 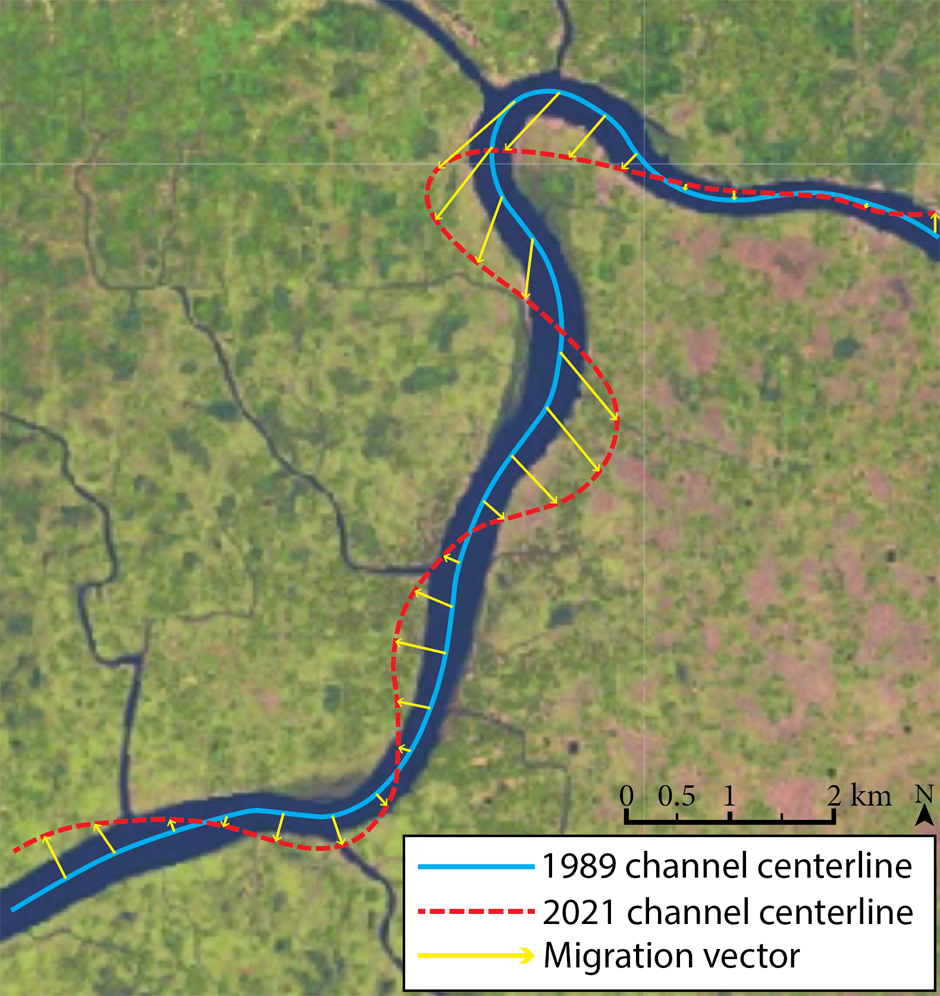 Channel centerline migration of the Sandha River (Bangladesh) from 1989 to 2021. (Credit: Teresa Jarriel)

Passalacqua and Jarriel found that river centerline movements can vary a lot. While some areas on the Ganges, for example, can undergo a large migration of a couple of kilometers over 35 years, in other places, the centerline barely moves. For reference, centerline movement of 30 meters per year could potentially displace a village.

Jarriel added, “Deltas also go through pulses of movement, so we may have too few years of data to reflect movement of river centerlines on a larger timescale. The channels may go through migration cycles that are hundreds or thousands of years long.”

While climate change is expected to impact river centerline movements, Passalacqua and Jarriel found that anthropogenic effects may be just as large or larger. Looking at the past 30 years of data, the influence of humans on rivers was clear: people putting up walls and embankments changed the natural sediment flow and had a significant impact on surrounding areas. “People want to live by the coasts,” says Jarriel. “They won’t be dissuaded. So it’s best to think of the optimal ways of managing that.” Says Passalacqua, “You first need data on the situation before you can decide how to approach it. That is what our global database provides for managers.” 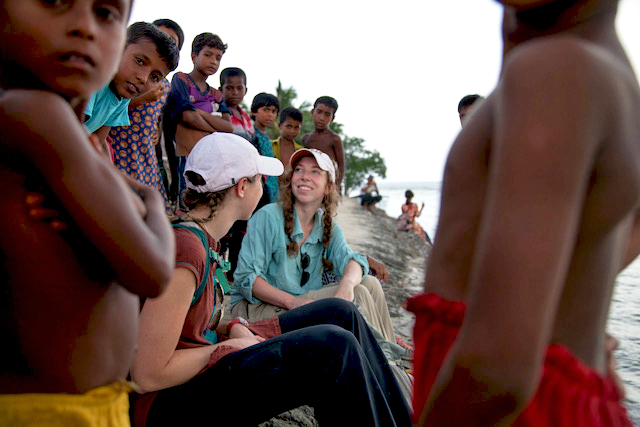 Teresa and some local children in a Bangladesh village. (Credit: Andre Leroux)

Overall, Passalacqua and Jarriel are pleased with the global river database and feel they have accomplished their major goals. Says Passalacqua, “We were able to overcome some difficult technical challenges to set up the machine learning. Also, we didn’t just succeed in doing science, we succeeded in doing practical science that researchers and managers can actually use. In research, you are concerned with the technical accomplishments of science but you also hope to produce useful science. Our global rivers database does both.”