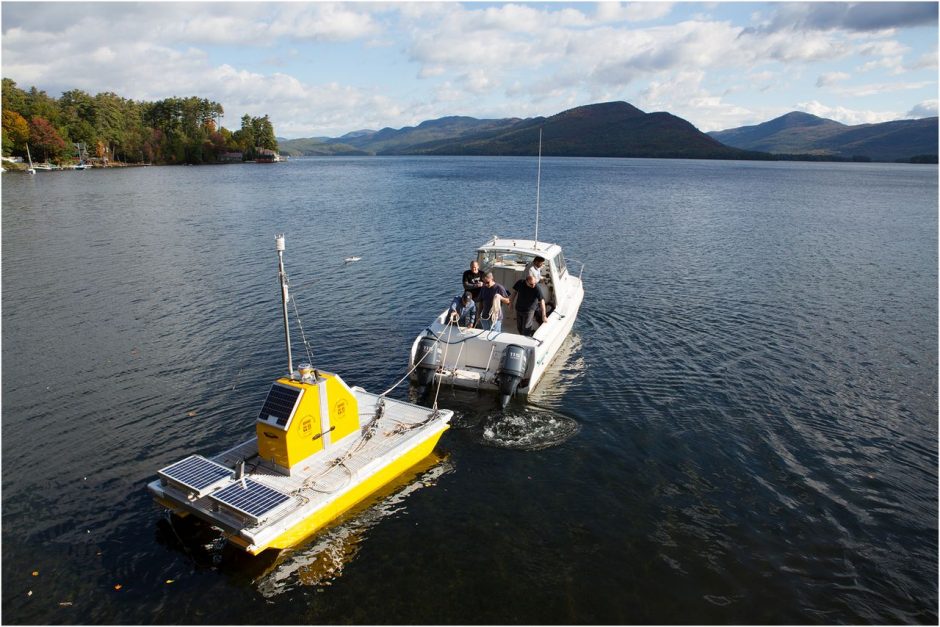 Thomas Jefferson was, among other things, an avid naturalist. During the years of his life, especially in the nascent country he eventually helped govern as the third President of the United States, the sciences were most often pursued through their connections to architecture, agriculture, invention, and practical engineering, and Jefferson was thrilled by all of these subjects. One of the highlights of his time in office was his meeting with Alexander von Humboldt, one of the greatest scientific minds of their time, in 1801. Jefferson made a tremendous impression upon Humboldt, a man who would eventually be credited with providing the foundations for the way we now perceive the natural world (see, for a discussion on Humboldt’s work and his meeting with Jefferson, Wulf 2015).

It shouldn’t be surprising, then, that Jefferson was among the first Americans to engage in travel and tourism for taking in natural beauty. He had the means to travel and the interest in the natural world to appreciate what he saw, and it was Jefferson who wrote to his daughter to describe Lake George in New York as the “most beautiful water” he had ever seen. This was in 1791, nearly two centuries before modern study identified an urgent need to restore the lake and bodies of water like it—a movement that has transformed Lake George into one of the world’s “smartest” lakes as part of a project named for Jefferson.

The Jefferson Project was begun as a collaborative effort between researchers at Rensselaer Polytechnic Institute (RPI), IBM, and the FUND for Lake George in Troy, NY in 2013. The team has gradually transformed Lake George into what is arguably the world’s smartest lake, equipped with a tremendous range of sensors and equipment that collect more data points every week than researchers had been able to gather in the 30 years prior to the project’s beginning. Project leader Rick Relyea corresponded with EM about the endeavor.

“The Jefferson Project (JP) was inspired by a 30-year study of Lake George by our Rensselaer biologists who documented that the lake was experiencing declining water quality over the decades,” Relyea begins.

Since about 1980, RPI researchers have used various hand-held water meters on Lake George to track water quality in the lake. About every two weeks, the team would measure the chemical and physical properties of the lake water, and return samples to the lab. Of course this wasn’t possible in winter, so gaps in data for dissolved oxygen, pH, and other properties would pop up depending on the weather. The researchers also made use of a single tributary station and one weather station to provide additional data on factors like stream depth, flow, and wind speed. Jefferson project researchers deploy an Acoustic Doppler Current Profiler through the ice to track the direction and speed of the water current. (Credit: Rensselaer Polytechnic Institute)

Over time it became clear that Jefferson’s most beautiful water was in decline, and the JP was born. Thanks to the project, it is rarely necessary for the researchers to take measurements by hand. In fact, the JP and its collection of sensors and custom-designed models has placed Lake George under a level of research supervision unlike anything else.

A collaborative effort, the JP is a joint effort between RPI, and partners IBM and the FUND for Lake George. One of the unique features of this project is the partnership between the stakeholders.

“The power of this pioneering project is in applying world-leading science for the enduring protection of a world-class natural treasure, Lake George. It is a legacy of legacies, a bright beacon for securing the fate of fresh waters anywhere,” said Eric Siy, Executive Director of The Fund for Lake George. “This is a momentous role befitting the Queen of American Lakes.”

“This is an unprecedented collaboration between a major university, a major corporation, and an important lake advocacy group,” remarks Relyea. “Each partner brings unique strengths to the partnership, resulting in a synergy of efforts that would not be possible by any partner alone.”

The JP launched in June of 2013. The project’s goal was to create a real-time, detailed view of the effects of environmental change, invasive species, and pollution on freshwater ecosystems. IBM has created four predictive models for the JP, to estimate inputs of road salt into the lake, predict the weather, track water circulation patterns in the lake, and predict water run-off from surrounding mountains. The massive amounts of data the instruments are collecting help them to fine tune them.

“The sensors are bringing in massive amounts of data from the lake, currently exceeding 220 million data points since 2014,” Relyea comments. “These data not only tell us how the lake is behaving over space and time, but they also feed into the computer models to help predict (and validate) the local weather, runoff, and lake circulation.”

Of course, it’s not all down to sensors and machines—at least not yet.

“There are many things that need to be measured for which there are no sensors, including many chemistry variables such as phosphorus and heavy metals, and all of the biota such as algae, plants, and animals,” describes Relyea. “These variables are collected in traditional ways.” Down to a science

To get a better sense of how exactly the JP works, it helps to know exactly what the network is monitoring, and how. The project itself began in summer of 2013, and the front end of the project involved careful planning and describing the lake itself.

“Bathometric surveys were primarily conducted in 2014,” Relyea explains. “This involves using boats and planes using sonar and LiDAR to map the 3-dimensional bottom of the lake in tremendous detail, to about 0.5-m resolution in the water. We also mapped the surrounding watershed in great detail, to about 2-m resolution.”

By the end of 2018, the sensor network will be complete; this means the 32-mile long body of water will be monitored by 41 sensor platforms.

“The Smart Sensor Network is now 95% deployed with the remaining 5% being deployed this spring,” details Relyea. “This includes 14 weather stations, 10 stream stations, 11 ADCPs, and five vertical profilers, which collect data from the surface all the way down to the lake bottom; deployed in the deepest areas of the lake. We have also deployed dozens of other additional, more specialized sensors, including dissolved oxygen catalogers and CTD (conductivity/temperature/depth) sensors.”

The project’s vertical profilers and tributary stations measure the physical and chemical properties of water at many different depths. For the speed and direction of currents, ADCPs (Acoustic Doppler Current Profilers) measure in three dimensions.

“To track how the lake circulates, we use sensors called ADCPs,” Relyea remarks. “These sensors are most commonly deployed on the lake bottom at multiple locations and they are pointed up toward the lake surface. They function by detecting the movement of particles (such as plankton) in the water. In doing so, we can determine the direction and speed of water movement in each meter of the water column from the bottom to the top.”

“These ADCPs are near the surface and point downward, but they function the same way,” clarifies Relyea. “However, the path of the boat allows us to collect lake circulation data over a larger spatial area.”

Every lake ecosystem is a little different and may present unique problems to solve, but this project is hopefully going to provide insights into conservation efforts that can be used all over the world.

“Although all lakes are unique, they all share the same threats including excess nutrients, pollutants such as pesticides or road salt, invasive species, human development, and global climate change,” Relyea states. “By developing advanced science and technology to effectively monitor, model, and mitigate such impacts on Lake George, we hope to serve as a blueprint for how to do similar work in lakes around the world.”

This ambitious goal is aided by the advanced level of the JP’s technology—some of which was actually invented for it.

“Our engineers at Rensselaer—in collaboration with engineers at IBM—have developed a new generation of vertical profilers with increased functionality that is not available from existing manufacturers,” Relyea details. “We have also built multiple generations of computer boards that allow us to add intelligence to over-the-counter sensors that are purchased from sensor companies. Finally, we are in the midst of developing real-time, reagentless phosphorus sensors using advanced materials that could end up being major game changers for people who need to monitor phosphorus in water bodies around the world.”

The project is already providing important information to researchers, despite the fact that it has yet to be fully deployed.

“From 2015-2017, we completed more than 50 mesocosm experiments to understand how a range of human impacts affect lake ecosystems and overall water quality,” Relyea remarks. “These experiments have included manipulations of excess nutrients, invasive species, global warming, and pollution by road salt and road salt alternatives. The power of the mesocosm approach is that we can examine each impact alone and in combination with many other human impacts.”

Through 2009, metrics indicated that salinity was on the rise thanks to road salt use over the preceding 30 years. And although road salt as a pollutant is well-known to researchers, it is studied only infrequently. This prompted the team to research how road salt affects zooplankton (Daphnia pulex) and larger organisms that rely on it for food, such as Lithobates sylvaticus, a species known more commonly as wood frogs.

The team studied the phenomenon by placing tadpoles in tanks with concentrations of sodium chloride similar to those of waterways near roads treated with road salt. The researchers were surprised to learn that road salt caused a change of sex, from female to male, in tadpoles—the opposite of the feminization effect sometimes seen as pharmaceutical pollutants affect waterways. The team believes this may mean that overly high salinity can decrease the frog population as salt molecules mimic testosterone, causing the masculinization of tadpoles.

In contrast, in a separate experiment, the team found that zooplankton can evolve tolerance to road salt in about 2.5 months, approximately 5 to 10 generations.

“A large number of these studies are now published with some really interesting results,” Relyea offers. “For example, we have discovered that high amounts of road salt can cause declines in zooplankton, which then allows the floating algae (phytoplankton) to increase dramatically, resulting in a much greener, less transparent lake. This would be exacerbated if the high salt conditions were to coincide with excess nutrients coming into the lake from farm runoff or outdated septic systems around a lake.”

JP researchers are also exploring which conditions might favor—or hinder—invasive species, and trying to tease out the long-term effects of road salt alternatives. Many other avenues of research will open up over time, as researchers hone in on the project’s real power.

“In my view the most interesting technical advances are the ability to give intelligence (including data analytics) to the sensors for smart, adaptive sampling of the environment and the creation of high-resolution computer models that are coupled together,” emphasizes Relyea. “These are abilities that freshwater researchers dream about to better understand lakes and their surrounding watersheds, but until now has not been technically possible.”

The full range of what this project will be able to produce over time isn’t yet clear, but the uniqueness of the project’s deployment of new sensor and modeling technology paired with traditional monitoring and experimental efforts to monitor, model, and mitigate human impacts on freshwater ecosystems is. And, as Relyea points out, all of these efforts are informing potential solutions that the FUND for Lake George is using to ensure the lasting protection of the lake.

“Teddy Roosevelt famously referred to the economy and environment as ‘opposite sides of the same coin.’ The still pure, yet seriously threatened, water of Lake George, is our common currency—the lifeblood of the economy, and living heart of our communities,” said Siy. “The Jefferson Project will ensure its accruing value for generations to come; quite literally history in the making.”