Snowmelt, Stormwater and Contamination in Saskatoon 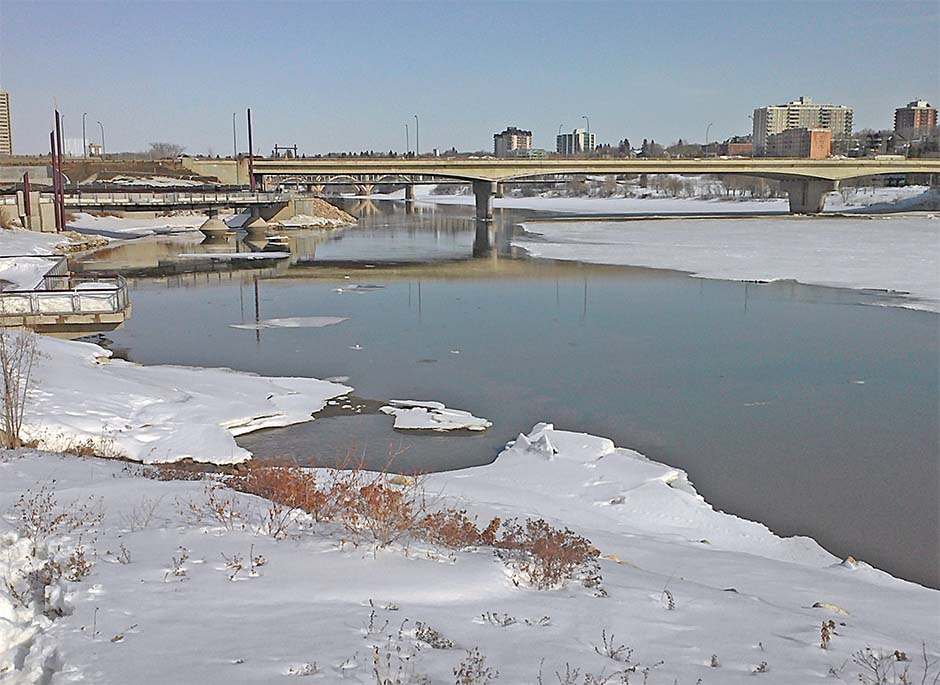 In Saskatoon, Saskatchewan, pollution and runoff from storms and snowmelt are getting the close look they deserve, and there’s much more to examine.

Weather, from heavy spring storms to long months of snow and freezing temperatures, makes the polluting potential of runoff and snowmelt greater than and different from warmer climate cities, said Garry Codling in an email. In Saskatoon, potentially harmful elements in runoff can exceed the guidelines for runoff set by the Canadian government.

Saskatoon has a semi-arid climate, where contaminants like PFAS and metals have long periods of time to build up before being washed off into the South Saskatchewan River, which runs through the middle of the city.

During the summer, lengthy dry periods allow dust, particulate matter and black carbon to settle on the surface of the city: streets, sidewalks and green spaces. As the ground dries out, it becomes less able to absorb water, especially when it comes all at once, like in a summer thunderstorm. Much of what settles on city surfaces, like black carbon can collect other contaminants, which run into storm drains and, eventually, the river.

Even fine particulates (PM<10), which are more likely to migrate in the summer, usually only migrate locally and will stay within the watershed, Codling said. 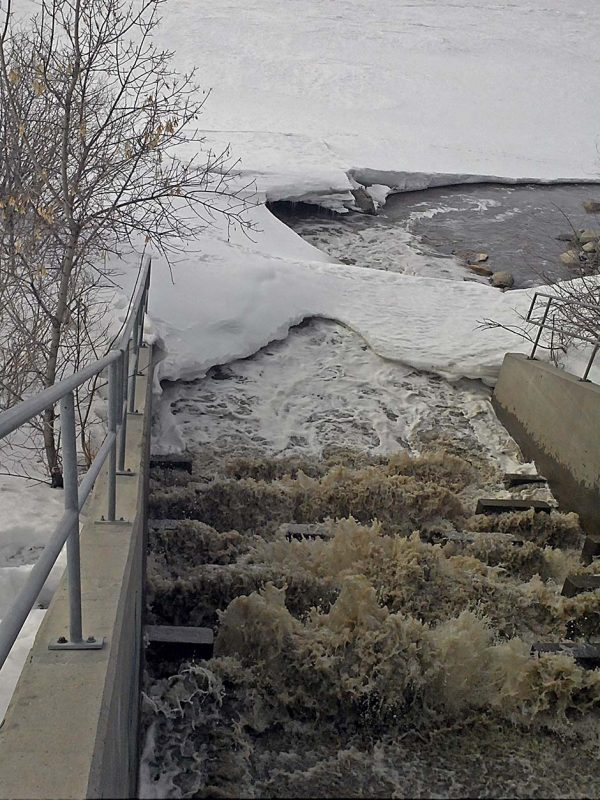 In Saskatoon, winter lasts a minimum of 100 days, during which snow accumulates and collects contaminants “like a sponge,” Codling said.

Through those 100 days, even contaminants that exist in the air in low concentrations have the potential to collect in the snow in greater amounts. These contaminants could come from any number of sources, from near or far.When the snow melts, usually before the ground is thawed and permeable, it flows into the South Saskatchewan River, carrying with it months of contaminant build-up. Click To Tweet

“Basically any atmospheric gas compound from industry or vehicles could potentially build up in the snow. In addition, particles like black carbon that can come from things like diesel vehicles will be trapped in the snow,” Codling said. “What all this means in basic terms is the snow potentially will collect lots of potentially harmful chemicals over the winter.”

On top of this long term collection, chemicals that would, in warmer temperatures, be found in the air, remain stuck in the snow or attached to other particles like black carbon.

Come spring, these chemicals that are collected over the winter are released in one major melting event.

Saskatoon’s 100-day winter usually ends in April (Codling says rain before March “was unheard of until recent years”). When the snow melts, usually before the ground is thawed and permeable, it flows into the South Saskatchewan River, carrying with it months of contaminant build-up.

Codling’s rough estimate is that spring snowmelt in Saskatoon is close to the amount of water that runs over Niagara Falls in 2.5 to 3 days.

Whether summer or winter, the runoff regime in Saskatoon is marked by long periods of little runoff, where contaminants can build up, and relatively short-lived, but heavy runoff periods during snowmelt or summer storms.

While there is little question over whether or not these runoff events introduce contamination into the river, it is harder to say what effects contamination could have on the health of humans or aquatic life. Cities and rivers are too complex to find easy answers.

The research team looked for 17 PFAS and a group of 24 potentially hazardous elements in the runoff. 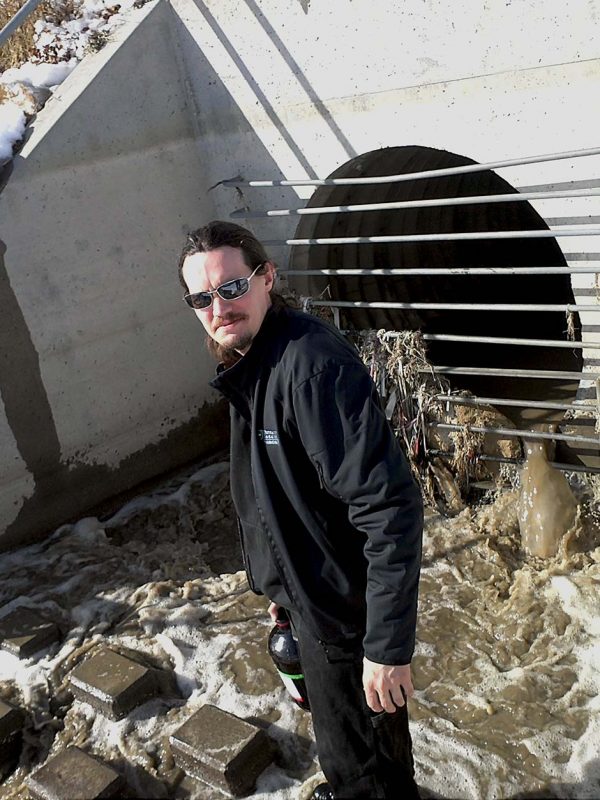 PFAS levels in the runoff were below toxicity thresholds for aquatic invertebrates and fish, a surprising finding, Codling said. He expected PFAS concentrations to be higher.

The average PFAS concentration across snowmelt and spring and summer storm runoff was 9.0 ng/L-1. Other Canadian cities average 6.6-16 ng/L-1, so these findings were in line with averages nationwide.

PFAS levels may have been lower than he expected because sample sites were not near traditional PFAS sources, like airports or dumps, Codling said.

On the other hand, several of the potentially harmful elements monitored exceeded discharge values set by the Canadian government. The study reports that manganese with chromium, copper, zinc, barium and uranium all exceeded those thresholds.

While this runoff doesn’t pose an issue for Saskatoon (it gets its drinking water upstream of the city), it could pose problems for city water systems downstream.

Identifying any effect from Saskatoon runoff would be difficult, though, Codling said.

For one thing, runoff is diluted as it joins the river and even more so as it flows downstream to the next municipal water system. It would be like “looking for a needle in a haystack to detect the impact of Saskatoon on other cities drinking water,” Codling said.

But, even as single contaminants are diluted to well below safety standards, the cumulative effect of multiple contaminants has the potential to cause health problems.

“Some of the tests done on concentrated stormwater did indicate that the total mixture could have endocrine-disrupting potential,” Codling said.

Despite the findings of this study, there is much more to learn about contaminants in city runoff, Codling said.

For one, there are far more contaminants to study than the 17 PFAS and 24 potentially harmful elements.

Further, municipal stormwater management is difficult to control and stormwater can’t be treated like wastewater. Because of this, cities should work to identify contamination hotspots and focus on these, Codling said.

To answer questions concerning potential harm runoff does to rivers, aquatic life or downstream human populations, monitoring is needed at more places within and downstream from the city. And, since growing cities, like Saskatoon, are adding to their stormwater infrastructure, maintaining a clear picture of runoff and the contamination it carries is a large task indeed.

A joint project led by University of Saskatchewan professor Markus Brinkman and the city of Saskatoon’s stormwater utility, wastewater treatment and watershed protection units was announced earlier this year. They aim to get a better idea of the quality of stormwater flowing from Saskatoon into the South Saskatchewan River.