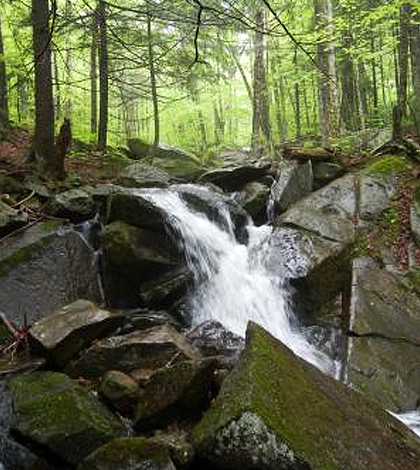 As an investigation by scientists at Duke University and the Cary Institute of Ecosystem Studies shows, the value of long-term studies can’t be understated. In it, investigators looking at the impacts of acid rain on the soil acidity of a New Hampshire forest found that everything behaved as expected for about a decade. But after that, the system went haywire.

At the outset, scientists knew that acidified soils were having impacts on the growth rates of trees in the northeastern United States. Their investigation in the Hubbard Brook Experimental Forest was to evaluate the effectiveness of adding calcium as a mitigation method.

In 1999, researchers added 2,600 pounds of Wollastonite pellets made of calcium silicate to a 30-acre forested watershed within the experimental forest. Levels of calcium in the forest’s soils had already been depleted due to acid rain, so investigators hoped that putting some calcium back would help to bring back tree growth.

This worked out for around a decade, according to data they collected on soil pH and other indicators that showed soils and streams in the forest had regained some of their acid-neutralizing abilities. A dominant species of canopy trees with high calcium needs, sugar maples, also began to come back.

During this period, it appeared that predictions of soil recovery were correct. The calcium was largely retained and the forest was growing. But then, in 2010, investigators noticed that streams draining from the treated site had elevated nitrogen levels. Three years later, the annual inorganic nitrogen losses were thirty times what were expected. Such increases are typically only seen following clear-cutting. What’s odd about that is that growing forests typically act as nitrogen sinks, with trees retaining nitrogen in their biomass. But a decade after the calcium was added, the treated site did the opposite — it acted as a nitrogen source and leaked high levels of inorganic nitrogen into nearby streams, even though atmospheric nitrogen pollution was declining and trees were not being cut down.

“The discovery that CaSiO3 (calcium silicate) enrichment can convert a watershed from a sink to a source of N (nitrogen) suggests that numerous potential mechanisms drive watershed N dynamics and provides new insights into the influence of acid deposition mitigation strategies for both carbon cycling and watershed N export,” study authors write in an article discussing the investigation in Proceedings of the National Academy of Sciences.

The researchers suspect that when the calcium addition lowered the acidity of forest soils, it also enhanced the way soil organic matter was being processed microbially. This probably released nitrogen that was storied in the forest floor.

Other researchers at Hubbard Brook have been studying the forest floor and have found that soils in the treated watershed have decreased amounts of organic matter. Still, the exact mechanisms leading to the nitrogen losses remains unclear.

Since major, unanticipated impacts of the mitigation experiment took a decade to emerge, scientists say that it proves the usefulness of long-term, comprehensive research to advancing understanding. The ability to track the area over time shed new insights into watershed dynamics — it also underscores that preventing environmental degradation in the first place is often easier than fixing the damage it causes.