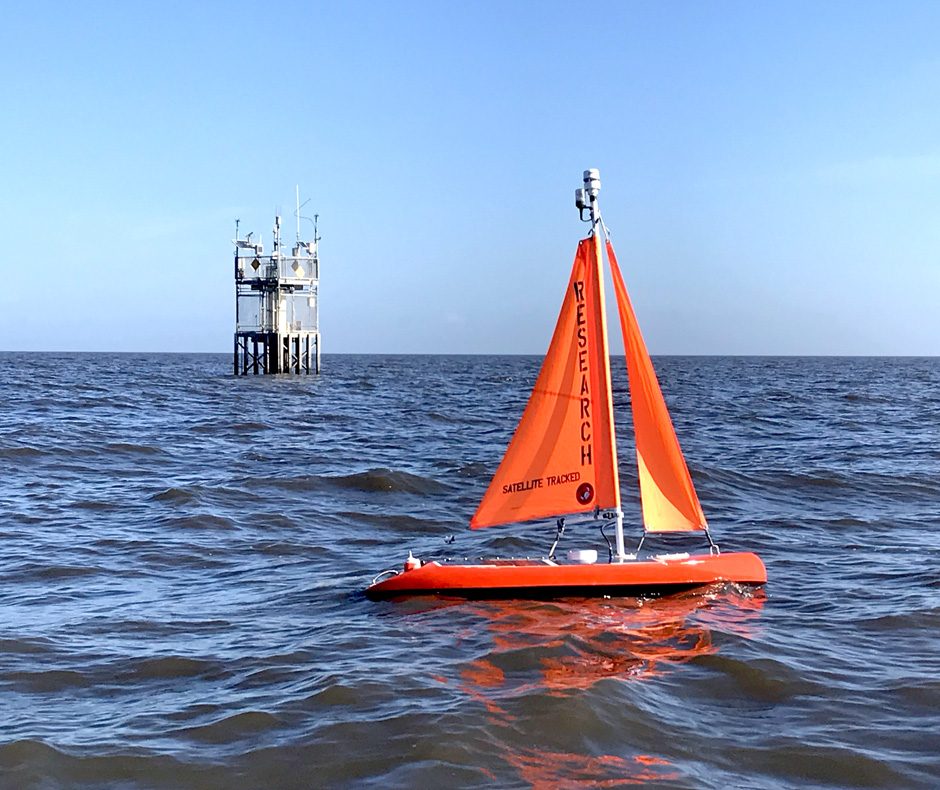 Time is of the essence when it comes to tracking algal blooms, and people everywhere are looking for solutions. In Florida, scientists from Florida Atlantic University Harbor Branch Oceanographic Institute (HBOI) recently trialed a solar-powered, algae-tracking sail boat developed by Navocean, Inc. Dr. Jordon Beckler of Florida Atlantic University (FAU) directs HBOI’s Geochemistry and Geochemical Sensing Lab and spoke to EM about the trials and the boat.

“This boat is so amazing when you see it in action,” remarks Dr. Beckler. “Navocean originally contacted me a few years back about a demonstration when I was over at my previous institution in West Florida, and we brainstormed some scenarios for employing the boat for harmful algae bloom monitoring. We tested it last December (2017), finally, after a year or two of discussions, planning, and implementation of an appropriate boat and sensor package for harmful algae bloom monitoring.”

The team sent the boat out in December of 2018 offshore of Sanibel, Florida. The deployment purposely coincided with the beginning of the intense Florida Red Tide Bloom (Karenia brevis) that ended in February of 2019.

“It did an excellent job surveying the bloom offshore,” explains Dr. Beckler. “It traveled probably one-third of the coast of West Florida over the course of three deployments. It demonstrated that it was useful in near-shore and coastal areas, and we have a paper in press in Frontiers of Marine Science where we discuss that.”

Then Dr. Beckler switched institutes and is now on the east coast of Florida. 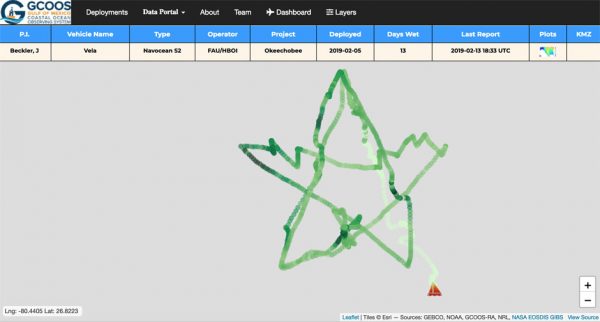 “I’m now working on the Indian River Lagoon, and we have really bad inshore algae blooms here,” details Dr. Beckler. “Of course, they’re connected to Lake Okeechobee. If you ask me, this vessel is a perfect platform for lake algal bloom monitoring or inshore Indian River Lagoon monitoring. Most other autonomous ocean-going vehicles are too large and draw too much water to work in an inshore environment, and are not really deployable by one person from the beach like this boat is. This boat is only 2m in length and weighs a little over 100lbs.”

“You can deploy it with a single person, and it is pretty affordable, even when outfitted with some algae sensors,” Dr. Beckler describes. “We crowdsourced funds for the trials with the most recent model we used on Lake Okeechobee. During the deployment, anybody could go to the Gulf of Mexico Coastal Ocean Observing System (https://gandalf.gcoos.org/portal) and actually track the boat and its data stream. GCOOS is interested in this work because most Lake Okeechobee water eventually ends up in the Gulf of Mexico.”

The target users of this kind of boat might vary but would include anyone interested in real-time data from remote locations.

“Research scientists, water quality monitoring folks, such as those studying Lake Erie algae blooms,” comments Dr. Beckler. “We’re trying to make this system turnkey so that people can simply send the boat out and keep surveying a series of waypoints for weeks, or even months at a time and get real-time data on chlorophyll, at least from a fluorescent sensor.”

Once calibrated, the boat can be deployed for extended periods of time, in part because it has a solar power source, and in part, because it is easy to calibrate and stays true.

“It is a quick field calibration,” Dr. Beckler states. “We use a tinted sheet of frosted purple plexiglass material which makes for a solid fluorescent reference signal if held up against a fluorometer at a set distance. We take a single point measurement of the fluorometer that we can use for recalibration, or to check that it is still functional after it has been deployed for awhile. We did it before and after the most recent Lake Okeechobee bloom and the numbers were within five percent. The fluorometer was stable, even in a really nasty water environment.” 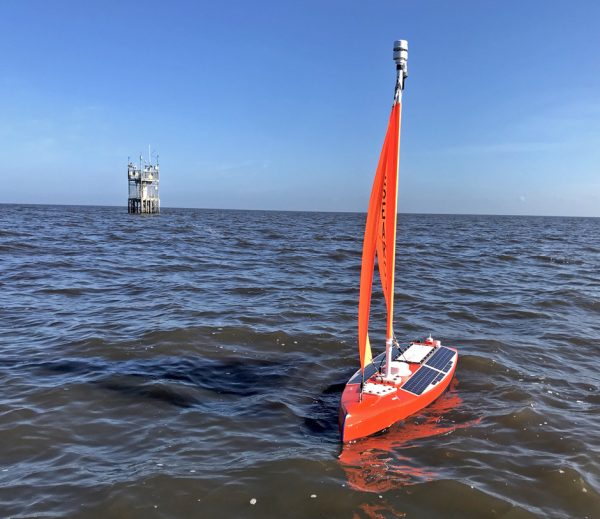 Customizability is another advantage to the platform.

“The boat can pretty much accept any sensor that you want to put on it, and if it’s a sensor that’s collecting data and storing the data on its own, that’s even easier,” Dr. Beckler says. “They also have the means to connect sensors that are spitting out serial data or analog data to a little internal data brain so that it could forward the information in real time. It is already linked up in real time to collect data from a Turner Fluorometer.”

Depending on where the boat is deployed, the parameters it is monitoring might change slightly.

“It’s detecting when the bloom first emerges, and that is just chlorophyll,” remarks Dr. Beckler. “You can use a Turner Fluorometer with 3 or even 6 channels; in our case, we had three: chlorophyll A, phycocyanin, and fDOM. We wanted to see the organics and the chlorophyll.”

When the team deployed the boat in Sanibel, they were measuring chlorophyll A, fDOM, and turbidity.

“The other sensor we used for Lake Okeechobee is a Wetlabs backscatter meter (BB3),” explains Dr. Beckler. “We had three channels of RGB backscatter to detect particulate material. Combined with the chlorophyll data, these sensors can potentially be used in tandem for resolving functional groups of phytoplankton, or at least provide clues about which groups may be present.”

Now, the team is deploying the boat in new ways—for example, customizing the boat to work alongside a NASA-funded project.

“The NASA SeaPRISM instrument on a platform in the southern half of Lake Okeechobee measures reflectance from the lake at various incident angles relative to the sun,” details Dr. Beckler. “We had the Navocean vehicle circle this stationary platform on Lake Okeechobee 24/7, 365. The vehicle provides in situ (in-water) measurements of backscatter that can be compared to those inferred by the SeaPRISM reflectance signal over time. We haven’t looked at the data yet, but by collecting the true, in-water data, the Navocean vehicle could potentially help improve the algorithms that the SeaPRISM uses to deconvolute the backscatter signal from that of overall reflectance. By surveying spatially at increasing distances from the SeaPRISM, we can also see just how variable the backscatter signal is, and thus how representative the SeaPRISM data is of a larger area.” Dr. Beckler describes. “We collected a significant amount of data this last deployment that is going to allow us to investigate that.” 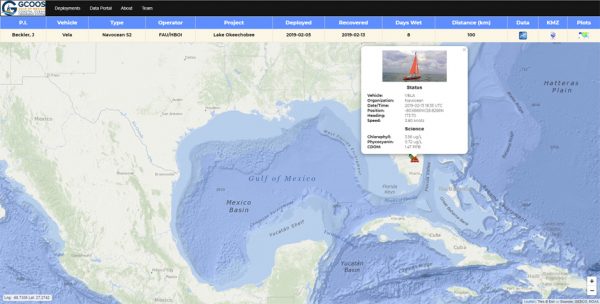 This kind of customizability means more new applications are on the horizon.

“The easiest things to customize are the channels on a fluorometer,” states Dr. Beckler. “They aren’t the most definitive instruments, meaning there will always be a question of signal interpretation, but they’re versatile with lots of sensor options. You can look at hydrocarbons, for instance, so now you can search around for oil slicks. There are many possibilities.”

The team seeks out natural extensions of what these fluorometers can do to find new ways to put the boat to work.

“We have also been working with Mote Marine Laboratory (Dr. Beckler’s former position) to integrate into the sailboat a Programmable Hyperspectral Seawater Scanner (PHySS) to measure colored-dissolved organic matter (CDOM) and optical signatures of Karenia brevis,” comments Dr. Beckler. “By using a long-pathlength spectrophotometer, spatial measurements of CDOM could be obtained even in the open ocean, yielding data useful for many biogeochemical applications and improving our understanding of light availability, photochemistry and biology, heat transfer, and trace metal availability. Direct detection of Karenia brevis (i.e., Florida Red Tide), instead of generic fluorometric chlorophyll-a, could allow us to locate red tide blooms and potentially mitigate them before they begin.”

Using the boat in this way isn’t just cost-effective. It’s an expression of the HBOI passion for sharing oceanography and marine science with the public.

Dr. Beckler said, “I am such a strong believer in the technology – how unique, versatile and automatic the boat is, and so easy to deploy.  All you really have to do once the boat is in the water is set waypoints. Of course, we are monitoring the boat continuously, but that is really only because we are performing tests. Realistically you can set a waypoint and the boat will get there by any means necessary – set it and forget it! The vessel is reliable and it worked so well. I am very happy with the results. Last but not least, the attention from the public both during the deployment with the crowds that it drew, as well as with the follow-up media. That is one of the other intangibles. To be able to excite the public about water quality is a really amazing asset.