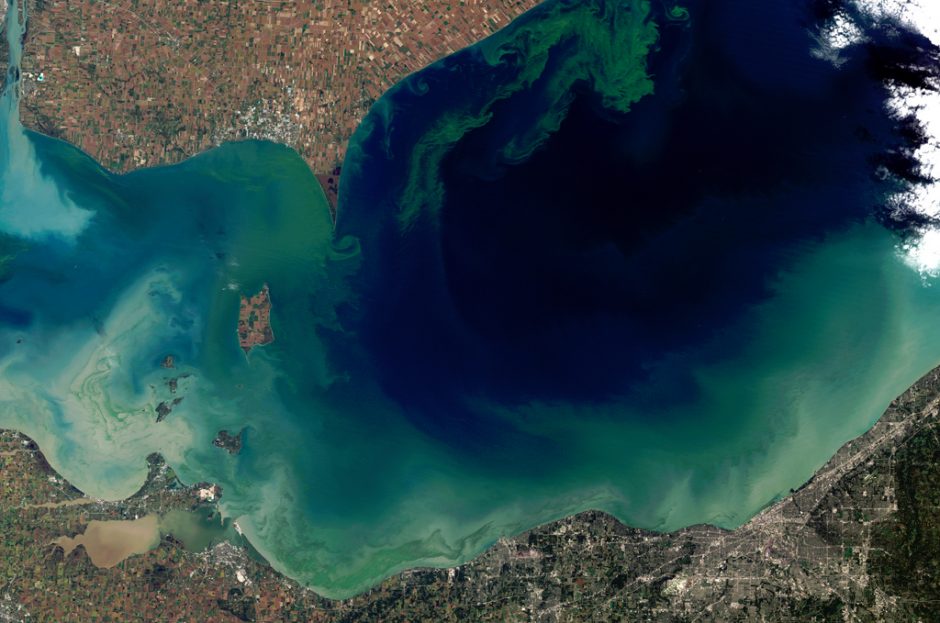 Though achieving the 40 percent reduction target for phosphorus going into western Lake Erie is a daunting task, the results of new modeling research has found that getting there is possible. But it’s not going to be easy.

The modeling work, led in part by scientists at Ohio State University, dissected different treatment options for the Western Lake Erie Watershed. Its findings help to show the reduction target can be achieved without drastically altering the region’s farmland.

Noel Aloysius, a postdoctoral research scientist in the Department of Food, Agricultural and Biological Engineering at Ohio State, recently discussed the project during a meeting of Great Lakes reporters hosted by Ohio State University’s Stone Laboratory on Lake Erie’s Gibraltar Island. In addition to those from Ohio State, the modeling project involved researchers from Heidelberg University, LimnoTech, University of Michigan, University of Toledo, the U.S. Department of Agriculture and the U.S. Geological Survey.

He presented some encouraging news for tackling the target, which is aimed to be reached by 2025.

“What we did was bring together all these groups with the specific goal of finding different ways to achieve this goal of reducing the load by 40 percent,” said Aloysius. “How can we achieve this?” To begin, the modeling groups decided to focus on a period between 2005 and 2014. Using a common historical period helped them to validate their models, and the period was also ideal because it included a good mix of watershed changes such as drought years and the rainy season in 2011 that spurred a record bloom.

They considered the sources for nutrients, like septic systems, wastewater treatment plants and runoff as well as how fertilizers are applied. The group found that around 85 percent of the nutrients that make it into western Lake Erie from the Maumee River basin come from fertilizers, regardless if they’re organic or of chemical origin.

Their efforts showed that removing all the point sources of pollution from the watershed, those from treatment plants for example, would only temper the nutrients going in by about 5 percent.

“If you remove all the point-source discharges, how much reduction? And then we started looking at the extreme cases,” said Aloysius. “For example, if we … reduce or convert agricultural land by 10 percent, 25 percent, 50 percent to grassland — what will happen?”

Aloysius says some of those are extreme scenarios because they’re highly unlikely to happen. But modeling them is valuable considering the mix of treatment schemes possible. The 50 percent grassland scenario would achieve the reduction, researchers found.

Modelers considered how installing cover crops and filter strips would help. Or targeting the application of fertilizers as well as converting large areas to grassland. In all, there were around 15 different methods or treatments considered. They then sought to learn whether a random or targeted scheme of treatments would have better results. Being more selective won out.

“What we see is, out of these scenarios we looked at, the targeted, across the 50 percent of the land, results as the most plausible scenario,” said Aloysius. “… How are we going to target it, who is going to pay for it? Those kinds of things we have not looked at.”

So what needs to happen to reach the target? Aloysius says that it will take a lot of farmers stepping up to apply treatments on their lands.

Many farmers are already doing those things, he says, and trends year over year have shown that more are adopting better practices. We just need to get the pace of their adoption to increase.

Programs like the Nature Conservancy’s 4R Nutrient Stewardship Program have helped. Another, the Tri-State Western Lake Erie Basin Phosphorus Reduction Initiative, has too.

“We see things happening, but what we suggest is that we need to accelerate the adoption of these practices in order to achieve the target by 2025,” said Aloysius. “What I want to emphasize is that there are multiple pathways. There are extreme cases, like we convert half the land to grassland … but there are alternate pathways to get there. … It is possible without compromising the farm productivity. We can achieve this target.”

Funding for the work was provided in part by the National Science Foundation.