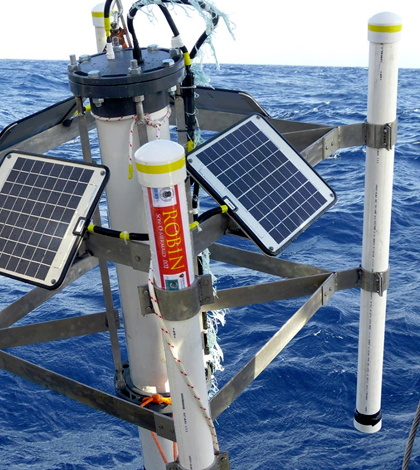 A Son-O-MERMAID instrument is attached to a crane and lowered into the ocean. The researchers then reel out 1,000 meters (more than 3,200 feet) of cable that connect the surface buoy to hydrophones for monitoring earthquakes in the ocean. (Credit: Frederik Simons / Princeton University)

Earthquakes have never been easy to study in the oceans, but documenting their processes is important as scientists continue to conquer the data-poor seas. Ocean-bottom seismometers are relatively commonly used to gauge quakes undersea, and moored hydrophone systems pick up the odd earthquake as well. But those tools are expensive and difficult to deploy, sometimes requiring diving or travel on large research vessels. Enter the Son-O-Mermaid, a platform developed over the course of decades to make things simpler and much less costly.

The system is an amazing tool and has proven its utility in earthquake sensing through deployments recently completed in the Atlantic Ocean. Its main developer, Frederik Simons, associate professor of geosciences at Princeton University, looked to a few global ocean networks for inspiration, including the Argo network of floats. Another relative is the the Southern Ocean Carbon and Climate Observations and Modeling (SOCCOM) program.

The Argo network currently has 3,918 floats in the ocean measuring basic conditions like temperature and salinity. SOCCOM is using similar tech to sample for biogeochemical parameters in the Southern Ocean.

“But we are physical scientists of the solid Earth and we want to listen,” said Simons. To do that, he and others involved in the effort use the Son-O-Mermaid. It is a second-generation platform following the MERMAID, which stands for Mobile Earthquake Recording in Marine Areas by Independent Divers. Unlike traditional ocean-bottom seismometers, which are placed in stationary locations and must be retrieved to obtain their data, Son-O-Mermaid drifts with ocean currents and regularly reports data back to scientists using satellite technology. Several can be deployed for the same cost as one ocean-bottom seismometer. (Credit: Frederik Simons / Princeton University)

The first-gen MERMAID, as similar to what Argo floats do today, collected sound wave data with sonar and then floated to the water’s surface to broadcast data back to researchers via satellite. It was powered with batteries. The Son-O-Mermaid, named in homage to sonobuoys — expendable sonar systems typically dropped from airplanes — and because it is a design update, improves on the original by adding solar power and complete operation at the surface. No more surfacing needed.

Hydrophones hanging beneath the Son-O-Mermaid, on cables up to 1,000 meters (3,281 feet), listen closely to all the sounds in the ocean. These can come from whales and other marine life, but also oil exploration operations, submarine movements, underwater volcanic eruptions and many other disturbances.

The big question for many years was how to filter out all that noise and only report earthquakes that occur in the ocean. Thankfully, a lot of time and effort yielded a solution.

“That’s a scientific, engineering problem. We’ve found appropriate algorithmic formulas that we know work very well. It was a challenge at the beginning, but it’s no longer difficult,” said Simons. “I worked in 2003 on this. Initially that was our problem, so we looked at arrays and listened to hundreds of hours from hydrophones and came up with algorithms. They’re much improved now and we now know what we’re looking for. We’re not making an active measurement, we’re listening. Like in astronomy, we’re looking at everything.”

Simons likens the algorithms to popular technology in existence today. In home burglary alarm systems, the tech can tell the difference between the loud shattering of a window and a slamming garage door. Likewise, accelerometers in Apple’s iPhone can tell when the phone falls or shakes — some scientists have even used them as makeshift seismometers in a pinch — but they quickly adapt to phone calls and being placed near to the user’s ear.

It’s that sort of technology-engineering mashup that has made Son-O-Mermaid possible, Simons says. Without it, telling whale sounds apart from earthquakes, which are easy to distinguish from their pitch and frequency modulation patterns, wouldn’t be autonomously possible at the resolution that scientists need. That’s especially true given the global scope of this effort.

“The beauty of our project is that we want to record earthquakes from anywhere, everywhere,” said Simons, discussing the Indian Ocean deployment of MERMAID. There wasn’t a specific reason for the launch there, but researchers hadn’t tested any similar technology in the area before. During the deployment, the MERMAID fleet measured 250 earthquakes from across the planet in just a few days. “Any seismometer that you purchase today will pick up things all over the globe. We use that to study the interior of the Earth, but we need to conquer the oceans.” He likens their approach to that of CAT scans that produce cross-sectional images of patients using X-rays. The idea is to do the same thing with the Earth, on a much grander scale.

“Visualize the entire Earth between the point where you are and the point where the earthquake came from. So imagine a quake in Japan and you’re in Boston,” said Simons. “Then we record the quake in many different places and fill in the gaps.”

But there are lots of constraints on getting to a point where that sort of data collection would be possible. Clearly, Son-O-Mermaid deployments would have to be scaled up significantly.

The real advantages to the system at this point are its launch flexibility — it can be deployed from any boat, not just research vessels with expensive ship time rates — and its low cost by comparison, at $20,000 per unit. It also has the potential to stay deployed for years thanks to its solar-charging system and long-life batteries. Simons doesn’t know for exactly how long, but 2 to 5 years is a decent estimate.

In the future, however, collaboration between scientists using the Son-O-Mermaid platform may spur it to its full potential because the float can hold much more than just the hydrophones used for earthquake detection.

“We are building a specific thing for a specific purpose, but we are also building a vehicle that can carry other instruments. In the next-generation Son-O-Mermaid, there will be ports for more sensors,” said Simons. “The industry needs to start thinking of a sensor as a cable that connects to a data logger and goes anywhere. Of course, miniaturized, rugged and dependable, but in the end a piece of cable to plug in so we can say, ‘Alright, we’re going to the Indian Ocean. Is there anyone who wants to send a sensor along?’ Then we would send you that data … The seismology is a niche application but a demanding one and we will take on payload. If a sensor is small enough, we will take it.”

Top image: A Son-O-Mermaid instrument is attached to a crane and lowered into the ocean. The researchers then reel out 1,000 meters (more than 3,200 feet) of cable that connect the surface buoy to hydrophones for monitoring earthquakes in the ocean. (Credit: Frederik Simons / Princeton University)