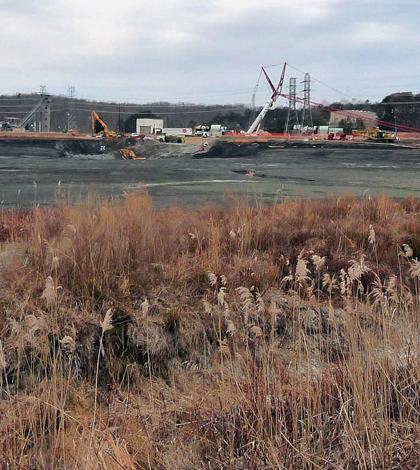 Fly ash ponds can be dangerous to surrounding soils and waterways if they’re not constructed correctly. But even if they’re built with linings of clay soils or membranes, there is still need to manage their functions to ensure that what they hold — byproducts of coal burning — stays put.

Experts at Los Alamos Technical Associates (LATA) have some experience with that. They recently helped manage the water levels in a fly ash pond near a coal-burning power plant in Kentucky.

Alongside the sonar, Hoehnke says that his crew also used a fishfinder to view the bottom of the pond. And each time the pumps were rarely shut off, they also validated sonar altimeter measurements with a tape measure extended to the bottom of the 60-acre pond.

That was important, because a great deal of interference (electronic “noise”) was being produced by the 200-horsepower pumps on site. Coal plant staff had also rigged up a 1-megawatt generator and the power lines added to it too.

“Without the interference, it worked great. The equipment (sonar altimeter) did what it was supposed to do when there was no resistance,” said Hoehnke. “But the power lines caused massive noise.”

Still Hoehnke and others at LATA were able to gather the data they needed, delivered straight to a PLC (programmable logic controller), to ensure the project went off without a hitch. More importantly, aquatic life in waterways downstream remained unaffected by operations.

That was helped by a custom system that engineers from Los Alamos Technical Associates developed to maintain pumping at the speeds they needed.

“We built a variable frequency drive to maintain pump speed,” said Hoehnke. “… It gives us the ability to adjust the speed, to speed up and slow down, from a set point.”