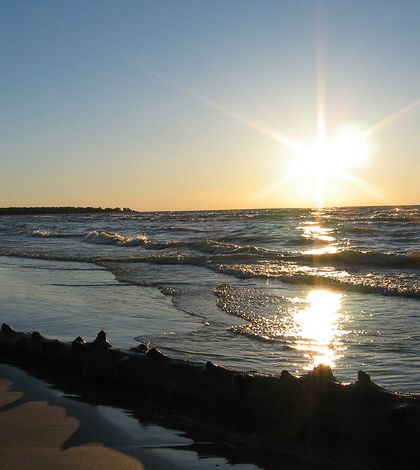 Harvesting timber to make way for expanded agricultural use of land throughout the Saginaw Bay watershed pumped a lot of excess sediments into its streams. These were transported downstream into Lake Huron where they have contributed to a decline in the Bay’s rock reefs, important habitats that support the spawning of all sorts of fish.

The degradation of these rock reefs understandably concerns fisheries biologists. Walleye, they say, have been much too reliant on spawning in surrounding rivers than in Saginaw Bay itself in recent years. If some of the reefs could be rebuilt, walleye, as well as other important Great Lakes fish species, would have more places to spawn, possibly increasing their resiliency over the long term.

But how do you get there? It’s not a good idea to just start dumping rocks into a prominent bay of Lake Huron. It’s important to have some background knowledge of what’s there so that the benefits of such restoration work can be maximized.

To that end, researchers with the Michigan Department of Natural Resources have helped to lead an effort looking at four reef sites in Saginaw Bay. Two of the sites, remnant reefs, are located near the North Island Reef and Duck Reef. The other two sites were the Coreyon Reef and another at the mouth of the Saginaw River. Both of these are being considered for the placement of new reefs.

“When we think of reef restoration, we think of returning the substrate to a hard, natural cobble material,” said Todd Wills, Lake Huron – Lake Erie Area research manager at the Michigan DNR. “It’s the interstitial spaces between the rocks. Fish would spawn on those, and the eggs would drop down in them and be protected.”

To assess the likelihood that the reef sites would be successful in restoration scenarios, Wills and others from many partner institutions looked at variables like bottom hardness and bathymetry as well as each area’s contours.

The scientists used a fairly common technology to get the job done: side-scan sonar mounted on a boat. But instead of opting for some of the standard tools to implement it, researchers tried a new approach. “We used a consumer-grade side imager, a Humminbird 998c SI (fish finder). It’s kind of slick. We have high-end units, but we’ve been exploring the utility of these consumer-grade units that fishermen can buy,” said Wills. “We popped in an SD (memory) card and have grid lines that we followed to gather data. It’s kind of like a kid’s video game. We can see the boat on there and following the lines creates a grid, ensuring that we get the necessary coverage.”

That type of surveying was done on all four reefs. Processing the data didn’t take long, Wills says, only about 30 minutes for a site. Researchers relied on DrDepth, a software that converts the data into complete, useful images. The software itself is a bit of a throwback, as Johnson Outdoors bought it years ago and re-released it under a different name with more features for anglers and without some of the features that scientists liked about it. So Wills and others kept the copy they had in case it would come in handy.

The software produced some beautiful 3D images of the reef sites as well as 2D depictions of their bathymetry and data on each site’s substrates. These were combined with water quality measurements that scientists took at each site on parameters including dissolved oxygen, turbidity, conductivity and temperature.

It’s not yet clear which Saginaw Bay reef sites are most suited for restoration, Wills says. And he and others are still working to complete some remaining goals of the reef assessment, including a look at potential predators that could prey on eggs laid in the reefs; how adult fish use the reef sites for spawning currently; and the genetic diversity of lake whitefish and walleye around the areas and in nearby rivers.

“River-spawning walleye have really carried the fishery in Saginaw Bay,” said Wills. “Reef spawning is much lower and less abundant. So the thought is that restoring habitat for reef spawning would help walleye by improving their resilience. By having two spawning stocks, that would increase the resiliency of the population to withstand some sort of environmental disaster.”

Of course, other fish like lake whitefish, smallmouth bass, cisco fish, suckers and lake trout could benefit from restored reefs. As a proof of concept, Wills points to recent restorations that have succeeded near the St. Clair River. He says that some of those restored reefs saw 16 to 17 percent of native fish returning to spawn, according to U.S. Geological Survey data.

Many partners are involved in the ongoing work, either through funding or participation. They include Bay County in Michigan, LimnoTech, Michigan Department of Environmental Quality, Michigan Sea Grant, Purdue University, U.S. Fish and Wildlife Service and the U.S. Geological Survey.