Students Wading Into Citizen Science in the Schuylkill River 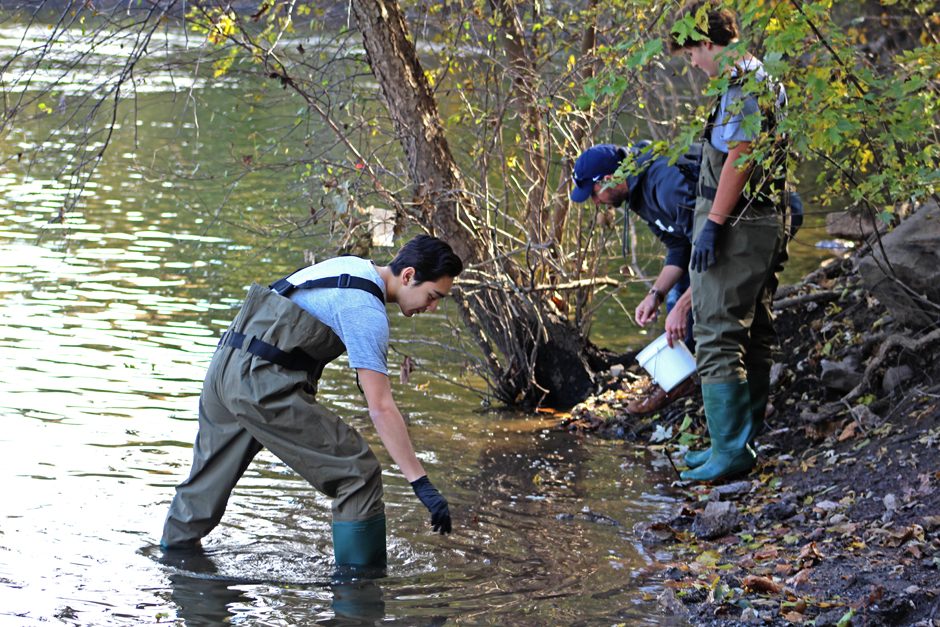 A student team works near the shore. (Credit: Schuylkill River Greenways, via source)

Sometimes if you want to teach kids about water quality, you just need to wade into the subject—at least, that’s the plan between Schuylkill River Greenways (SRG) and the Stroud Water Research Center (SWRC). Citizen science group project facilitator David Bressler of SWRC and SRG education coordinator Sarah Crothers spoke with EM about the environmental education program between SWRC and The Hill School in the Schuylkill River Greenways National Heritage Area.

“I started an environmental and watershed education program called Schuylkill Explorers,” explains Ms. Crothers.“The program reaches all ages, and with our Stroud partnership, we began doing water quality testing with high school students this past fall. We received a grant from the William Penn Foundation to work with the people in our community on water quality testing. The grant allowed us to buy a monitor that we placed in the river, and it sends real-time information to a website approximately every five minutes.”

“The Hill School is a well-known establishment in the area which Schuylkill River Greenways has been wanting to connect with,” explains Ms. Crothers. “It’s a preparatory boarding school. We contacted their environmental science teacher, Brett Dioguardi. He was excited about the idea of working with the community, and the opportunity for hands-on, experiential learning.”

Ms. Crothers worked with Mr. Bressler of the SWRC to educate The Hill School students. 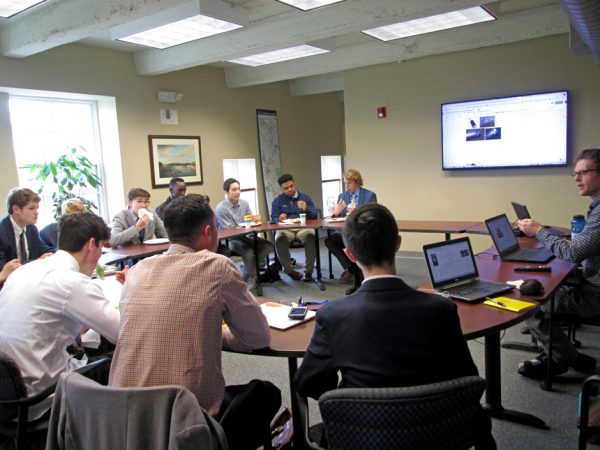 “I was working with Sarah on these EnviroDIY sensor stations, which are designed and engineered here at the Stroud Center,” says Mr. Bressler. “They collect continuous data for a number of different parameters—conductivity, temperature, depth, turbidity are the standard ones, and Sarah’s group has a dissolved oxygen probe as well. Every five minutes the sensors log the data in a card in the sensor station itself, on-site, and they transfer the data via cell signal to an online data portal.”

Knowing more about each of these water quality parameters and how to analyze them helped the students develop a deeper appreciation for their watershed.

“The timing worked out well and the students were able to come when the water quality sensor was installed in the river,” details Ms. Crothers. “The students learned how to complete the field data sheet when checking on the sensor to ensure it was working correctly and how to record the data. We measured everything by hand with testing kits, similar to how the average scientist would measure the water quality indicators on the ground, in order to better understand the indicators the probe measures for us.”

From the perspective of Mr. Bressler’s team, one of the primary purposes of these monitoring stations is education. 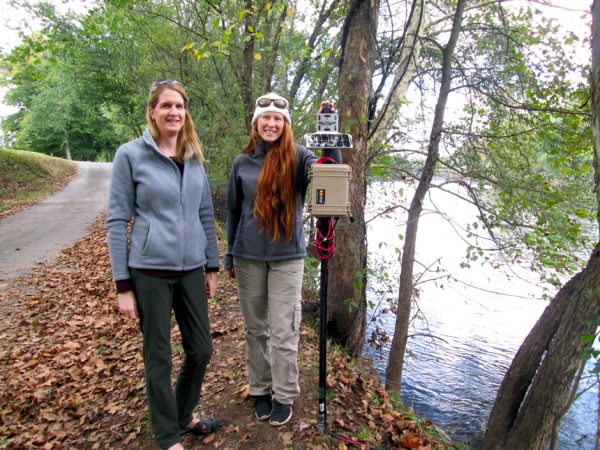 “We’re deploying stations all over, primarily in the Delaware Basin,” states Mr. Bressler. “They are being used for any number of watershed monitoring-oriented reasons. In some cases, we’re deploying them specifically with schools. In those cases, they’re often at the forefront of lesson plans and curricula associated with the information from the stations, and then using some other tools, such as Model My Watershed and Monitor My Watershed, which is where the data from these stations are collected.”

The Hill School students acquired important hands-on experience from their work in and on the river—for example, testing dissolved oxygen levels.

“We conducted the dissolved oxygen test, and then we compared our results to the levels they learned about in class when studying eutrophication, dead zones, and the importance of oxygen levels,” Ms. Crothers describes. “The students compared the numbers of the Schuylkill River with levels considered to be dangerous. They saw that it’s actually a very healthy river. It’s able to support many different species. In our area of the river, the oxygen levels are healthy. The nitrate and phosphate levels are low, which is good because we have a lot of agriculture in this area and those indicators are closely related to fertilizer and pesticides.”

For locals, this is a big deal. Like other rivers in urban areas, the Schuylkill is still living down an industrial past and a resulting “dirty” reputation.

“It was used to transport coal from the Appalachian Region down to Philadelphia and other areas,” remarks Ms. Crothers. “The Schuylkill River became extremely dirty. In 1945, Pennsylvania promulgated the first major environmental cleanup of its kind undertaken by a U.S. government agency to clean up the river since it provides drinking water for approximately 1.5 million people.  Even with recent cleanup efforts, people still perceive the Schuylkill River as dirty because of its industrial history. They don’t realize how much cleaner the water is, even from just 20 years ago. The Hill School students, many who aren’t residents of the community, still hear people talk about the river being dirty. This is especially true after a big storm event when people say, ‘Oh, it looks like chocolate milk. It’s polluted.’” 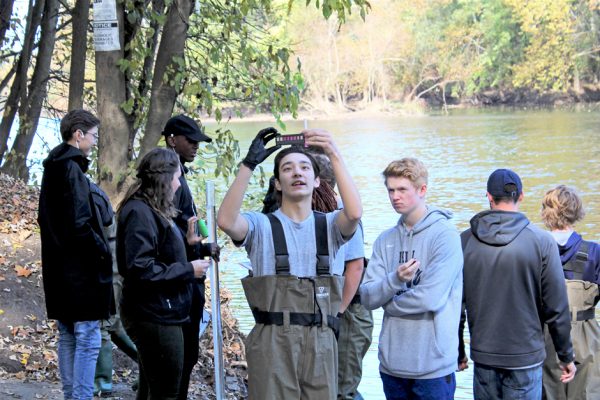 Thanks to seeing water quality monitoring in action, the students know that the churning, brown waters of the river after a storm don’t necessarily signal bad water.

“Now they understand that although it may look muddy after rain, the difference in color is because surrounding sediments get washed into the river after a storm,” comments Ms. Crothers. “Before the watershed lessons, the students didn’t realize the water that comes out of their sink faucet is from the Schuylkill. Just the idea of a watershed was a learning experience for them. They are now more informed about where water comes from, and how what we do on land impacts the water we drink and use daily. The students have become more open-minded, and have more questions about water systems.”

SRG hopes to continue working with The Hill School students, and other organizations as the program develops and adds additional projects.

“The teacher we’ve been working with, Mr. Dioguardi, is really supportive and flexible,” remarks Ms. Crothers. “He allowed me to come in during one of their labs and do a presentation on the bigger Delaware River watershed which includes the Schuylkill. We talked about threats to the watershed and the people who work to improve the quality as well as protect it. Mr. Dioguardi is also the moderator for The Hill School’s Eco Action Club.”

The SRG team plans to work with students to plant more native plants and trees, reinforce riparian buffers, and take readings on E. coli after major storms to assess the effect of combined sewer overflow systems. The team also hopes to do more benthic macroinvertebrate sampling.

“The day we went out, it was a really muddy river bed, so we didn’t get to collect that many macroinvertebrates,” states Ms. Crothers. “We plan to sample E. coli with the students since it only takes 24 hours to incubate. Ultimately, we hope some of the students, especially those who live there at school during the summertime, do a bigger project on this subject as an independent study.  We want all the students to continue to have an interest in water systems and drinking water sources. 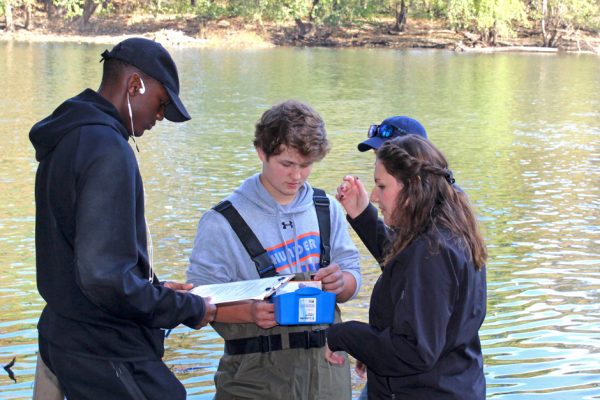 This, too, is a longer-term goal for the SWRC team—keeping students interested by getting them into the routine and asking deeper questions.

“The primary purpose is getting students out to do actual physical logistical things,” adds Mr. Bressler. “The teachers use them in their classes, so students can do real-life science, like cleaning the sensors, downloading the data, looking at the data, and troubleshooting, either ecologically or actually with the function of the station.”

The broader value of citizen science

Although there’s no question that citizen science is pedagogically useful, for both the Schuylkill River Greenways and Stroud Water Resource Center, citizen science has a broader meaning.

“This type of citizen science effort can, more broadly, be about cultural science literacy,” explains Mr. Bressler. “A lot of people don’t think stream and watershed health equates to human health, but it really does. That, I think, is where the broader citizen science movement is definitely making progress: establishing a kind of societal knowledge on cause and effect and on the interconnectivity between what’s happening on the landscape and in the stream, and who’s using that water and how are they using it.”

This is part of the long-term goal for SRG’s educational initiatives: a more informed public.

“Our whole goal is really just to understand the significance of what’s happening in the river and watershed, then communicate the information to the public,” details Ms. Crothers. “Many people in this area still think the Schuylkill is unclean, and don’t realize their drinking water comes from it. That mindset creates a lot of potential issues. When you perceive a natural resource to be dirty, you don’t realize the true value of protecting it.  People are working hard to continually improve the quality of the water, and the state of our watersheds directly impacts the health of our communities.” 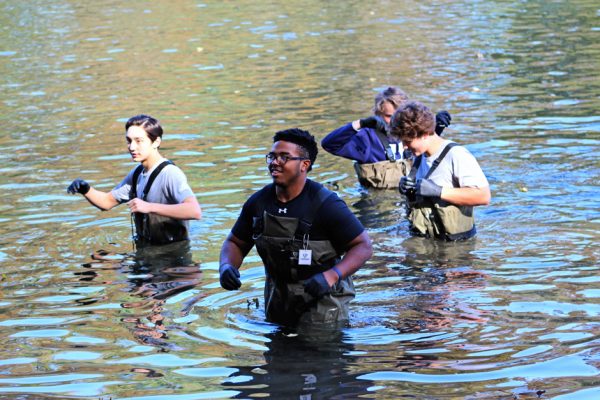 One of the greatest benefits Mr. Bressler and the SWRC team sees in modern water monitoring technologies is the ability to make this kind of work more standardized, more easily used for broader scale analysis, and more easily accessible to people with less expert input.

“Citizen science is a very broad term, but a lot of it seems to be about what technology allows now,” states Mr. Bressler. “For students, they can look at data patterns and relate those patterns to what they know about watershed science and can begin asking questions like ‘Okay, what do the data mean for the ecology of this situation? How does this ecological situation relate to the way the watershed and landscape is being managed?’”

In other words, the technologies are enabling new kinds of innovation, because they are making different forms of collaboration possible.

“I think a major component of what we’re doing is that it’s very collaborative, these things just come about organically,” adds Mr. Bressler. “Citizen science’s functionality is really dependent on there being a diversity of individuals involved, all the way from super techy, PhD-level people, all the way down to dedicated volunteers who have no science background, but really commit to doing it, to learning the science and the process.”