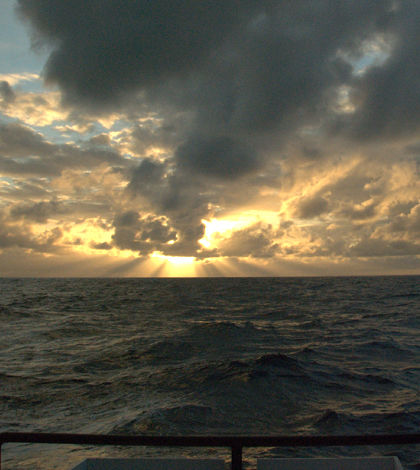 We don’t know as much about the oceans as we’d like to. In fact, many scientists studying in the salty seas that we have on our planet would call us desperately data poor. Of the ocean instrument arrays that are deployed today, the oldest are only about 25 years old. That’s not long in terms of Earth’s history for recording trends.

And even though we do have some idea of how the oceans heat up and cool down, or how the weather patterns that rise off them work, including El Niño and La Niña, there is still much left to discover. Even knowledge of the movements that ocean currents make is something that still eludes us.

One study published in Geophysical Research Letters and authored by researchers at Stanford University and Oregon State University details one effort that has shed a little more light on one ocean current, the meridional overturning circulation, a global conveyor belt of water that carries cool waters that sink in the polar regions toward the tropical regions where they mix with warmer waters and rise to the surface.

In these areas, the question of turbulence is an important one to answer in determining how currents behave. And rough topography typically produces a lot of small-scale turbulence. But the investigation, led by Ryan Holmes, at the time a graduate student at Stanford’s School of Earth, Energy & Environmental Science, found that the small amounts of turbulence were still present even if there was no rough sea bottom around. Holmes is now a postdoctoral research associate at Australia’s University of New South Wales.

The investigation took place on the Research Vessel Oceanus in a part of the equatorial Pacific Ocean and relied on measurements taken by a special sensor called a chi-pod. It measures temperature gradients at high resolution using fast-response thermistors mounted on a cage holding conductivity, temperature and depth sensors. Those data, brought together, can be used to estimate turbulence. The chi-pod was lowered into the ocean to profile turbulence all the way from the surface to 5 meters above the bottom. The device sampled distances of 4,000 meters, or about 2.5 miles, along the way.

Two weeks into the cruise, the team noticed a patch of strong turbulence occurring along a 700-meter (2,300-foot) vertical stretch of water near the ocean bottom. But there was no rough topography in the area, so what was going on? This was the head-scratcher that Holmes and others set out to answer.

“Most previous knowledge has suggested that energetic turbulence in the deep ocean occurs mainly over rough seafloor topography – i.e. over underwater mountains and ridges,” said Holmes. “However, we found strong turbulence in a region where the seafloor was flat, which was indeed surprising.”

“You could imagine in some ways how it could happen, but there’s no evidence of it ever occurring before,” said Jim Moum, professor of physical oceanography at Oregon State University. “The nearest observation of strong ocean turbulence associated with rough topography was 1,000 kilometers away. So it was surprising.”

Moum was responsible for organizing the five-week research cruise to study ocean mixing and invited Holmes, who had been studying equatorial mixing in ocean models for his doctoral dissertation.

Understanding the geographical distribution of turbulence in the ocean is something that has been key for some time, Moum says, because it’s critical in determining how the ocean mixes. And so he and others looked at the measurements and began describing what they saw. But it wasn’t enough.

“We needed a dynamical explanation, and it took some clever thinking and numerical modeling,” said Moum. Using computer models, the two simulated how winds blowing across the ocean surface can generate internal waves that propagate vertically down through the ocean depths and transport the energy required to mix waters at the seafloor. But still, their model was not able to reproduce the observed mixing.

So Thomas got the idea to integrate something not usually considered in ocean models: the horizontal component of the Earth’s rotation. And once Holmes plugged it in, the models began to make sense, revealing that the subtle vertical motion imparted on moving objects by the horizontal component of Earth’s rotation could disrupt the internal waves enough to generate turbulence.

“When including the effects of the horizontal component of Earth’s spin on the behavior of these waves, we found that they could ‘break’ on the seafloor near the equator and generate turbulence similar to how surface waves break on the beach,” said Holmes. “Thus these surface-generated internal waves constitute one mechanism that could explain our observations of energetic turbulence over a flat seafloor.”

The results are helpful in improving understanding of the dynamics responsible for generating turbulence in the ocean, the researchers say.

“Our results suggest that there may still be some significant gaps in our knowledge of the processes that generate turbulence in the deep ocean near the equator,” said Holmes.

And there are plans to post the data from the effort, as well as those from about eight years’ worth of profiling measurements made in the surface ocean, in a publicly accessible database in the future.

“What we’re trying to do is extend these measurements for many El Niño – La Niña cycles that will tell us the roles of small-scale turbulence in El Niño and La Niña,” said Moum, noting some of his recent studies. “They’re both long processes, about five to eight years, and we want to get as many cycles as we can. But partly we’re data poor because we only started systematic measurements fairly recently.”

Some of the instrument arrays throughout the world’s oceans that are helping to fill that data gap include the TAO array in the Pacific Ocean; the PIRATA array in the Atlantic; and the Argo network of floating profilers. The measurements collected by instruments in those arrays and human observers will ultimately get used in models to make future climate predictions more accurate.

Support for the research was provided by the National Science Foundation.