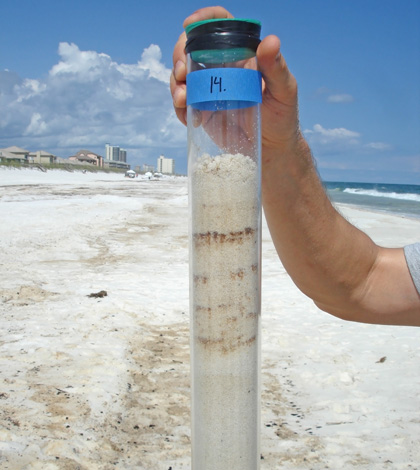 Oil dispersants quickly dissipated oil during the Deepwater Horizon oil spill, but the same chemicals may be causing oil to remain deposited deep in Gulf of Mexico beaches.

“At the moment it is difficult to say whether the positive or negative effects will dominate with the dispersants,” said and Markus Huettel, a professor of benthic ecology at Florida State University and coauthor of the study.

Huettel and Alissa Zuijdgeest, a graduate student at the Swiss Federal Institute of Technology, noticed that sand on Florida’s typically bleached-white beaches was becoming stained. Digging down, they found the stains persisted as deep as two feet. “The sand was not white,” said Huettel. “It had this tannish-brown color and if you grab the sand it had this soapy, oilish feeling.”

Something else was helping oil penetrate deep into the sand, and Huettel and Zuijdgeest thought it could be the 1.8 million gallons of dispersants sprayed into the gulf.

The two tested oil’s ability to penetrate into sand with and without dispersants.  They used acrylic tubes filled with sand to perform laboratory experiments. The tubes had a valve at the bottom to allow water to percolate through sand.

The researchers used the tubes in two experiments. The first looked at fluids draining through short, 10 centimeter deep columns of sand. The second used varying depths of sand, up to 50 centimeters.

For both experiments, one tube housed plain sea water, one housed oil collected from the Macondo 252 well, and one had a combination of oil and the dispersant Corexit used in the spill.

The fluids were poured over the sand columns. Zuijdgeest and Huettel used a fiber optic probe to determine fluorescent distribution of hydrocarbons in the sand at different depths.  Hydrocarbons from water used in the columns were analyzed by an Agilent gas chromatograph coupled to a mass spectrometer.

Results showed hydrocarbons traveled down 10 centimeters to the bottom of the short sand columns. They found undispersed oil was deposited only in the very top layers of sand, never exceeding 3 centimeters.

In the deeper sand columns, the dispersed oil traveled as deep as approximately 35 centimeters before the fluorometer no longer detected it.  The researchers then flushed water through the deep columns to mimic the effect of a wave. They found dispersed oil would continue to penetrate deeper with each flush, moving peak fluorescence down in the sand columns.

The researchers also tested penetration of oil into sediment in real world conditions. They stationed experimental chambers in the shallow water near Florida’s Pensacola beaches.  The chambers enclosed a 15 centimeter-tall by 19 centimeter-wide water column. Spinning disks at the top of each chamber exchanged water between sediment and water, mimicking the effects of waves and bottom currents.

The researchers put small tar balls collected at the site into the upper layers of the chamber sediment for the first testing round. For the second round, a dispersant was added to some of the chambers with tar material.  They measured fluorescence in the water for 20 hours during both experiments with Turner Designs fluorometers to assess the change of hydrocarbon concentrations in the chamber water.

The chamber experiments revealed that the oil dispersants increased the flux of hydrocarbons into the sediment compared to oil contaminated-water without dispersants.  The fluorometer also detected more polycyclic aromatic hydrocarbons in water after dispersants were added.

Looking at both experiments together, the researchers determined that dispersants can enhance the hydrocarbon penetration rate into sediment, in as little as one tidal wash, and can increase penetration depth which may also increase the time oil sticks around.

Oil degradation slows dramatically if it reaches deep sand layers that are low in oxygen. The tightly packed sand is low in oxygen that oil-consuming bacteria need.

In the long term, oil deposited in sediment could prove problematic to macroinvertebrates and groundwater nearby.  Polycyclic aromatic hydrocarbons could also wash back into the ocean.

Huettel said that the levels of polycyclic aromatic hydrocarbons they detected were less than U.S. Environmental Protection Agency thresholds for human health. However oil components could still have negative effects on small organisms, especially larvae.

While he can’t say definitively whether or not oil dispersants should be used again, Huettel said nature has mechanisms to deal with oil leaking from natural undersea seeps.  Granted, the seeps are certainly nowhere near the 205 million gallons of oil leaked into the water from the Deepwater Horizon spill.

Still, sometimes things are better left to operate with the fews variables possible. “I personally think that leaving it alone is the better strategy” Huettel said.