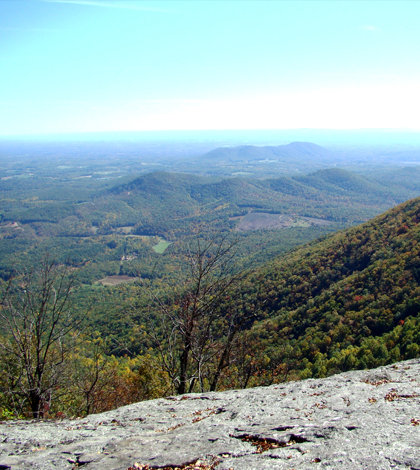 Hexavalent chromium is a carcinogen produced by a variety of manmade processes. But the results of a recent investigation by scientists at Duke University show that the contaminant can also be produced naturally by the leaching of volcanic rocks in aquifers. The find signals trouble for areas like the Piedmont region of North Carolina, and others, with groundwater supplies linked closely to the rock type.

Results of the work appear to contradict findings made by North Carolina environmental officials last year, who found potentially harmful levels of hexavalent chromium in groundwater wells near coal plants. The prevailing thought at the time was that leaking coal ash ponds were to blame.

To evaluate that assumption and others, researchers at Duke University relied on samples of groundwater from throughout the Piedmont region. More than 370 groundwater wells located both near and far from coal ash ponds across the region of central North Carolina were sampled.

The scientists used forensic geochemical tracers to analyze each sample collected, looking for a wide range of inorganic chemicals, including hexavalent chromium. The tracers, developed specially by the research team, allowed for identifying the geochemical fingerprints of contaminants in groundwater wells so that each could be traced back to its source.

In about 90 percent of the wells that researchers sampled, they found detectable levels of hexavalent chromium. The levels were above safe drinking water limits in many cases. But the geochemical fingerprints of the contaminant didn’t match up as much with coal ash ponds as some had thought.

Instead, researchers found that the element was more linked to natural sources. By considering that alongside the wide geographic distribution of samples that were found to contain elevated hexavalent chromium, regardless of proximity to a coal ash pond, it became clear to the scientists that natural leaching was the more likely source.

And because the contamination stems from water-rock interactions that are common across the Piedmont region and the southeastern United States, investigators say that people in a much larger geographic area may be at risk. Not only that, but millions of people in areas with similar aquifers worldwide may be exposed to hexavalent chromium without knowing it.

Scientists urge better protecting the health of North Carolinians from what researchers see as the naturally occurring threat of hexavalent chromium, as well as other harmful contaminants like arsenic and selenium that previous research has shown are derived from leaking coal ash ponds.

Scientists hope that their findings can lead more states to establish hexavalent chromium standards of their own. Full results of the work are published in the journal Environmental Science and Technology Letters.