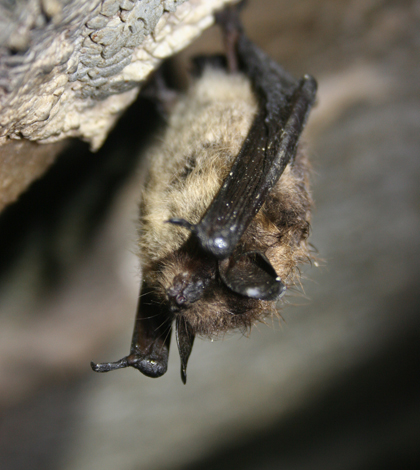 A new study of mercury levels in bats links higher concentrations in some colonies to the acidity of nearby lakes and rivers, further illuminating the paths this global atmospheric contaminant follows though aquatic and terrestrial ecosystems.

Previous research has shown that fish and other organisms in lakes with higher acidity tend to have higher mercury concentrations. This study from Nova Scotia shows the effect appears to extend to little brown bats, which feed on adult insects that live in aquatic habitats as juveniles.

“What we found was that the average water acidity in surrounding freshwater systems may be an important factor in increasing bioavailability of mercury in aquatic food chains leading to little brown bats,” wrote Linda Campbell, study co-author and a senior research fellow in environmental science at Saint Mary’s University, in an email.

The study, published online by the journal Environmental Science and Technology, came about after a bird ecotoxicologist, a bat biologist and a limnologist got together.

“While we didn’t all walk into a bar, our interests and expertise overlapped nicely,” said Campbell, the limnologist of the group.

She and Neil Burgess, a bird ecotoxicologist with Environment Canada, had worked together on a study that mapped mercury in sportfish and loons. That experience showed them the potential of developing geographical mercury studies out of large databases. They saw that potential in an archive of bat fur samples collected from across Atlantic Canada over 15 years or so by bat biologist Hugh Broders, also of Saint Mary’s University.

The bat fur archive was especially valuable because the samples were collected before any Nova Scotia colonies were afflicted with white-nose syndrome, a widespread fungal epidemic that has killed millions of bats across North America. The disease has since spread to mainland Nova Scotia, leading to restricted research access to those colonies.

The team chose to look at little brown bats for the females’ tendency to forage near their maternal colonies during pregnancy. That helps tighten the link between any diet-related effects and the local geographic area. Though some colonies sampled were in provincial and national parks, most were found in attics. Given her expertise in aquatic ecosystems health, Campbell said she was surprised to find herself working with archived bat fur. But environmental contaminants rarely respect the boundaries between ecosystems or scientific disciplines, so that sort of academic tourism comes with the territory.

“Our environment is so interconnected such that if I follow one strand, I will inevitably find myself going to new areas and working with new people, which is one of my favourite aspects about my job,” Campbell wrote.

After analyzing the bat fur samples for mercury concentrations, the researchers saw that the geographical variations in concentrations matched up with acidity patterns in previously published water quality maps of the same region. But employee turnover at Environment Canada meant only the raw data behind those maps was still available. The research team, including the study’s lead author, Megan Little, spent months reworking it into a usable dataset. A comparison of that dataset with the mercury fur concentrations dataset showed that female little brown bats eating aquatic insects from regions with more acidic lakes and rivers had higher mercury concentrations.

Campbell said a lack of exposure and toxicology research on bats makes it impossible to say for certain whether the colonies with higher mercury levels are suffering from the higher contaminant load. Some research has suggested that bats could be more tolerant of elevated mercury levels, but the concentrations the study found in colonies in southern Nova Scotia still warrant concern, she said. The research team would like to pursue some follow-up studies using similar methods to see if elevated concentrations are leading to increased stress or health issues.

The study highlights the ways mercury — from its global primary sources of coal burning, forest fires and gold mining — can infiltrate both aquatic and terrestrial ecosystems, accumulating and magnifying as it passes through their linked food chains.

Since aquatic ecosystems are especially to susceptible to mercury accumulation, “every living thing which depends on freshwater resources can be impacted,” Campbell wrote.

“What we are seeing for bats (is) not limited to just those little animals, but also can apply to other wildlife and even humans. What we are seeing shows we need to be more cautious about what contaminants we release into the environment.”