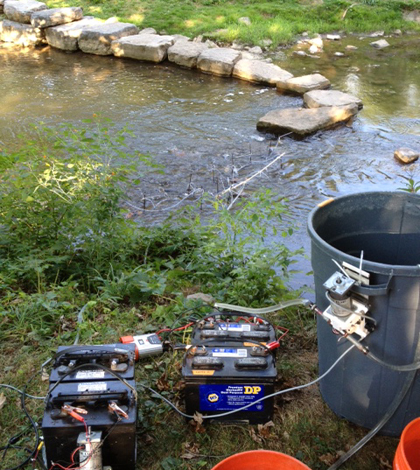 Planning stream restorations is becoming more important as the number of projects increases nationwide, in efforts to enhance water quality and habitat health of surrounding areas.

Researchers at the State University of New York College of Environmental Science and Forestry (SUNY ESF) and Syracuse University led a study of two streams in upstate New York that had undergone restoration. They found restoration work created large areas of “transient storage” where water is temporarily retained behind restoration structures that enhanced downwelling to rates not observed in reference reaches. In natural streams, these transient storage zones are known to host biological and chemical processes that allow the stream to clean itself. The results are important to future planning of stream restoration efforts.

The area under investigation was the Finger Lakes region, in particular Nine Mile Creek. All the region’s water drains north to Lake Ontario. Owego Creek, which is south of the region, was also studied.

“Water quality is critical because it provides unfiltered drinking water for the city of Syracuse, which has millions of tourists pass through for eco-tourism such as hiking, fishing, and winery tours. Syracuse gets tens of millions of gallons of Finger Lakes water each day for drinking water,” said Ted Endreny, professor of environmental resources engineering at SUNY ESF.

Endreny partnered with Laura Lautz, an associate professor of hydrogeology at Syracuse University. Also chipping in were Timothy Daniluk and Ryan Gordon, students at Syracuse at the time of study and Jesse Robinson, a student at SUNY ESF during the investigation. The study was funded by awards from the National Science Foundation and U.S. EPA. Its results were published in July 2012 by the journal Hydrological Processes.

They used Six Mile creek and Fall Creek as natural reference points for restoration activities conducted on Owego and Nine Mile, including the addition of cross vanes and J-hooks that help steer water flow. A cross vane is a structure built across a channel, of boulders or logs, to reduce stream velocity. J-hooks, another type of vane, reduce velocity by directing flow from the outside of a stream inward. Both structures help reduce bank erosion and improve aquatic habitats. They found that the geomorphology of the restored region should match well with the stream habitat and function on which its restoration is being modeled. This includes flow rates, upwelling and downwelling of water, and flux – all neat ways of describing the study into water’s movement between a stream and the surrounding ground, habitat or watershed.

To chart those metrics and, correspondingly, the effects of J-hooks and cross vanes installed on Owego and Nine Mile, a mix of ready-made sensors was used, as well as some custom instruments. Lautz worked with Syracuse’s machine shop to fabricate stainless steel rods to hold multiple iButtons for temperature measurements. The rods were inserted into the ground and the iButtons, which are water-resistant, were covered in a silicon skin during deployment to keep them dry and ensure quality data on temperature.

“We used temperature to measure the direction of water movement and speed,” said Lautz. “The great thing about using temperature is it’s really cheap, easy to measure in terms of sensing and you get lots of info.”

Other instruments yielded lots of other useful information. “Temperature data, tomography and conductivity probes,” said Endreny. “The YSI probes help us track high and low transience areas where it takes a long time for water to unload.” Piezometers were integral to testing the chemistry of water many centimeters below streambeds and peristaltic pumps were important to the tomography effort, says Endreny. Adam Ward at the University of Iowa helped with implementing tomography – imaging sections through the use of electrical geophysics – by installing steel dowels at two cross-sections of the stream and riparian zone. Cables were attached to the metal rods in a series, which were linked to a battery pack. Fluid Metering, Inc. peristaltic pumps pushed a salt solution into the stream at the rate of 15 liters per minute until the concentration of salt in the subsurface reached a level that was detectable by the geophysical monitoring. The pumps were stopped, and the strength of electrical signal through the subsurface between rods was monitored. The presence of salt between the rods increased the electrical conductivity and was used to image the presence of the salt tracer in the subsurface.  Imaging what is below the ground surface based on changes in observed physical properties is akin to medical CT (computed tomography) scanning.

Nikon Rugby auto levels with rod-eye detectors measured stream bed elevation to construct cross-section areas and the discharge was divided by those areas to get bulk velocity. Food coloring dyes were injected and monitored as they made their way downstream. That helped the researchers understand where velocity was greatest and smallest along stream reaches between cross-sections.

“Around restoration structures there are vortices and eddies and wake zones providing lots of transient storage,” said Endreny. “The stream cleans itself. There’s a good deal of plant uptake and microbial activity as well.”

Lautz pointed to an additional take-away from the study.

“If somebody like (U.S.) Fish and Wildlife wants to restore a stream, they have lots of choices,” said Lautz. “Cross vanes have benefits but they might not achieve all goals of the restoration project. It’s important to look at what you want to achieve in restoring a stream.”

Top image: Peristaltic pumps pushed in saltwater for a tomography effort near a J-hook