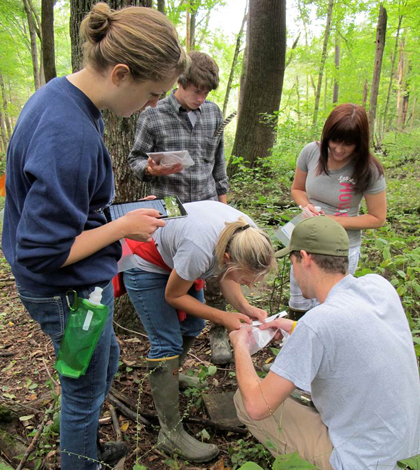 The cabbage’s capability to generate heat is one of many topics students in a Washington and Jefferson College ecology course investigate during a single semester of classes.

The ecology class starts with a trip to the Abernathy Field Station, a natural area where all students and faculty can contemplate science, literature, art or life itself.

Students in the school’s ecology capstone each choose a topic to study. At the end of the semester, they draw their conclusions and share findings with students, professors and the public at a student research symposium.

James March, an associate professor of biology at Washington and Jefferson College, teaches the class. He said each student asks their own question and pursues an answer using environmental monitoring technology at the school and field station. “Because of the small class size, you can allow students to pick their own project instead of just assigning them one,” he said.

Giving students a license to hypothesize as they please delivers varying results in the early stages of the class. March said some students quickly develop a solid idea, while others scratch their heads for a bit.

The short timeframe pushes students to be realistic with their questions and research expectations as the clock ticks toward presentation day. “It’s kind of like a mini master’s degree, but you only have three and a half months to do it,” March said. Eventually everyone settles on a topic and the research begins. Ecology students have studied everything from salamander habitats to dispersion of invasive plants.

Established historical data comes in especially handy as students may only have a month to do their fieldwork before they have to hide away in a library corner or dorm room processing data and writing up their findings.

Students often use small iButton temperature loggers during their research.  They were placed inside flowering Eastern skunk cabbages, where a student researcher found the plant usually is 1-4 degrees Celsius warmer than ambient temperature. “To me that’s one of the neat features of these iButtons is that they are so small you can stick them anywhere,” he said. The tiny temperature loggers were also used indoors to monitor building HVAC performance during an introduction to environmental studies class March teaches. He said temperature profiles of select areas have the potential to improve efficiency in building operation and even save money.

Time limitations and students’ inexperience limit the comprehensiveness of studies.  That leaves some students picking up where others left off or studying another element of the same question.

In the end, March said, the course is as much about carefully planning each step of the project to completion as it is about the results. “It’s the process that they learn from,” he said.