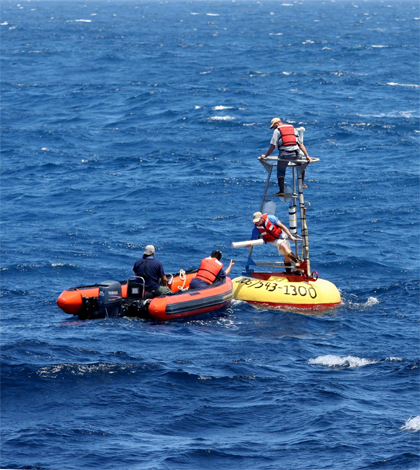 A crew works on the ocen mooring where the temperature sensors were deployed (Credit: Oregon State University)

While some scientists dedicate their lives to discovering the unknown about distant planets and faraway galaxies, new research is constantly showing that there is still a vast unexplored segment of earth that lies beneath the ocean.

A research team from Oregon State University’s College of Earth, Ocean, and Atmospheric Sciences led by Jim Moum and Jonathan Nash is doing their part to help discover how underwater currents might play a role in facilitating climate change and shifting ocean temperatures.

After receiving funding from the National Science Foundation in 2004, university researchers and engineers started a year-long process of developing special sensors powered by lithium batteries to monitor temperature shifts in an unusually cold region of the Pacific Ocean near the equator that covers an area roughly the size of the U.S.

Scientists have long hypothesized that the lower temperatures in the so-called “equatorial Pacific cold tongue” are due to the influx of colder water from the ocean’s depths being mixed up into warmer surface waters. The mixing had never been proven, however.

To test the water-mixing theory, researchers designed sensors to measure even the slightest temperature variations of the cold tongue’s waters down to a depth of about 80 meters.

University researchers then sent the sensors with the National Oceanic and Atmospheric Administration’s National Data Buoy Center to be attached to an existing mooring used as a fish aggregation device in the equatorial Pacific.

The sensors in the initial experiment only tracked area temperatures for six weeks of a scheduled six-month monitoring period before being destroyed by what was assumed to be the activity of a school of fish. However, the six-week monitoring period proved extremely beneficial for the researchers.

“The first deployment—when [the data] came back—was tremendously exciting because we could see for the first time that we were going to be able to get time series, long records of turbulence measurements that a lot of people thought was impossible,” Moum said. Learning from the shortcomings of the sensors in the trial run, researchers revised the sensor design to include a protective covering to help withstand the rough water.

The new design has worked wonders. Since the initial experiment in 2005, researchers have continued the monitoring by intermittently deploying additional sensors to the same area. Only now, the sensors routinely last over a year.

The data has provided researchers with new information on the nature of ocean mixing.

“What we were able to show is that the mixing of cold water from below exceeds—at least during the equatorial spring of the year—the rate which it is being heated from above, and this is what cools the sea’s surface,” Moum said. “That’s what we were able to quantify for the first time.”

Specifically, the data showed that water turbulence is due to a strong surface current that flows west and an undercurrent 100-120 meters below the surface that flows east. The disturbances initiated by these opposing forces are what cause the turbulence and modified sea temperature in the equatorial Pacific cold tongue.

Researchers say that it will take another 20-25 years to connect ocean temperature disturbances to climate-changing events with any kind of certainty because extreme events like La Niña and El Niño only occur every four to eight years.

Top image: A crew works on the ocean mooring where the temperature sensors were deployed (Credit: Oregon State University)