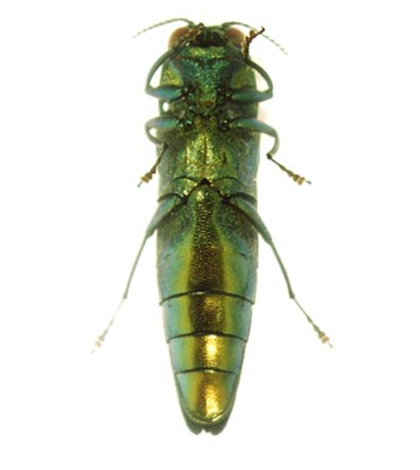 Nearly everyone has heard of or seen the mass destruction of ash trees brought about by the non-native emerald ash borer (EAB), but few people understand why it is so destructive compared to native borer species and what techniques work best for fighting back against EAB.

Sam Adams, arborist for Facilities Services at the University of Tennessee, Knoxville, however, has made it his mission to understand the terrible pests and use the best tools currently available to beat them back and save ash trees whenever possible.

“A typical treatment we use is a systemic treatment, a basal drench where we apply insecticides to the soil where the tree meets the ground. We use the neo-nicotinoid compound class for these treatments,” said Adams. “One is made by Bayer, it is called Merit and its active ingredient is imidacloprid. Another one is made by Valent, it’s called Safari and its active ingredient is dinotefuran. They are absorbed into the soil, then into the bark and cambium of the trees, where EAB larvae will ingest them.”

Adams also uses a stem-injected treatment, where imidacloprid capsules, made by Mauget, are placed into the trees using half- to 1-inch drilled holes that reach into the tree’s cambium near the ground. The capsules are pre-filled and pressurized. They are punctured with a feeder tube to become activated in the tree.

“Unlike some of the other pesticides we use, azadirachtin is considered organic,” Adams says. “It originates from the neem tree and naturally acts as an insect growth regulator. The insect eggs exposed to the azadirechtin turn to larvae and to adults, but the adult forms will fail to make eggs. Another good thing about it is it lasts two years, meaning fewer treatments than some of the others.”

But sometimes the previously listed pesticides fail to make a dent in the EAB infestation of an ash tree, Adams admits. Then it’s time to bring out some of the more aggressive pesticides, such as emamectin benzoate, which is very potent and restricted-use. Emamectin would not only target EAB but also people and other creatures. Residue from the pesticide also can remain in the leaves and get into the soil.

Adams prefers to use the less-aggressive pesticides whenever possible. “I view all the various techniques and products as tools that help keep trees alive. When I have a variety of tools available to me, I’ve got more options for various situations,” Adams says.

In terms of the latest advancements for fighting EAB, Adams says they are using cutting-edge technology. A recent advancement is that some of the treatments Adams has used in the past can now be directly applied to the bark.

In terms of why the EAB is so destructive compared to other pests, Adams says it is a combination of producing more eggs than other pests and digging more tunnels, thus producing more harmful activity inside the tree. A native ash borer, for example, will avoid digging tunnels near neighbors, leading to fewer tunnels than the EAB, who digs tunnels regardless of whether there are neighbors nearby.

However, no matter how tough the EAB is, strategies still exist to fight it. “There are two major types of EAB management,” Adams explains. “There’s forest management, which involves the many wild ash trees and is under the U.S. Forest Service. A forest management strategy might be cutting down and removing infested trees plus healthy ash trees in a zone around the infested ones, to prevent EAB spread. The second type is urban management, which is what I do on campus. In urban management you can make decisions about individual trees because there aren’t as many trees to consider.”

In Adams’ case, there are 800 acres to look over, so he monitors campus trees on a weekly basis and decides if the trees need treatment or if they have gotten to a point beyond treatment and need to be removed.

Adams does a visual check every week and is especially observant in months where the beetle is most active, typically May, June and July.

“We’ve been surprised about how quickly EAB has destroyed so many of Knoxville’s ash trees. EAB wasn’t recorded in Knoxville until 2010 and since then we’ve gone from 90 ash trees on campus to only 15 to 25 intact trees today,” Adams says.

Although EAB has proven to be a difficult adversary, Adams will continue to fight it. He plans to continue monitoring and treating trees on the University of Tennessee, Knoxville campus for years into the future. He also has the help of assistant Lydia Williams who is studying for her arborist certification.

Finally, Adams acknowledges that he has received some significant help in his struggle against EAB. “The U. of Tennessee at Knoxville has made some good decisions,” Adams says. “They hired a landscape manager, a turf manager and an arborist to specifically improve the overall management of the campus landscape. Fighting for the ash trees is difficult, but I am definitely thankful for the support they’ve given me. There are many campuses that don’t make such wise decisions in managing and monitoring their lands. I’m thankful this one does.”